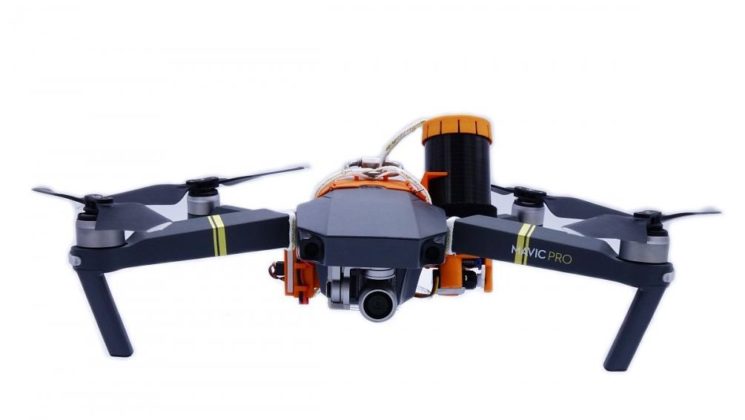 Drone parachutes are a cool invention that can protect both your drone and people below it in case something unpredictable happens. There are already some solutions on the market, and Fruity Chutes has recently launched the first available drone parachute system for the Mavic 2 Pro and Zoom.

The full name of the system is Fruity Chutes Mavic 2 Automatic Emergency Drone Parachute. The company writes that it’s “lightweight, easy to use, and reliable.” In case you need to use it, it’s designed so that you can pack and load it yourself instead of sending it back to the manufacturer. It can be used many times and folding and packing are made easy.

The centerpiece of the parachute system weighs just 0.96oz (27.7g). Fruity Chutes writes that parachute can easily work at heavier load weights of 2.4 kg (5 lbs) or more. Integrated nylon printed mount wraps around the center of your Mavic 2 and no screws are needed.

What’s also important is that the parachute system is entirely self-contained. In other words, it’s not reliant on the drone power, so it works even if the battery fails completely. The automatic trigger system (ATS) can detect if the drone suddenly falls, rolls, or flips. The manufacturer writes that “detection of a fall typically takes just 0.75 seconds or about 15 feet of free fall. By the time the pilot notices a problem, the parachute will already be ejected.”

Fruity Chutes isn’t the first drone parachute manufacturer on the market. ParaZero has already launched parachute systems for both manned and unmanned aircraft. They’re offering SafeAir parachutes for DJI’s Mavic Pro and Phantom series, but they haven’t launched the parachute system for the Mavic 2 series. At least not yet. So, if you’re in a rush to add a tiny parachute to your new Mavic 2, I guess Fruity Chutes has what you need. If you have $489 spare.

« Focus stacking: 89 images of an old screw
Stop using tape to attach your gels – use magnets instead »