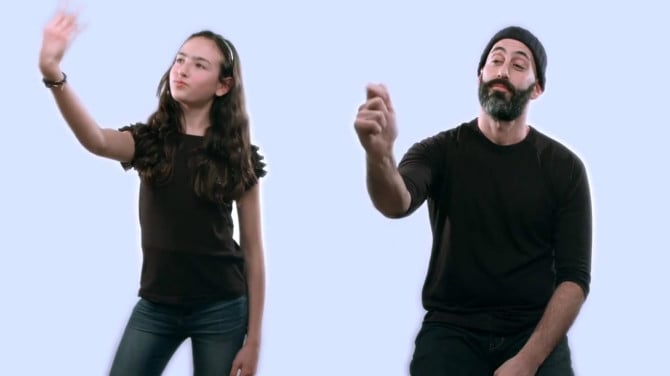 The birth of internet slang is fascinating stuff, I’m sure most of you will recall the hoopla that flooded the web when the word “selfie” became official when it was named as word of the year by Oxford Dictionaries. Soon after that, Merriam-Webster decided to induct it into it’s dictionaries, too. It had a lot of people wondering, “Who makes these words up?”

Though most of us wouldn’t give the thought too much of our time, the dedicated folks over at Hopes & Fears took that simple question and went one step further. They wanted to know how new words, such as the ever increasing dialect of internet slang, are incorporated into sign language. To find out how new slang words entered into American Sign Language (ASL), Hopes & Fears got in touch with Bill Vicars, a Deaf/Hard of Hearing (HH) man who runs Lifeprint–an educational website devoted to helping people learn ASL.

It turns out, the process of developing a new sign is a long process which is largely based on researching how people on the individual level are signing certain words. From there, the most widely used version will generally make it into Lifeprint lesson plan. There’s also a collaboration aspect involved. Once a new sign has been posted online, Vicars says he typically receives a lot of emails from people all around the country telling them how they sign a new word. The ASL speaking community as a whole, go back on forth on which is “correct” until, eventually, the sign which is most widely accepted by the group emerges as something akin to official. (According to Vicars, there is actually no “Official” ASL website.)

Hopes & Fears also spoke to ASL artist and educator, Douglas Ridloff, about the process. He explains it:

“As a collective, we see various signs until one emerges as the agreed upon sign by a collaboration of the community. A few months ago, this became a very hot topic online, people were throwing out suggestions for different signs that could designate the concept of ‘Glide.’ We eventually narrowed it down to one sign that everyone in this online community agreed to use… In terms of Instagram, I still see quite a bit of variety regarding the sign usage, we haven’t seen a consensus yet. I think there are several reasons why. For instance, the CEO from Glide got involved and it was really key that he was a part of that collaboration in coming up with one definitive sign. When it comes to Instagram, a representative has yet to be involved in that process, so no consensus has been reached and thus it will take longer to come to a consensus. There isn’t an official canon or anything. It’s a small community.”

Ridloff asked one of his students, 12-year old Tully Stelzer, to help demonstrate how some of these new internet slang words are communicated using ASL. Together, they created a bunch of animated GIF’s. You can see the entire collection over on Hopes & Fears, but in the meantime, here’s a quick selection of a few of our photography favorites, just click the button in the center of each to start the animation…

Pretty cool, right? Be sure to read the original article, too. There’s a surprise twist in the end, where the sign for “Photobomb” which you saw in the above GIF was actually voted down by the Deaf community. Find out more, here.