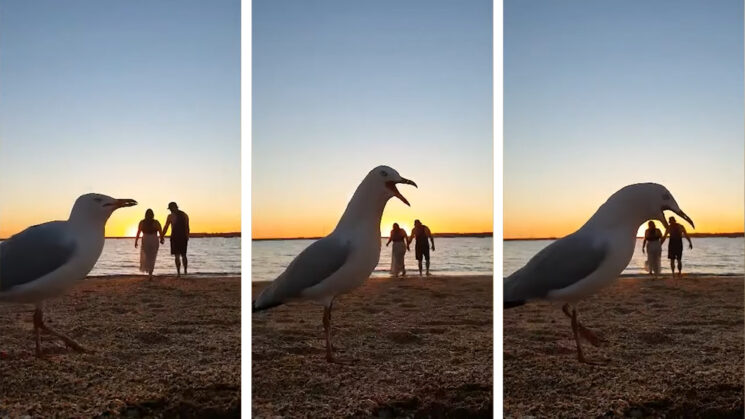 Have you ever tried to take a photo or video only to have someone photobomb you and ruin the moment? This happened to a couple in Australia, but rather than having their annoying friends ruin the shot, it was two seagulls. And instead of ruining it, they actually made it a lot better and completely hilarious.

Jace Spicer was watching the sunset with his girlfriend at Dampier Beach in Western Australia. It was a beautiful moment, and they decided to do what most 21st century couples would: film it with their phone. They set up the camera and went to the water, completely unaware of what was going on.

While they were taking the “spontaneous” video, two seagulls casually walked into the shot and completely took over. Thanks to forced perspective, at one point it looks as if the seagull is chomping Jace’s head, which I found particularly funny.

“We honestly had no clue we were getting photobombed by a seagull,” Jace told The Dodo. “Totally oblivious. We burst out into laughter rewatching the video, not believing our eyes [at] what actually happened. Every time we skipped back, we laughed even harder ’til we were out of breath.”

As you could have probably concluded, I’m not really a fan of cheesy, romantic photos and videos. But if animals photobomb them, I could actually like them. In fact, it looks like even Jace and his girlfriend liked it better than they would the original video they had in mind. “We definitely didn’t plan for a seagull to photobomb us,” Jace said, adding that they were lucky it was not a proposal video.

« The ZY Optics Lens Turbo 2 is a 0.72x speed booster for M42, EF and F mount lenses on Nikon Z bodies
How visualisation will help improve your photography »