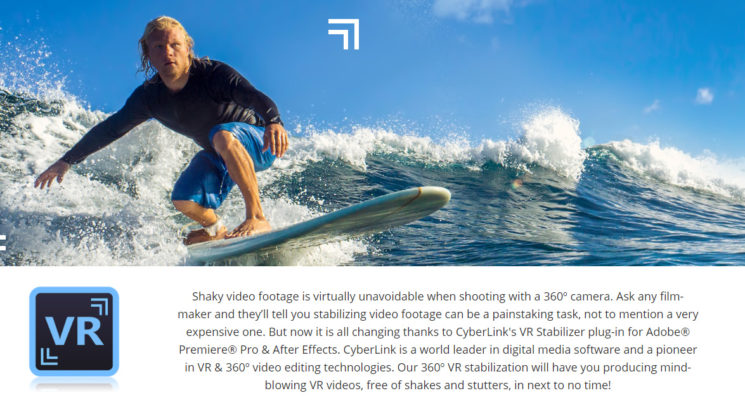 CyberLink seem to be going pretty hardcore on the 360° VR lately. After setting the VR binge-watching world record earlier in the year, they’re back with more VR news. This time, a VR stabilisation plugin for Adobe After Effects and Premiere Pro.

The imaginatively titled CyberLink VR Stabilizer works to clean up that shaky 360° video footage. Such shakiness is often inevitable when using 360° cameras handheld. But if you don’t want your shots to be boring, then handheld is the way to go. It also lets you adjust the pitch, roll and yaw of your camera, too. And you can even keyframe it.

I’ve been playing around with the plugin myself for the past few days with Premiere Pro. I grabbed some of the footage I shot for our YI 360 VR review, and ran it through. While it obviously doesn’t have much of an effect to tripod mounted shots, the handheld shots smoothed out very nicely. Even for the tripod based footage, though, being able to adjust the pitch, roll and yaw of the camera will allow you to cover up those mistakes when you didn’t level the camera perfectly.

Officially, it’s compatible with Adobe After Effects and Adobe Premiere Pro CC 2017 or newer. However, I’ve personally tested it with Premiere Pro CS6 and it all seems to function just fine (not so much with AE CS6, though). So, if you use an older version of either piece of kit, know that it might be compatible, but as they’re not officially supported, I wouldn’t expect any help for it.

The keyframe support for pitch, roll and yaw is especially welcome. It allows me to turn the camera around in post to point at other parts of the scene, or to readjust the horizon level if it goes out of whack during the clip. Very handy. 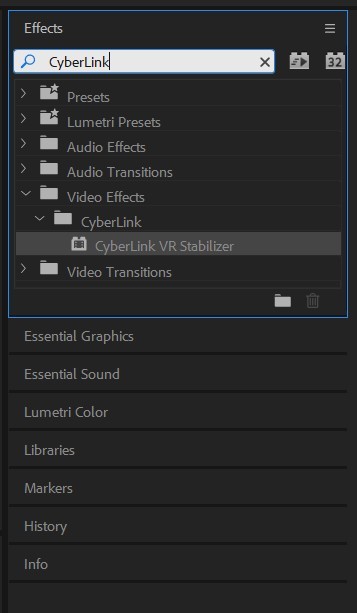 While some 360° cameras are now coming with built-in or app-based stabilisation, you often have to recompress the file to do it. Having a desktop plugin right in your editor means you can work with the original footage, apply the effect in realtime and retain maximum quality in your production.

There’s one feature I’d like to see in an update to this plugin at some point. I’d like to be able to adjust the pitch, yaw and roll but with the option of turning off stabilisation. This would be fantastic for those tripod shots where I don’t actually need stabilisation, but I didn’t quite put it down level.

I can do this now with stabilisation turned on, it just probably works a little slower than is necessary due to wasting resources to stabilise static footage. It would also be quite useful for flipping footage from 360° cameras mounted upside down beneath drones, too.

Other than that, though, it seems fantastic in my tests so far. I can see myself shooting a lot more handheld 360° footage now.

The CyberLink VR Stabilizer plugin for After Effects and Premiere Pro is available now for $199.99 in the USA or £169.99 in the UK. You can purchase it through the CyberLink online store or Adobe Exchange.