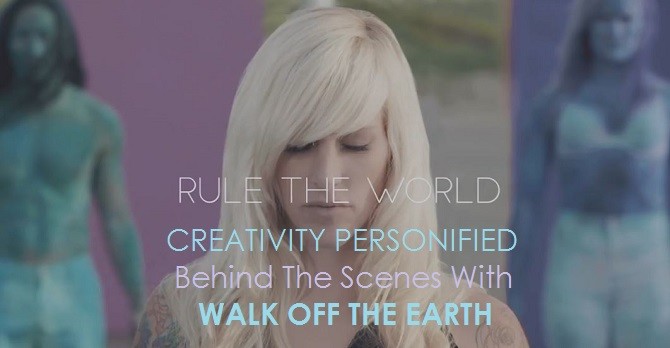 When you depend on creativity for your livelihood – you can’t help but be inspired by other artists.

One of my favorite bands is Walk Off The Earth.

These guys leveraged the exposure from one viral video into a full blown career as rock stars – which is pretty amazing – but they are also phenomenal artists in every sense of the word.

Walk Off The Earth – Rule the World – Behind the Scenes

Besides being incredibly talented multi-instrument musicians, when you listen to the band members talk about the creative process that went into the video, you really get the feeling that it was their drive to push envelopes that really launched their career.

“We like challenges as a band when we make videos, we basically look for the craziest one that makes the least amount of sense, that doesn’t even seem possible.”

When you consider that the band built their success in the digital world without a record label, booking agent, or management, there is a lot here for photographers and other creative professionals to learn about what it takes to be successful in 2015.

Describing the theme of the song, Joel Cassady sums it up as:

“There’s a lot of folks who don’t, for whatever reason, don’t ever actually go after whatever their dream is or what their big goal is, so it’s like – you only got one life to live – go after it!

When you have that kind of drive, success just seems inevitable.

And the best part is that as the band gains success they just keep reinvesting that success (and the monetary rewards that come with it) into ever more ambitious and complex creative projects.

Watch the video and I dare you not to be inspired to go out and apply your creativity!

And here’s the finished video:

What is the biggest barrier to success in the creative industry?

Lack of talent?  Lack of contacts? Or just plane old lack of ambition?