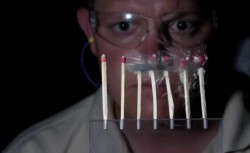 Catching a bullet in mid air is pretty impressive. There are some high end techniques you can use to make that possible starting from the relatively cheaper photogate kits, all the way up to air gap strobes. But I don’t think I have ever seen a movie made from cutting together a sequence of high speed butter shots.

(and if that was not enough for you, check the matches trick at 2:54). Movie after the jump.

« YASBT – Yet Another Shaped Bokeh Tutorial
Dancer – A Shoot Anatomy »