As more evidence and guidance is released about how the coronavirus and other viruses may spread from one person to another, scientists in Japan have released a video which uses high speed, high sensitivity cameras and laser beams to detect microdroplets measuring as small as 100 nanometres (1/10,000th of a millimetre) expelled from humans during the acts of sneezing or simply sitting to have a conversation.

The video was produced by Japan’s NHK broadcasting organisation in collaboration with the Japanese Association for Infectious Diseases. It shows footage from the high sensitivity camera, in which droplets in the air show up as white dots. Larger ones fall to the ground more quickly, but the smaller and lighter microdroplets linger around in the air, being carried around by its currents. 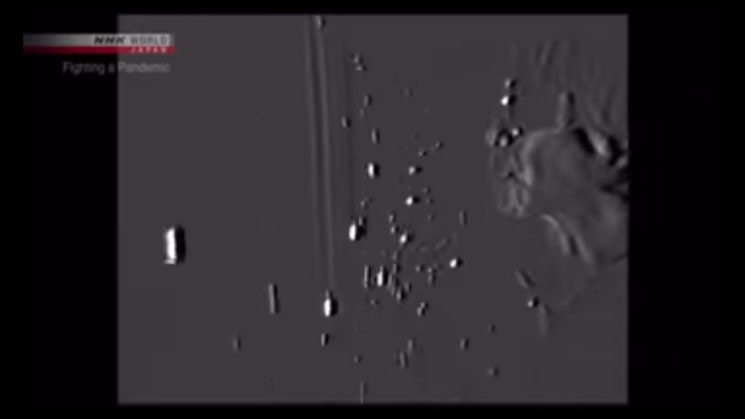 There’s still no solid evidence that the COVID-19 coronavirus can be spread this way, and this is stressed in the video. There’s also no indication yet as to how much of the virus you’d need to be exposed to in order to become infected. But, there’s no evidence that the coronavirus can’t be spread by a sneeze, either. It is how many other viruses are known to spread, however, so it’s a logical assumption to make and impresses the need for social distancing.

Dylan Morris, co-author of a study on the aerosol and surface stability of SARS-CoV-2 (COVID-19) published in the New England Journal of Medicine last month said…

We still dont’ know how high a concentration of viable SARS-CoV-2 is needed in practice to infect a human being, though this is something we are looking to model in the future.

In indoor settings, the video suggests that the best potential solution for removing microdroplets from the air is to simply open a window. Even a slight breeze will allow them to quickly pass out of the room rather than leaving them to linger in the air and settle on surfaces.

Whether or not COVID-19 can be spread this way, it’s a fascinating look at exactly what does happen to what comes out when we sneeze, and also just in general conversation. Stay safe, folks!

Turn On the High Beams: Add head lights to a vehicle in Photoshop