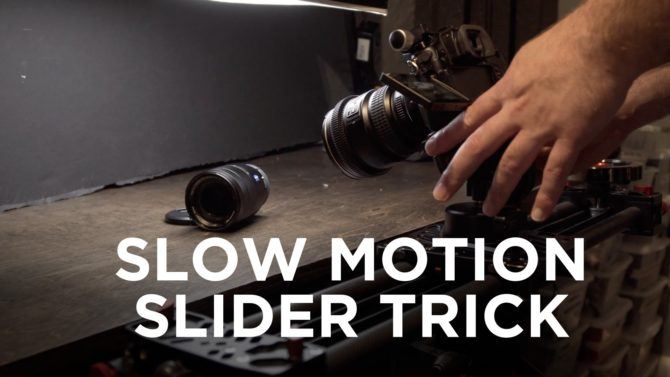 At some point or another, most of us that shoot video have to create a clip sliding past, or moving around some kind of static object. Perhaps something small, like a pair of rings for wedding shooters, or it could be something as large as a car.

In this video from DSLR Video Shooter, Caleb Pike walks us through the process with techniques and tips to get a smoother final video using some slow motion tricks.

The first thing you’ll want to do is figure out your start position, end position, and where you want to slow things down to focus on a specific detail in the middle. Next, the trick is simply shooting your footage at a high frame rate and then playing it back slower, smoothing out any bumps in the motion.

What frame rate you should shoot depends on the frame rate of your project, and how much you want to slow the movement down.

In the video, Caleb is using Final Cut Pro, but the same technique can be applied in both Adobe Premiere Pro and Adobe After Effects, by interpreting the footage as 24fps or 30fps (whichever your project is), and then using time remapping to speed up and slow down the different parts as needed.

The great thing about this technique is that you can scale it up as large as you need with pretty much any camera you want, even a cellphone (although I’d suggest grabbing FiLMiC Pro or something to get focus lock).

If your slider’s too small then you can either step up to a bigger slider, go handheld with a gyro stabiliser or even use a steadicam for extremely large subjects.

Is this a technique you use in your work? What other tips and suggestions can you offer? Let us know in the comments.

This is the world’s fastest slider doing slow motion