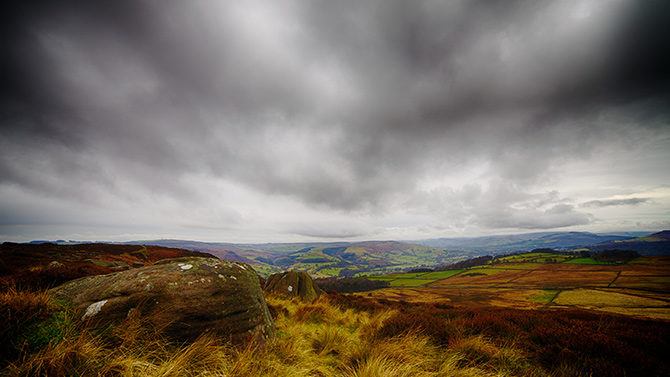 Reaching into five counties, and seeing more than 10 million visitors each year, the Peak District offers some of the most amazing views of the English countryside.  So, with around 27,000 people a day visiting the area it’s no surprise that some will occasionally become lost.

After wandering from the footpath to explore areas less trodden, the couple who are believed to be in their early 20s, climbed a steep bank near the top of Winnats Pass in Derbyshire.

Realising they were lost and stuck on a ledge, the couple contacted the emergency services, and sent over a selfie they’d taken earlier in the day.  The emergency services recognised their location based off the image they received, and send a team in to help them.

You have to love modern technology, and thanks to another piece of modern technology, this drone footage shows you the area in which the couple became stranded (skip ahead to about 5 minutes in).  While not quite in the middle of nowhere, it can certainly feel that way to those visiting the area.

Edale Mountain Rescue believe this to be their first ever “Selfie Rescue”, although I can imagine it won’t be their last.

One thing I wonder about, however, is that if they were able to call the emergency services, they obviously had a signal.  So, why not simply load up Google maps and send over a screenshot?

It sure would’ve been a lot more reliable than hoping somebody might recognise the background in a photo they’d taken earlier in the day (couldn’t they take a current one?).

They had described the location very well, and then one said: ‘I’ve got an idea, I’ll send you a picture as well’, saying they were in a shadow cave in the background of the picture

So, remember folks, if you’re planning to go off into the middle of nowhere for the day, make sure to plan your route, let somebody know what that route is, and try to stay on the path if you have a habit of getting lost or stuck.

Stories like these often conflict me.  On the one hand, I’m glad they’re safe.  On the other, they got into this mess all by themselves.  It’s not like it was an accident that couldn’t have been prevented by using a little common sense.  So, why should everybody else have to foot the bill for their “rescue”?

They’re fortunate that they decided to get lost in the Peak District that day, and not the Lake District, or they may have been stranded for much longer.  Almost every part of it looks like every other part of it, and most areas doesn’t get any kind of signal anyway.

What do you think?  Let us know in the comments below.

« Here is how to composite around the world, get free LUT sets and win a 30% discount
Lens falls on ice during Hockey NHL Stanley Cup Finals, players think it’s a puck and hit it away. Ouch! »