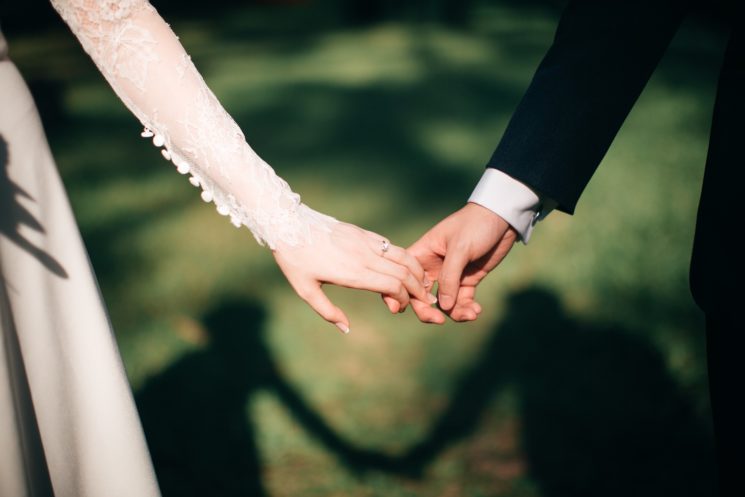 Like most couples, Matthew and Jazmine Gallegos from Albuquerque hired a wedding photographer to preserve the memories of their big day. However, the couple claims that they were left without their photos, as the photographer disappeared from the internet and blocked them on social media. They are now speaking up to warn others of their bad experience.

Matthew and Jazmine searched for a photographer and the search led them to Liz Marie Hunter of Infinite Pixel Photography based in San Antonio, Texas. They hired her to shoot their engagement photos, which she delivered to them. She then photographed their wedding day on 17 September 2016. However, they claim that the photos from the wedding never came, and the receipts show that the couple had already paid the photographer $1,500.

A few months after the wedding, the Infinite Pixel Photography website wasn’t online any longer (and it’s still impossible to access). Social media pages of the business are now private, too. The couple told KRQE News 13 that Hunter stopped responding to their messages at one point, and blocked them on social media. Even her business’ phone number now belongs to another owner who reportedly receives calls from debt collectors and clients.

Jazmine remembered hearing from another couple who also hired Hunter to photograph their wedding day. Reportedly, they also didn’t have a pleasant experience with her. KRQE News 13 reports that she first canceled their engagement photo shoot twice, and they had already paid $650. They asked to pay the rest on the wedding day, so they can make sure Hunter would appear. But, she reportedly said that “without paying in full beforehand, the contract is null and void” and that she is wasn’t obliged to cover their wedding. The Texas couple claims she kept the $650 and didn’t show up.

To add to these stories, there’s another complaint about Infinite Pixel Photography on Better Business Bureau’s website. According to this complaint, Hunter didn’t show up at another wedding without prior notice. She said it was “due to an unforeseen circumstance” and refused to issue a refund. 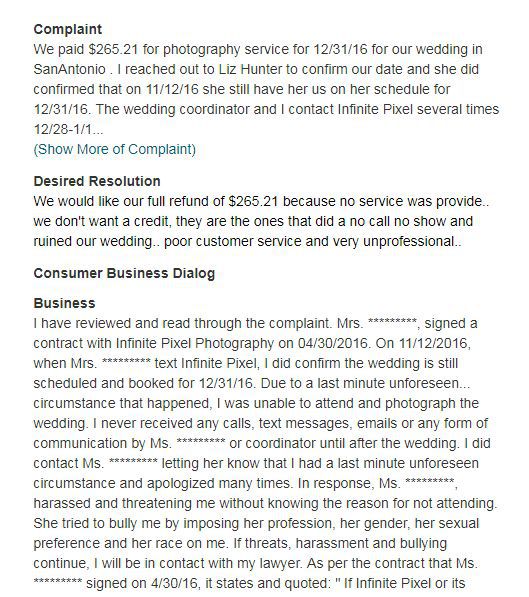 As KRQE News 13 writes, Matthew and Jazmine Gallegos filed a complaint against Hunter with the Better Business Bureau. After nearly a year, she responded, claiming that she had already mailed the photos in January 2017. However, the message she sent to the couple in February same year shows that she asked for their address again so she could send the images. She reportedly told the Better Business Bureau that she would send the photos “if she still had them.” In the meantime, the couple collected the photos from their guests’ cellphones.

This is one of those “horror stories” that unfortunately happen with wedding photographers every now and then. Matthew and Jazmine Gallegos hope that their story will serve as a warning to everyone else in search of a wedding photographer. In my opinion, couples should do a thorough research before hiring someone to cover their big day. Talk to other people, hear their experiences, read reviews… After all, you don’t get married every day, and I’m sure you want your memories to be preserved.

This couple lost all their wedding photos after photographer got robbed

« Is Flickr Still A Relevant Social Media Outlet? Yes – and You Should Use It!
BBC now lets you download more than 16,000 free sound effect samples from its archive »