The following article about how to build a homemade reflector stand was contributed by Brian Zimmerman. You will want to use a reflector if you only have one light source, or in other cases where you want to eliminate shadows from a dark place and don’t have a flash to place there. The trick is how to place this reflector in the most effective way.

This reflector panel holder made of 3/4″ PVC pipe is handy if you have a spare tripod to use. The tripod provides a stable base that can be adjust for height and tilt angle. Reflector is the collapseable type used for an auto windshield (31 x 38″). It may also be possible to build a stand from PVC. 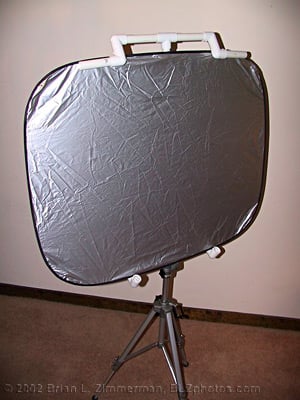 Some joints are left unglued for disassembly or adjustment. 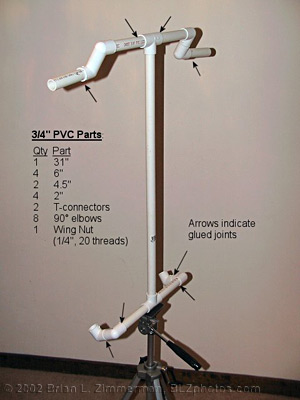 A 1/4″ diameter hole is drilled into the center of the T-connector piece to insert the tripod screw, and secured tightly with a wing nut (for easier fastening). Filing the T connector flat on the bottom not only helps make it more stable, but also may be necessary to get the tripod screw all the way through the thickness of the plastic. Some shorter tripod screws may not work. A sturdy metal base is recommended on the tripod, because the leverage forces could break a plastic tripod, although it might work if you are gentle and don’t tilt it too much.
Here’s another idea for an alternative way for attaching my PVC holder to an old tripod, which could work if the head is broken or it does not have a strong metal head… Remove the tripod head assembly so only the top vertical pole remains on the tripod, then use a size of PVC that slips over the top pole and fasten by drilling two holes a few inches apart through both PVC pipe and tripod pole, and secure with nuts and bolts. Attach my reflector holder to that PVC pipe, using an extra T-connector, plus a size-reducing bushing if necessary to accomodate a different diameter of PVC pipe. The only disadvantage with this is you loose the tilting action in the head, but you could still adjust for height, plus adjust the legs for a small amount of tilt if needed (usually close to vertical will work for most portraits anyway).
Another idea for holding the reflector panel might be to slit an approximately 1-ft length of PVC pipe lengthwise (or slit twice to remove a 1/4″ strip for a wider opening), then use two of these as crosspieces and bolt them to a vertical PVC pipe which could slip over any vertical pole. The thinner PVC (schedule 25?, not schedule 40) might work better for the crosspieces and be easier to cut. Attach the top piece with the slit pointing down and the bottom piece with the slit pointing up, then slide the reflector panel inside the slits. A longer vertical pipe with extra hole(s) near the top could be used for a different size reflector(s). 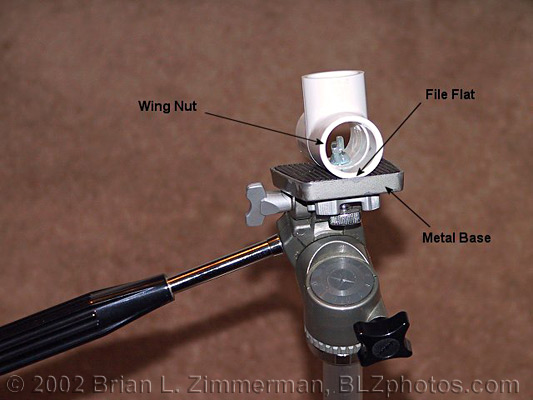 Silver reflector is from a set of two collapseable reflector sunshade panels made for a car windshields ($10 at the Target store), Axius brand super jumbo size (two panels each 31 x 38″) “magic shade” that has a nice silver reflective surface on one side and black on the other, with a wire frame so it collapses to about 1 ft diameter. Yardstick included for size reference. 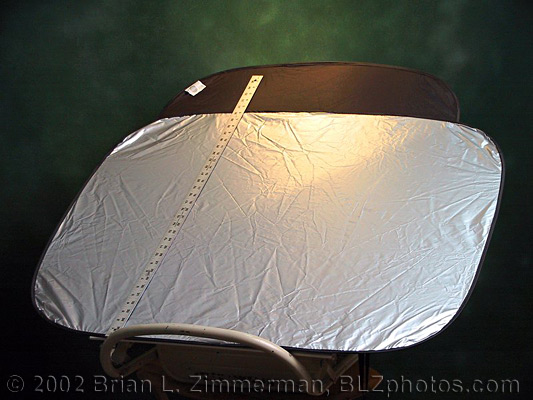 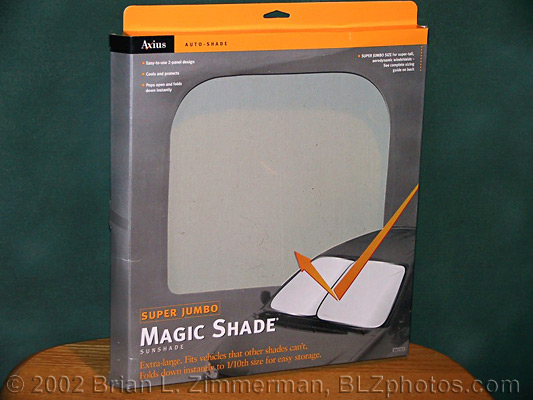 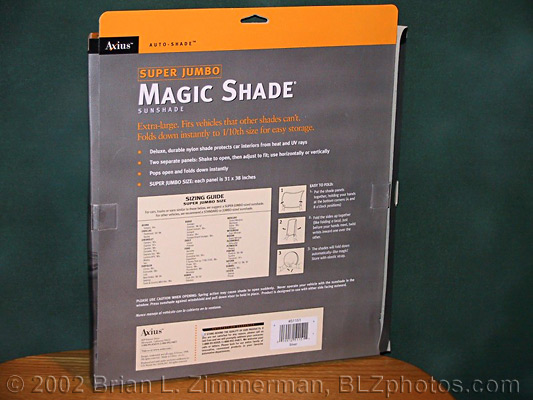 Reflector panel mounted in the Horizontal position, and demonstrating how the panel is held in place even when titlted. 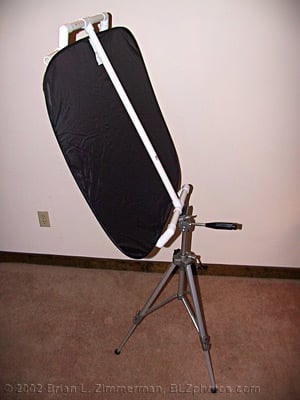 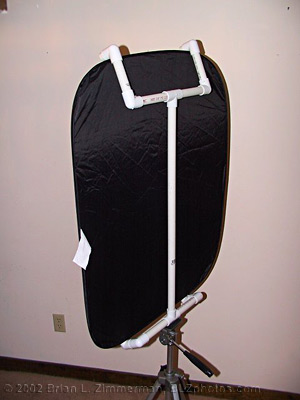 This shows how the frame is adjustable for height to accomodate vertical or horizon position of the 31 x 38″ panel. The 4.5″ tube with elbow is removed at the top and reversed and swiveled down, to change from the vertical position (left) to the horizontal position (right). Note that this panel is close in size to a standard 32 x 40 x 3/16″ sheet of foam core, which could also be used for a white reflector panel. Alternatively, sew white fabric to the backside of one of the panels. 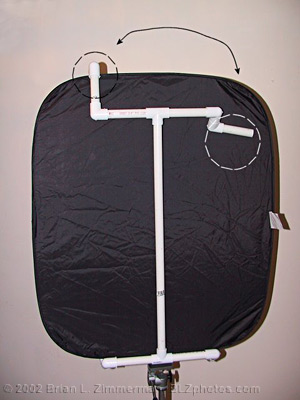 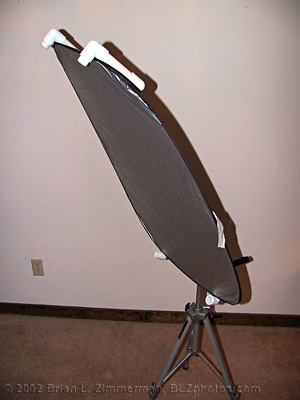 Here’s another handy item for the photographer that I found in the camping section at Walmart. This emergency blanket (approx 4 x 7′, $1.94) is shiny like aluminum foil, but is made of aluminum-polyethylene laminate, so it’s very strong and flexible – perfect for making your own reflector(s) (attach to foam core board for a combination of white on one side and silver on the other, or attach to an auto reflector like that shown in the other photos here). As shown in lower right, it can be crumpled up to give a less mirror-like surface for a bit more diffuse lighting. 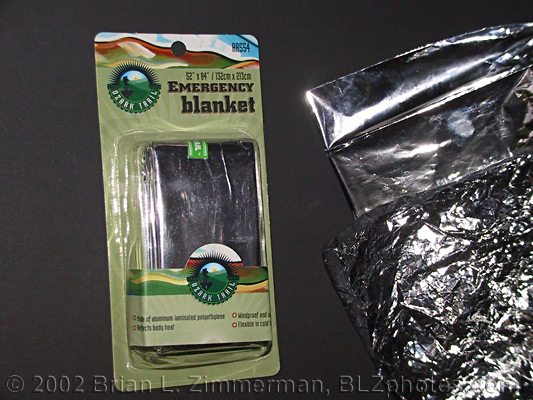