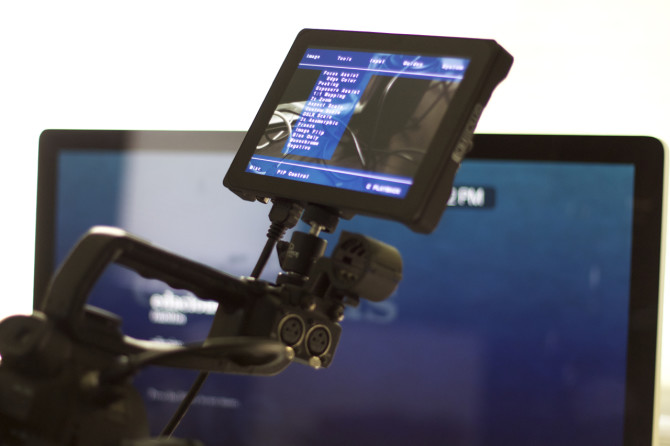 Not to any particular religion, but instead to the idea that a field monitor is the most important piece of equipment you can have on a video shoot after the camera, a lens and some kind of support.

This represents a sea change in my worldview. As a still photographer for decades, until recently I thought the bane of my video production existence was audio. But a Zoom H4n, a shotgun, a couple of lavs and a wireless system later, I’ve changed my mind.

And that’s because while I took for granted my ability to obtain tack-sharp focus every time, I’ve learned the hard way once again that assumptions are the mother of all screw-ups.

Turns out it was easier to focus in the good old days of film, manual lenses, split image rangefinders, and coarse microprisms on ground glass than it is today through on-board electronic viewfinders (EVFs) and LCDs.

There’s a reason why third party EVF’s and monitors are so popular.

I recently had the opportunity to review a 7.7” diagonal field monitor, and it was a revelation (no religious undercurrent intended).

1) You can actually see what you’re filming 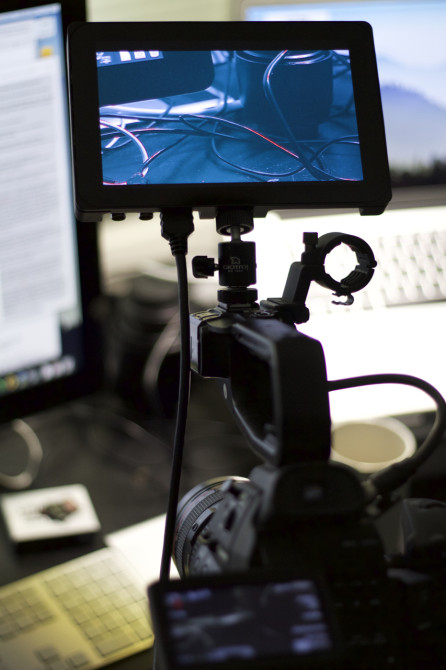 Unless you’ve already got an articulable electronic viewfinder (in the DSLR world, something like the Zacuto EVF with Z-Finder Pro), you won’t be able to see what you’re shooting from low or high angles in bright daylight. Yes, a bunch of DSLRs and mirrorless cameras have articulated LCD’s, but just try using them when it’s really bright outside – without blackout cloth draped over your head.

Back in the old days we had waist level finders and before that right angle finders.

Now? Not so much.

With a big, bright field monitor (I’m talking at least 7” diagonal), you’ve got the best possible chance of actually seeing what the camera sees across all scenarios, light and dark. Even without a sunshade, monitors with brightness levels of 400 nits let you see pretty much everything.

There is something to be said for allowing some distance and perspective to help you evaluate your shots.

And don’t underestimate the value of comfortable viewing angles – when you’re on your belly looking trying to look into the viewfinder, you’re probably more interested in standing back up and dusting yourself off than really studying the image – if you can even see all four corners of it. It’s when you have the time and inclination to truly look at what you’re capturing that you’ll find a slightly better angle on your framing – and it’s usually worth it.

2) You can achieve critical focus 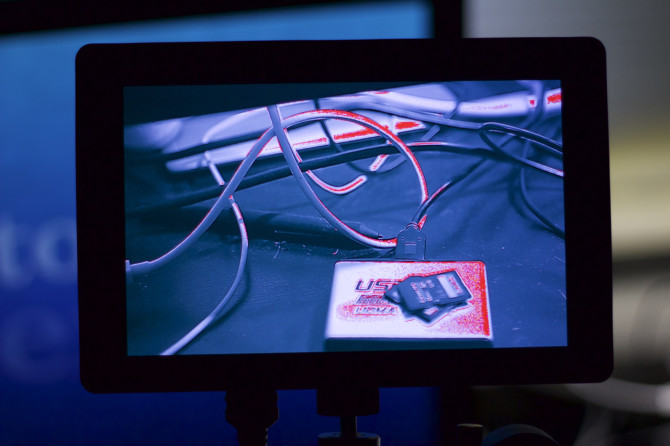 Yes, we have autofocus. And I like the fact that a camera like the Panasonic GH4 has focus peaking. But there’s a world of difference between autofocus and beautiful, slow focus pulling; and between focus peaking in-camera through a small viewfinder or small LCD and the (usually) fuller implementation of focus assist on a bright, big and sharp monitor. With some monitors, you can even select which color you want to use for peaking – and have the option of heightening the contrast further by allowing you to switch to a monochrome view of everything but the in-focus edges.

But what’s at least as important is recognizing that in low contrast situations, focus aids often don’t work – and then you’re left with eyeballing it. Good thing, then, to have that big bright monitor AND magnification built in.

3) You don’t have to eyeball exposure 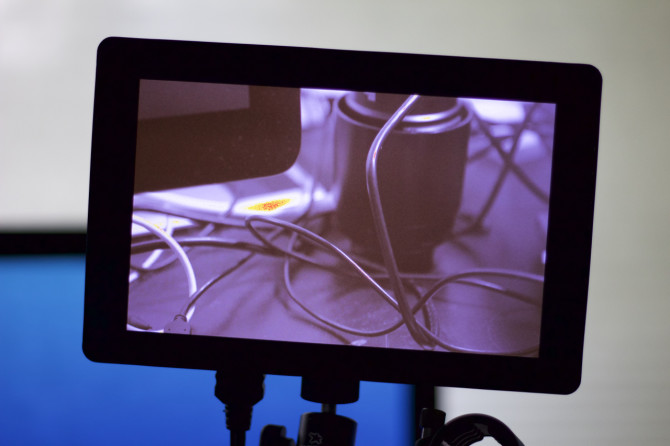 It’s not a great idea to rely solely on what you see on the flip out LCD of your DSLR or camcorder for exposure — much better to use an exposure aid such as zebras, waveforms, or false color.

But not all exposure aids are created equal, and I prefer false color to tell me when I’m blowing out my highlights and crushing my blacks. This is another area where prosumer video gear typically falls short, often omitting exposure aids altogether or only going as far as zebras.

A good field monitor will give you not only a two-color false color reading (blown highlights typically show up yellow or red; crushed blacks typically show up as blue), but provide the option for a finer-grained evaluation including mid-tones (e.g., skin, for which an IRE of 50 or so is usually the ticket and – at least in the monitor I reviewed recently — colored orange).

It wasn’t that long ago that I feared false color, but no more. I truly get it now – and I recommend it.

Not all cameras play nicely with monitors. Best are those that output in full HD and automatically (and properly) scale, and can send clean HDMI (nothing but the image) – not all do. In fact, on the monitor I tested recently, there were built-in Nikon and Canon DSLR presets – but at least in the case of the Canon Rebel SL1, it didn’t scale properly.

Not only that – focus peaking gets funky as soon as you send display information to a monitor, whether it’s from an SL1 or C100. The monitor will highlight the on screen information as if it is in focus (well, it is…). I’ve seen the exact behavior from the Zacuto EVF, so I chalk that up to “dirty” HDMI. A good monitor makes it easy to switch focus and exposure aids on and off (wouldn’t it be nice if cameras could switch clean HDMI on and off as well, without having to drop down into menus…).

LCDs which complement viewfinders are good; 5” external monitors all else being equal are better; but the really big shift comes when you move up to 7+” We didn’t cover this earlier, but this is especially true when the monitor is more than a few inches away, as is the case when operating something like a 3-axis gimbal or jib.

The key is making sure your camera can output appropriately.

For those cameras that send the right signal out (typically through HDMI in the prosumer space, SDI for the work-a-day pro gear), there is any number of excellent monitors out there at various price points. Seek, and ye shall find.

Hugh Brownstone is a corporate escapee and founder of Three Blind Men and an Elephant, a small video production house with a big animal logo. He’s a regular contributor over at planet5D and works with the team at Resolution Rentals to test and evaluate gear.

The best 5″ camera monitors between $179-499
« How To Build A DIY Eyelighter
$99 Light Blaster™ Goes Against the $3,552 Broncolor Optical Spot For Jewels Photography »