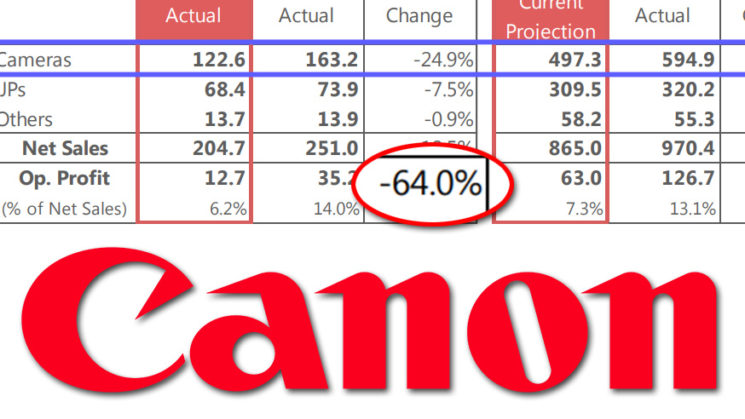 Canon did everything they could to fight the mirrorless advance before finally capitulating with the launch of the EOS R. It seems, though, that it might be a case of too little, too late. According to Canon’s Q2 2019 financial results, their Imaging System department has plummeted 64% compared to this time last year.

While the decline of camera sales is trending across all brands, this is a time when Canon is probably going to be hurting more than most. Canon did predict a big loss, although they remain outwardly optimistic about their future in the mirrorless market,

Canon says that they expect demand for full-frame interchangeable-lens cameras to grow, but the overall market is still expected to shrink. They lay the blame on the loss at entry-level DSLRs. Yes, now that compact cameras (point & shoots) are all but gone, Canon is blaming a loss of sales in the next tier up, as smartphones continue to improve and become good enough for more average consumers.

They do expect growth in the mirrorless market, however, stating that “in the area of mirrorless cameras, where we are focusing our energy, the effects of expanding our lineup will continue to lead to sales growth”.

This suggests that Canon definitely has at least one or two cameras on the way, and possibly quite soon, too. At least, it’d better be soon, or it’ll be too little, too late, all over again. Many professional shooters aren’t considering the EOS R or EOS RP given the lack of dual card slots and what they can get from somebody like Sony for the same or less money.

So Canon definitely needs to step up. Their current mirrorless offerings aren’t good enough for many pros but aren’t cheap enough for many enthusiasts. But it’s always the competition’s fault. Or smartphones. At least, according to Canon.

« Photographers, beware: this is how you can get scammed
It looks like RED will be the first to announce an RF mount video camera with the RED Komodo »