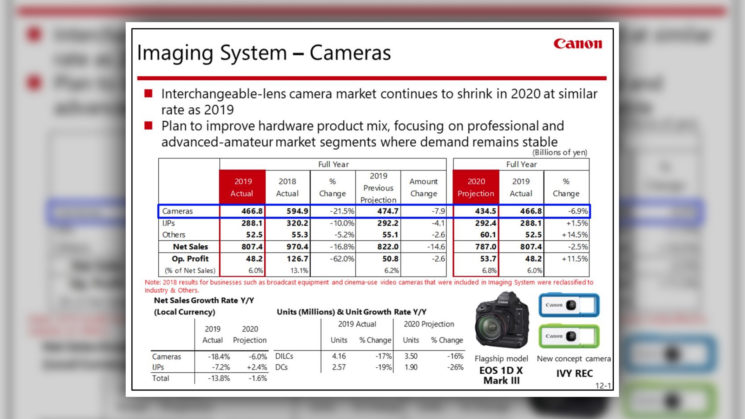 Canon has released its 2019 end of year financial results and presentation, in which Canon highlight how they’ve done over the last year, and also talks a little about what we can expect in the future. If you want to see the financial side of things you can click the links above, but what was particularly interesting, is Canon’s quite surprising focus on new specific new EOS R bodies and RF lenses.

Canon doesn’t specifically come out and name the recently EOS R5, EOS R6, or the “EOS Rs“, but they do talk about a new camera, with a newly developed sensor and image-processing engine, which is a lot more specific than companies tend to get. Usually it’s just a vague “We want x% market share of mirrorless systems by whatever date”.

Although we have launched two full-frame mirrorless cameras as well as ten dedicated lenses, our lineup is still insufficient. In order to recover from our late entry into the mirrorless camera market, we have plans to launch a model that incorporates a newly developed image sensor and image-processing engine that offer even more advanced features. We will work to raise our presence in the mirrorless camera category, leveraging large trade exhibitions around the world.

It does only mention that they plan to launch “a” model, not several models. Of course, this could just be referring to the immediate quarter, rather than the year as a whole. At least, one would certainly hope so. It’s going to be quite disappointing if they only release one new camera in 2020 because as not-terrible as the EOS R and EOS RP are, they are lacking a lot of features that have actively prevented people from making the switch (1 card slot, cropped 4K video, etc).

Whatever is coming, Canon does seem to be taking things a little more seriously now, with a somewhat realistic perspective. As Canon News notes, the EF to RF transition for users hasn’t happened as quickly as Canon would like. Mostly because the only bodies they offer are quite lacking in key areas for a lot of people and the EF gear they already own works well. So, they’ve just stuck with it. But they’re not only looking at new cameras, but lenses, too.

At the same time, we will expand our lineup of dedicated lenses launching several innovative ones that take advantage of the new mount that allows greater flexibility when designing lenses. We will accelerate sales by responding to user need to capture various images, expanding options by combining camera bodies and lenses.

It’s not surprising that they’re focusing on RF lenses, though, given Canon recently announced that they’re ditching EF lens development. “Several” can mean anything, though, really. Basically “more than a couple, but less than a lot”, so there’s no telling just yet exactly how many that might be. And, of course, Canon made the expected generic statement, too.

Even amid increasing competition, we will expand sales of higher-end models driven by new products and aim for top market share even in the mirrorless camera market.

Exactly what those higher-end models will be, we’ll have to wait and see. But if the EOS R5, EOS R6 and EOS Rs rumours turn out to be even close, then it looks like we might see some nice challenge and innovation in the mirrorless market.

To read the full report, see here or here to download the presentation.