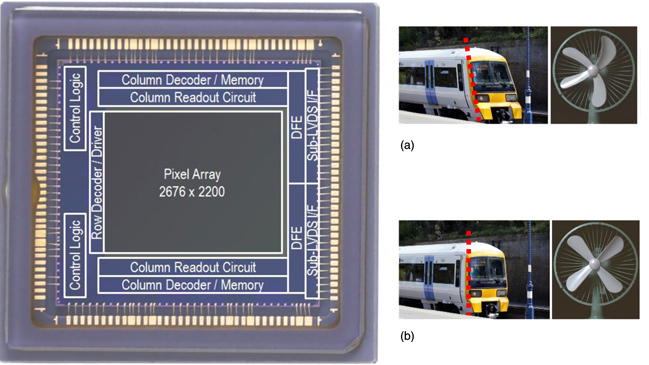 Published in the Japan Journal of Applied Physics, Canons is working on a new global shutter CMOS sensor with dual in-pixel charge domain memory. The rather technical paper explains the research and development of the new sensor technology.

This new technology would allow camera manufacturers (or, at least Canon) to remove the final major mechanical component from camera bodies. With a global electronic shutter, there is no need for a physical mechanical shutter anymore.

temporal noise, and −83 dB parasitic light sensitivity. In particular, we describe the sensor structure for improving the sensitivity and detail of the readout procedure. Furthermore, this image sensor realizes various readout with dual CDMEMs. For example, an alternate multiple-accumulation high dynamic range readout procedure achieves 60 fps operation and over 110 dB dynamic range in one-frame operation and is suitable in particular for moving object capturing. This front-side-illuminated CIS is fabricated in a 130 nm 1P4M with light shield CMOS process.

A traditional CMOS sensor records a scene one line of pixels at a time, typically from top to bottom. If there is any movement during this exposure, then the sensor will record capture this causing the weird kind of “jello effect” we often see when shooting video. But it can also apply to stills, as well. Just try shooting your phone out the side car window while (somebody else is) driving down the highway. All the lamp posts, trees, and whatever else is on the side of the road will appear to lean to one side.

The issues of a rolling shutter

Global shutters, on the other hand, record every pixel of image data in the image simultaneously. The entire image is recorded at the same moment in time. This is how CCD sensors work and why many early DSLRs utilised them.

Global shutter CMOS sensors have been available for a few years now, but the big issue is that they typically lack dynamic range compared to their rolling shutter equivalents. This is because each pixel has to have dedicated memory, which is limited in the amount of data it can store.

This new solution, if I understand it correctly (and it’s entirely possible I don’t), essentially takes two readings from each pixel, storing them in the dual memory. These two values for each pixel then form an HDR image straight from the sensor to help overcome those dynamic range limitations. Using this approach with dual memory, Canon appears to have eliminated the ghosting issues typically caused by creating HDRs of fast moving objects with two exposures.

If you want to find out more, head on over and read the research paper for yourself. It’s very interesting, but I think I need to tackle it in the morning with a fresh head.