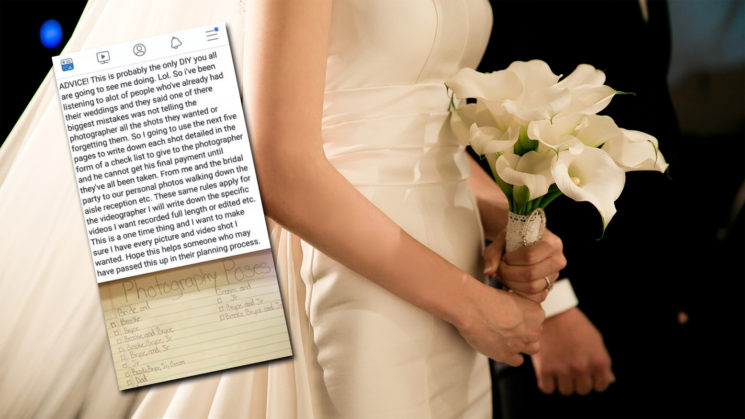 One bride in particular, though, has taken crazy to a whole new level. She’s created a five-page checklist of photos she wants the photographer to get, and is refusing to pay them unless they show her every single last one of them having been captured. She also posted her checklist to Facebook for those who might want some tips for booking their own wedding photographer. 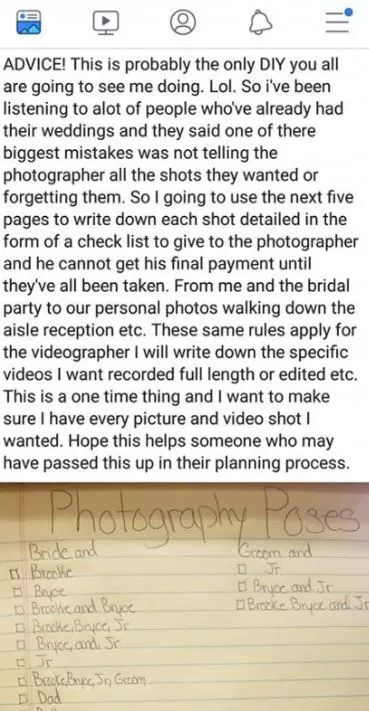 I’ve actually seen posts like these a few times over the past couple of months now. There must be some new misinformed article going around in a wedding magazine again. But, it’s ok, Facebook was quick to point out that that isn’t quite how things work for wedding photographers. 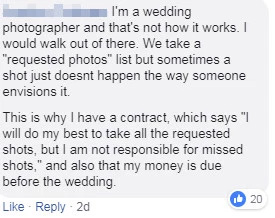 Naturally, somebody who’s never had a wedding of their own before, and never dealt with organising one before might not understand how things typically work when it comes to wedding photography. And common sense also isn’t quite as common as it once was. But it is a firm reminder to wedding photographers to make sure you have a solid contract in place. Because if a bride presents you with a list like this and you don’t have your backside covered, you might find yourself in small claims court being ordered to provide a full refund. You might also want to make sure that you’re paid in advance, too.

Demands like this certainly aren’t common and don’t represent the majority of wedding clients. I know many wedding photographers who have nothing but wonderful things to say about most of the people who approach them to photograph their wedding. But I just don’t have the patience to deal with ones like this when they inevitably approach. Plus, I can’t stand weddings. Even if they do have an open bar. And there are usually children there, and I like them even less than I like weddings.