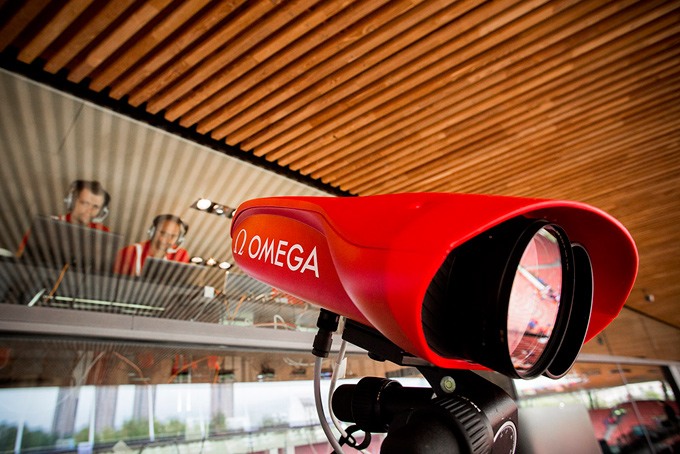 Since 1932, vaunted Swiss watchmaker Omega has served as Official Timekeeper at the Olympic Games 26 times. This year at the Rio Olympics, Omega is once again providing finish line cameras to provide officials and the public with the most precise view of the athletes.

In a 100m dash, a false start could be the difference between gold and silver. In the past, a human might evaluate whether an athlete “jumped the gun,” but Omega has built sensors into the starting blocks to measure the force against the footrest 4,000 times per second. 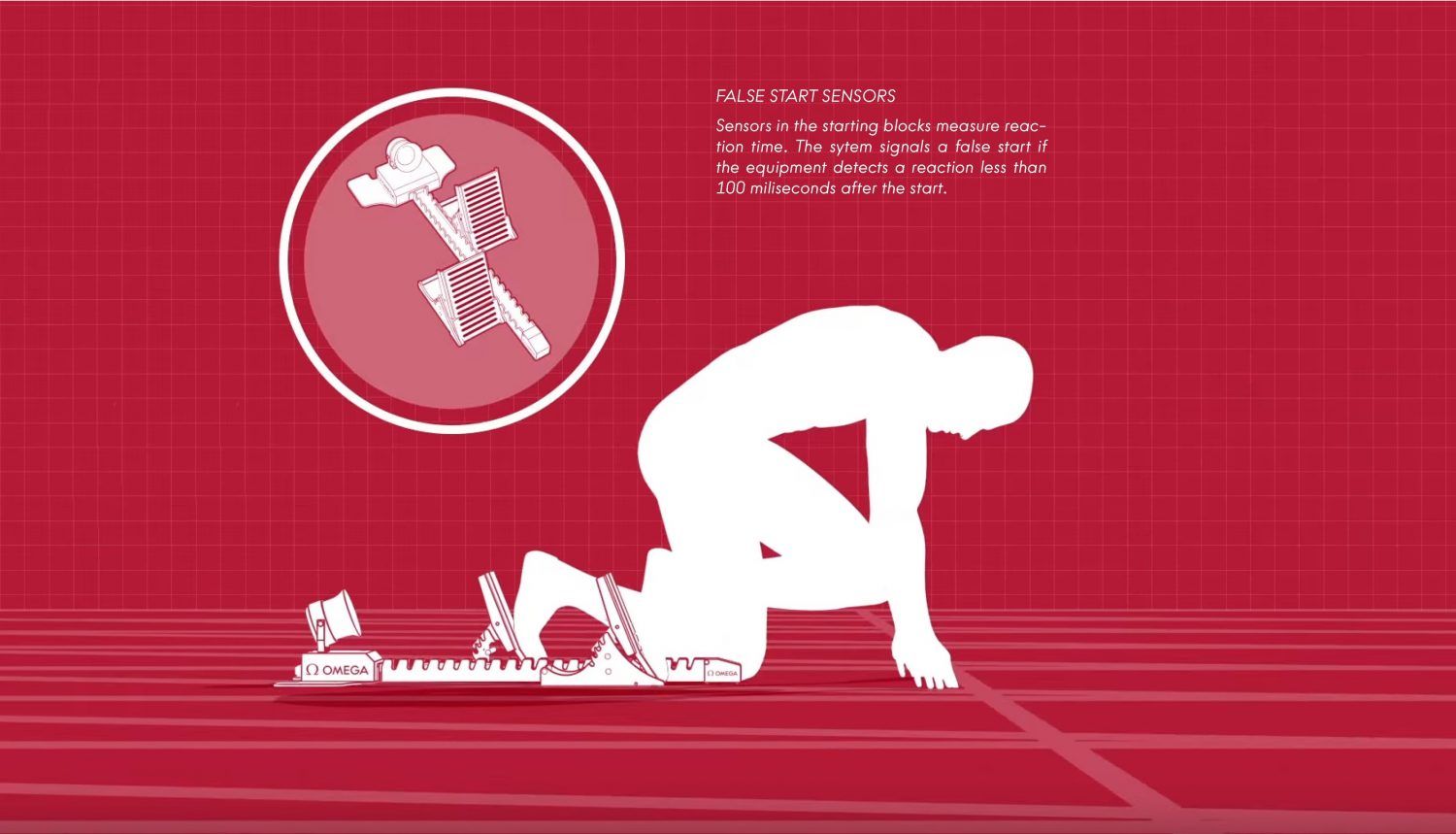 In the past, an actual pistol was used to start races. But the speed of sound is slow enough to give an unfair advantage to the athlete closest to the gun. The starting pistol has evolved into a piece of futuristically-styled electronics. When the starter fires the “pistol,” three things happen simultaneously: 1) a visible strobe is fired on the top of the unit, 2) a start pulse starts the timing device, and 3) an audible start sound is triggered to play on a speaker at the back of each starting block ensuring that each athlete hears the start simultaneously. 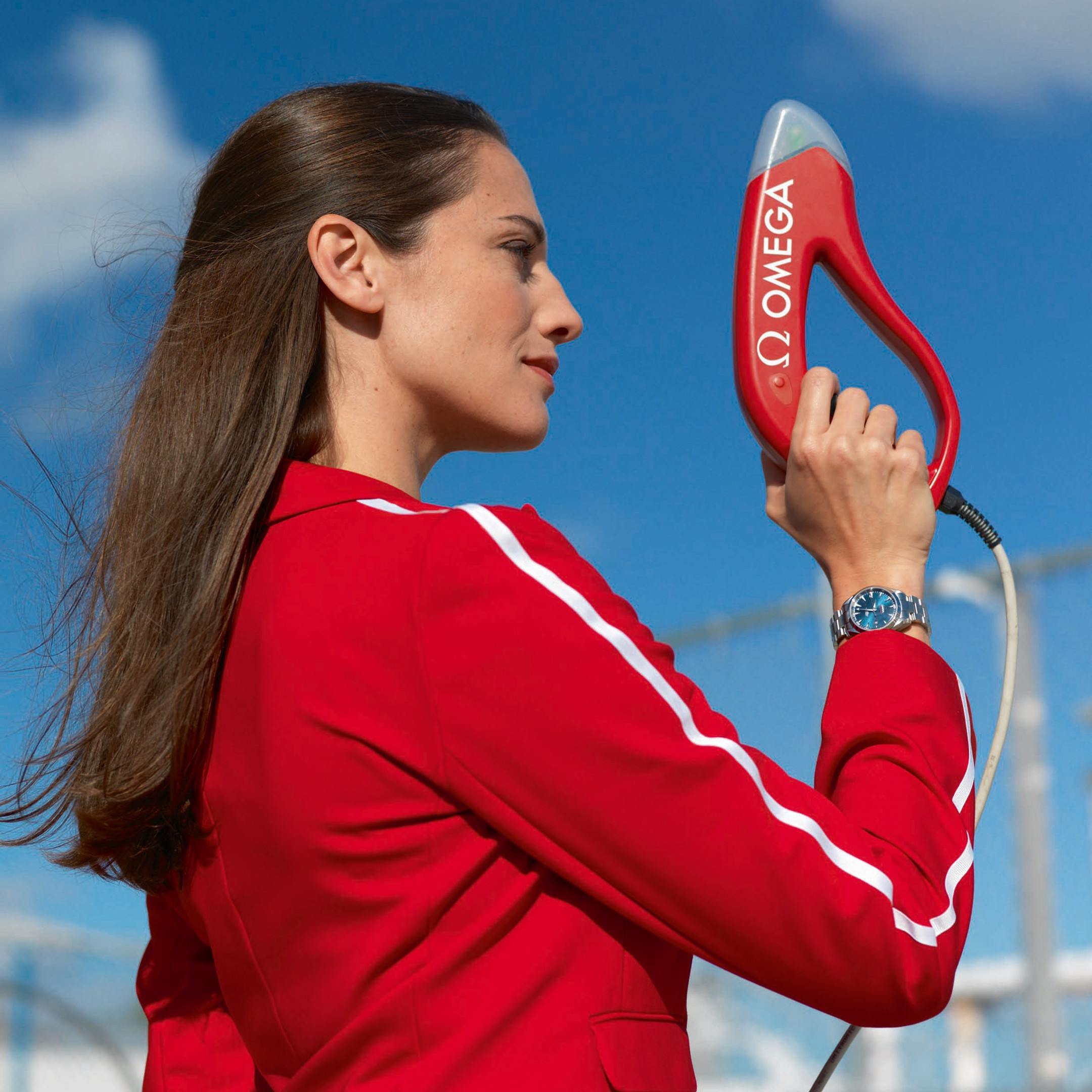 Track and Field’s governing body, the IAAF, rules that any movement within 0.1 seconds is a false start because tests have shown that the brain cannot process and react to a sound in under that time. When an athlete leaves the block, they increase pressure against the block to propel themselves forward. This increase in pressure over time can be observed as a “force curve.” An on-site computer can detect whether an increase in pressure was in reaction to or in anticipation of the starting gun.

At The Finish Line

Once the race is underway, the camera takes over. The sleek Myria is the latest generation camera in Omega’s Scan ‘O’ Vision line. A Nikon mount allows a variety of lenses to be used depending on the sport.

A digital inclinometer sets the optimal height for the camera to get the best field of view for each athlete. In track and field, the winner is determined by the first chest to cross the finish line – a contrast to other sports like swimming in which the first body part to touch determines the winner. 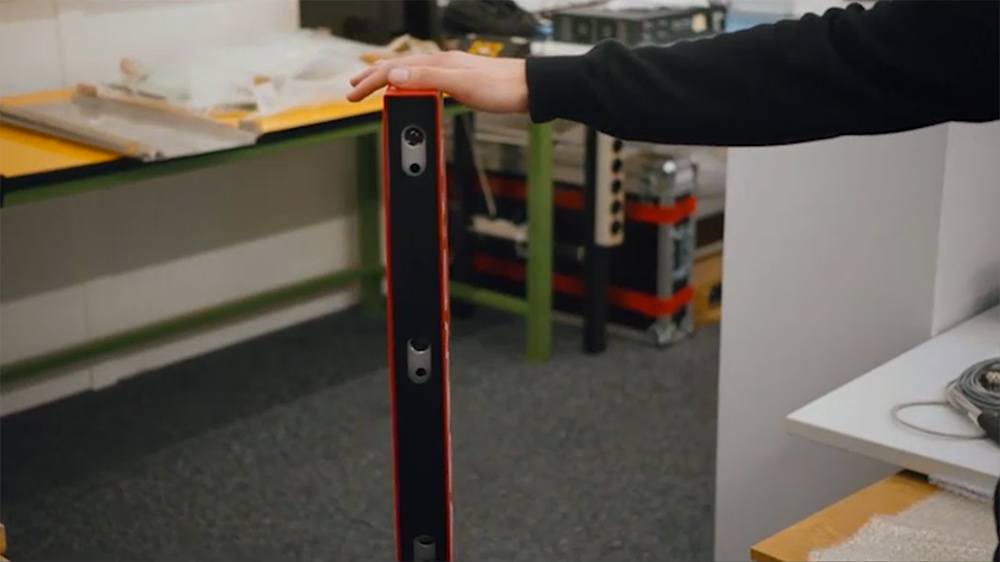 The newest photocell towers house 4 photocells – up from 2 at the last Olympics – provide a bigger “bandwidth” of coverage at the finish line, which allows more “body patterns” to be detected at the finish line. According to Omega, this means that the photocell heights don’t have to be altered for different races like the hurdles. 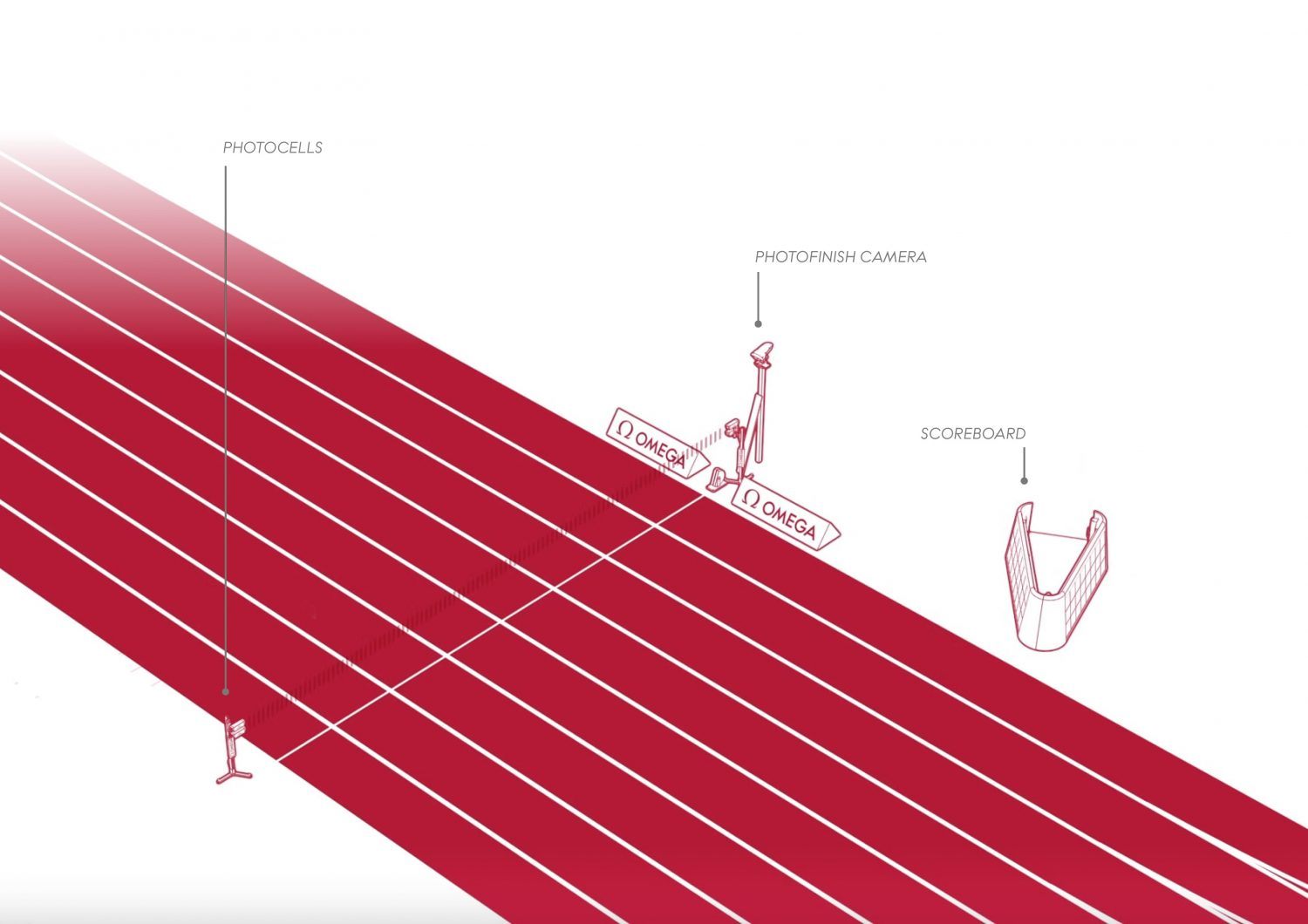 The camera scans the first 6mm of the finish line at 10,000 scans per second to create highly detailed time slices. Interestingly, although modern timing systems can record times to the millionth of a second, finish times in track are still recorded in hundredths of a second.

The same is true in swimming, even though FINA (swimming’s governing body) previously recorded times to the thousandth of a second. This changed in 1972 when Swede Gunnar Larsson beat the American Tim McKee by 0.002 second. According to Deadspin:

In a 50 meter Olympic pool, at the current men’s world record 50m pace, a thousandth-of-a-second constitutes 2.39 millimeters of travel. FINA pool dimension regulations allow a tolerance of 3 centimeters in each lane, more than ten times that amount. Could you time swimmers to a thousandth-of-a-second? Sure, but you couldn’t guarantee the winning swimmer didn’t have a thousandth-of-a-second-shorter course to swim.”
Even though the IAAF (track’s governing body) limits timing resolution to a hundredth of a second, they still use the photo finish to determine winners with the same time. In the 1996 Atlanta Olympics, American Gail Devers beat Jamaican Merlene Ottey with the same time of 10.94 in the 100m Final.

Ottey officially protested the final, but IAAF judge Daniel Lamare stated, “It was an easy decision to make, it wasn’t difficult. Once the picture wa enhanced it clear shows Devers was five centimetres ahead.” 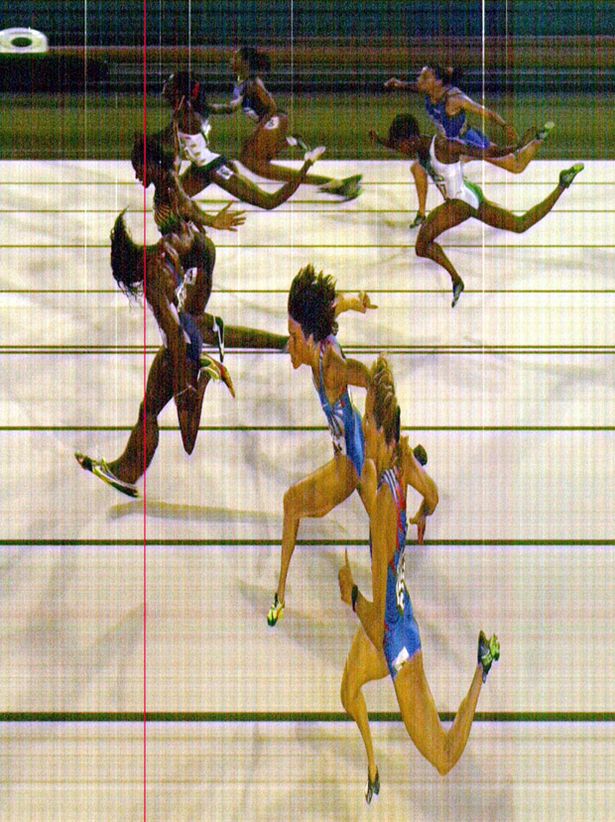 Gail Devers beats Merlene Ottey at the 1996 Atalanta Olympics with a photo finish.

In the women’s 400m final, a diving Shaunae Miller beat favorite Allyson Felix by a mere 0.07s. The finish line camera proved that Miller’s torso landed ahead of Felix. 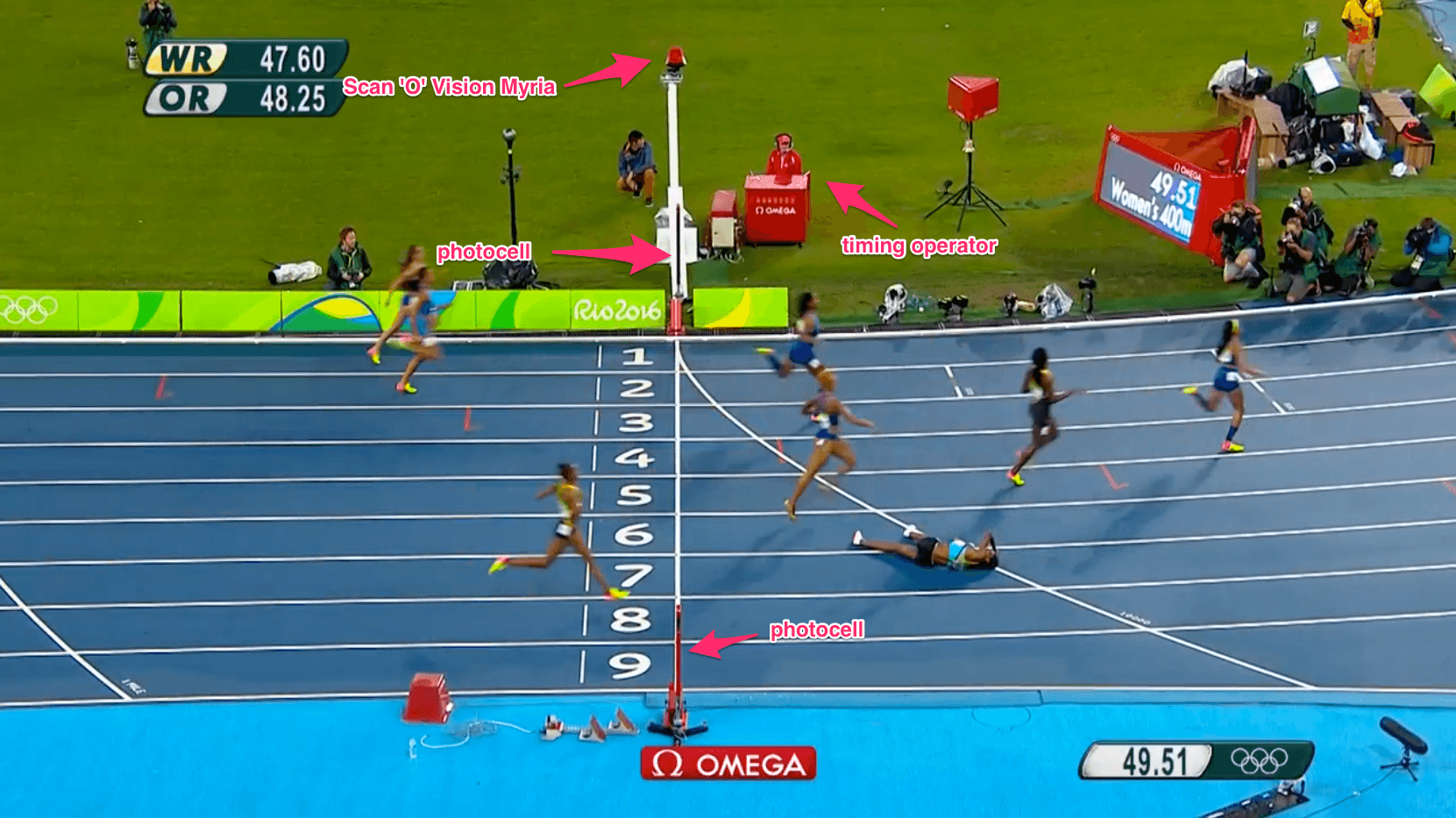 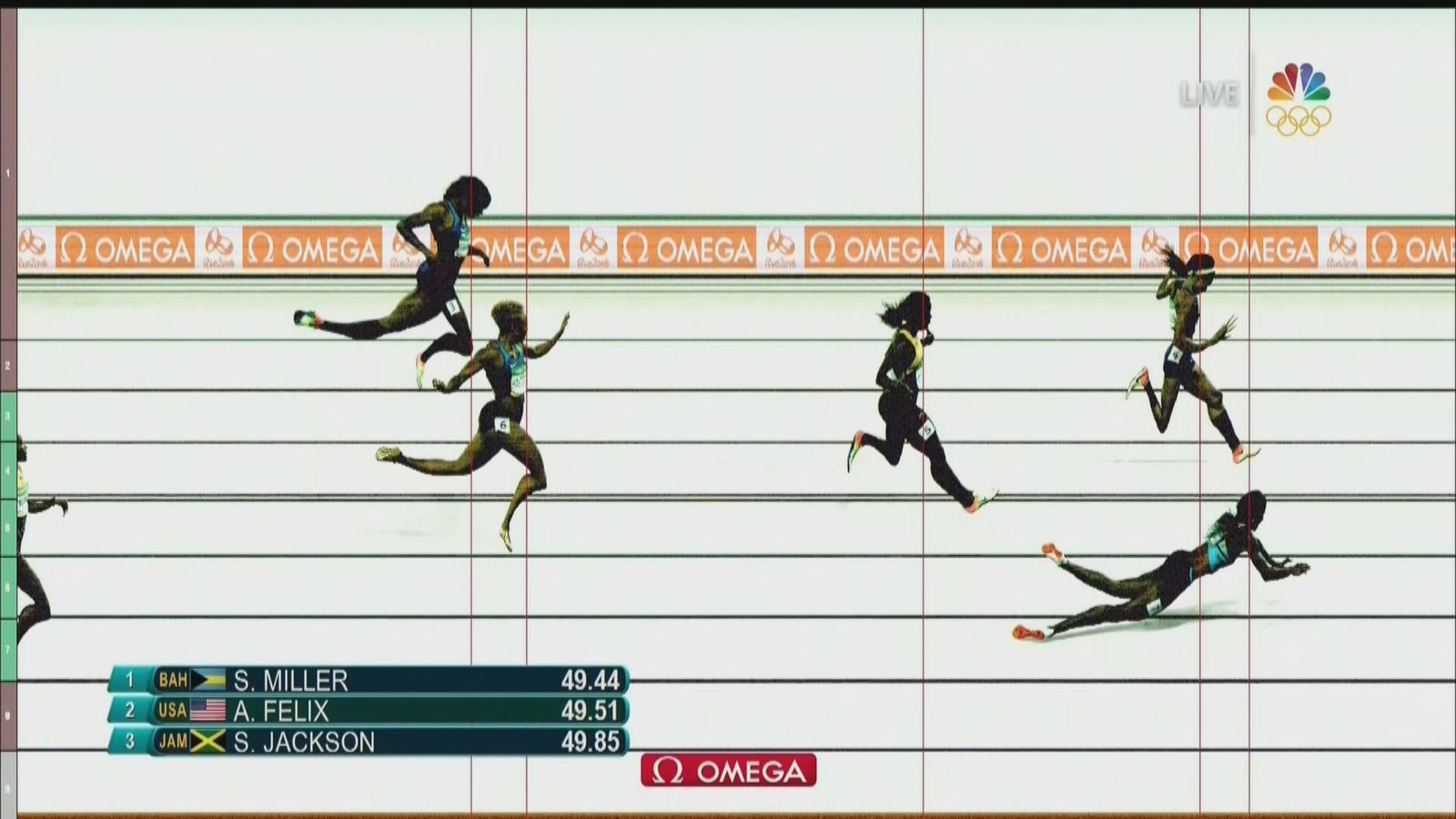 Technology will undoubtedly continue to improve into the 2020 Olympic Games in Tokyo whether we actually need them or not. Only time will tell.

Astrophotography: How I shot Comet 46P from start to finish
« We are giving away the best time lapse system ever – the Genie Pan Track Kit
How to build your own DIY camera jib for overhead shots for less than $35 »