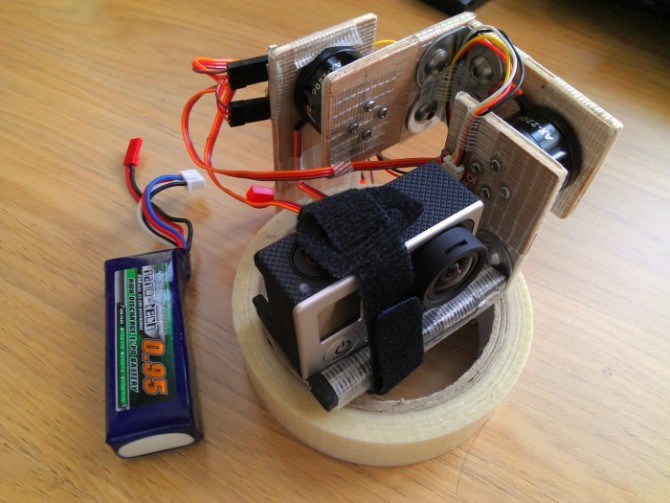 Ever since the MoVI made it’s first appearance, we’ve seen many new players enter the market. From established companies like DJI to emerging Kickstarter campaigns. But this build by Oscar Liang takes small form factor and hack-from-scratch to an entirely new level.

The gimbal, which can work both hand held or on a drone, is made entirely from scrap wood and some metal brackets.

I don’t have a 3D printer, neither a CNC machine nor any other professional tools. I will be only using any household tools you are likely to get, scissors, screw drivers, cutter, and pliers. Material wise I will be using styrene sheet, and plywood sheet. Some metal angle brackets, screws and nuts.

I decided to use plywood, because it’s light weight, rigid and not easy to bend. Also it’s easy to drill holes on them with only a screw driver and knife

The build is not complicated and would definitely be a good starting point for anyone making their first steps into the DIY route of gimbals.

The PID (proportional-integral-derivative controller, a fancy name for the software that controls the motor) that Oscar uses is not 100% tuned yet, so you’ll see the occasional jump or jerk but it is just so much better than an unstabilized footage.

Here is a full run of using the gimbal and a Gopro Hero3 Silver.