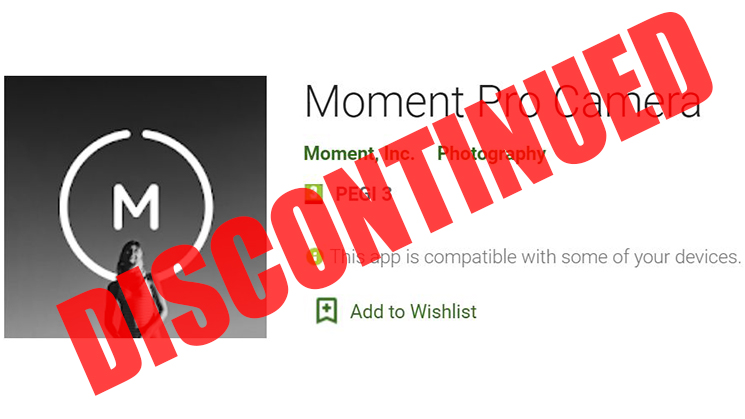 Moment, the company behind the Pro Camera app, has just published some bad news for its Android users. Due to inconsistency in the OS, it has become too complicated to keep developing the app so that it works on different Android phones. Therefore, Moment has decided to ditch it completely and only keep the iOS version.

The company issued a statement reasoning the decision. “It breaks our heart to say this, but we’ve spent the last two years, yes two full years, trying to deliver a pro-level manual camera app. It should be simple, but unfortunately it’s not” the statement reads. According to Moment, it looks like phone makers are to blame.

“The short is that phone makers like to create their own flavor of Android, each with different amounts of access to select camera features. The result has been a random compatibility list where each phone has different features in the app by phone model. The problem only gets worse every time a new version of Android comes out because it breaks the custom modifications these phone makers have made with their phones.”

Indeed, even new updates on the same phone cause some apps to crash, and honestly, I personally find it really annoying. “Despite years of messaging phone makers to share their changes and make camera features available to us, we haven’t been able to change this culture,” Moment writes. It appears that they just can’t keep up with all these changes and inconsistencies, and they simply don’t have enough engineers to keep developing the app.

The app has a 2.4 rating on Google Play Store and 4.6 on the Apple App Store. So it’s definitely not that the app itself is bad, it just doesn’t work well for Android users. Still, if you want to try it, Moment will leave it available in the Play Store but they won’t develop it any further. Instead, the company plans to focus on developing more iOS apps. “Their platform is more robust,” Moment writes, “and allows us to work on cool new features that customers are asking for.” So, I guess that only iPhone users will get the best out of the Moment Pro Camera app.