About three years ago Vincent Laforet released Reverie which was the first proof of concept that quality films can be shot with a DSLR, the Canon 5Dmk2. The movie stirred a huge commotion on the web. The thing is that even before releasing it, Vincent knew it was going to change the game with video and dSLRs.

Now Vincent is declaring what he thinks may change the game again – a hand held gyroscope power stabilizer – MōVI by Freefly Systems. 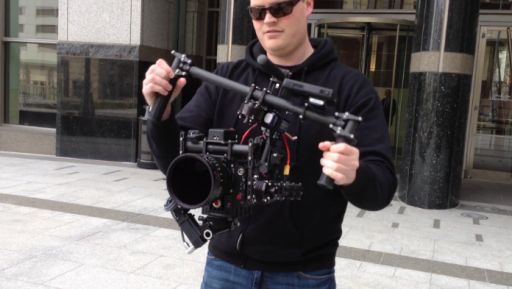 MōVI is a handheld 3-axis digital stabilized camera gimbal. This means that you shoot hand held, no tripod, no body mount, no jib, Steadicam or dolly and can still get smooth, great looking shots.

In fact, Vincent is so sure that he says it would be easier to use the MoVI and shoot a scene rather than trying to describe it:

“This device isn’t the end of the sticks, Steadicam, slider, dolly or jib to be sure… but it sure will make you think twice about using those tools on many of your shots when you find out how quickly this device allows you to execute a similar shot but in a fraction of the time. It can literally take longer to explain a shot, than it would to execute a perfect shot with the MōVI. Heck you’ll even think twice about every using a tripod for a quick pan or tilt shot – when you realize you can do that with a “push” or a circular forward movement left (a curved dolly track…) Except you don’t need to lay track down”#

If you are not sure, just watch this BTS that shows how stabilized it is even when cameraman is running full speed.

Here are some of the point that Vincent highlights for why this is such a game changer:

For a demo of how stable the thing is, here is an entertaining tail-chasing demo

There are currently two hand-on accounts on using the movie, the one we mentioned from Vincent Laforet and a second one from Jessie Brauning.

Finally, here is the movie Vincent shot entirely with the MoVI. Quite a proof of concept.

« A Great Lecture About Photography and The Copyright Law
How To Convert A Waste Basket, A Drawer Organizer And A Sprinkler Donut Into A Pro Matte Box »