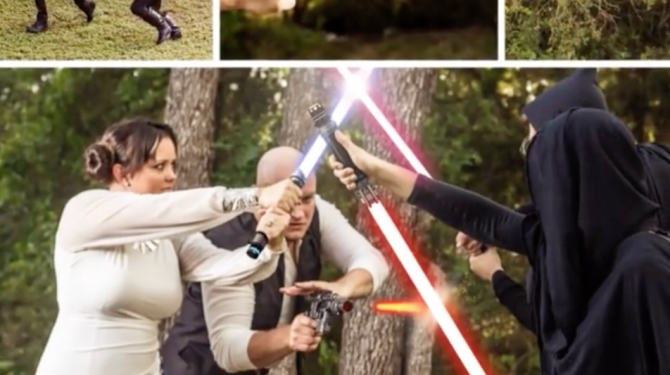 A lot of people love Star Wars.  Granted, I’m not one of them, but I’m beginning to learn that my opinion doesn’t necessarily impact the choices of the rest of the world.  (Someday this will change…)  Daniel Grove is one of those who loves Star Wars.  Paying homage to his beloved science fiction genre, the Texas-based photographer teamed up with couple Angel and Kyson to create an engagement shoot of epic proportions.

In a galaxy not-so-far-far away, they brought the fight of the Galactic Empire to the Texan countryside.  With full Tatooine-esque (Tatooinian-esque?  Tatooineü-esque?) wardrobe and makeup, the couple fought for their mortal survival against Sith Lords to eventually win the day.  (I love how it looks like Kyson is “slip-thumbing” his laser gun…)

“The idea of this shoot started with a light hearted joke on facebook to a friend of a friend but then things got serious… next thing I know I’m 3 months in to planning an elaborate story boarded shoot with CGI + hand crafted props, and some impressive costuming skills.”

What stands out to me the most isn’t necessarily the creativity or the special effects, but the sheer planning that went into this.  Three months of planning is huge.  As seen at the opening of the video, Grove storyboarded the entire shoot, planning out how it would all go down…a process far more involved than any I’ve ever executed when working with a couple.

When shooting the scenes, wooden sticks took the place of lightsabers.  The saber handles (or atomic generators, or whatever you call them) were rendered using Blender and digitally substituted (along with their radium beams of awesomeness) in post-production.

So far as we know (not that we asked, of course), nobody was actually harmed in the making of these images.  We can only hope that this shoot was not a metaphorical (or, God forbid, literal) harbinger of events to come in their future life together.  But, whatever the eventual outcome may be, we wish them well and thank them, Daniel, and their friends from the dark side for this piece of photographic inspiration.