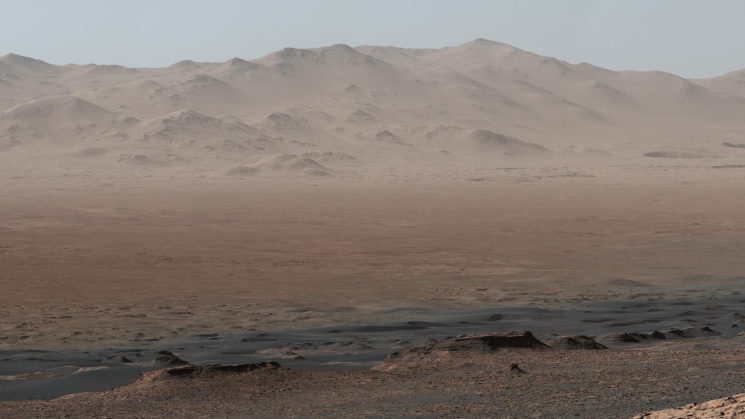 NASA’s Curiosity Mars rover has provided us with some spectacular (but also fun) photos so far. After capturing amazing Earth-like clouds, it has again captured a sight that might remind us of our home planet. The rover reached the top of Vera Rubin Ridge and captured photos that were stitched into a breathtaking panoramic landscape.

The panorama shows interior rim of the Gale Crater. Curiosity captured 16 side-by-side photos on 25 October 2017 with the wide-angle camera in its left eye. NASA stitched the images together to create the final panoramic image. They also corrected the white balance. As a result, the colors of the rocks look like they would under daytime conditions on Earth. It’s probably because of this that this landscape reminds us of some areas on Earth. I’ve read some comments saying that it reminds them of Mojave Desert.

NASA has also shared an annotated version of the panorama you can see here. It shows the rover’s approximate path since its landing in 2012. The image marks some of the sights the rover has investigated so far, as well as some geological features visible in the scene.

This cloudy landscape photo was taken on Mars

« British Vogue shocks public after posing nude Hadid sisters together [NSFW]
Smashed your GoPro? Their Plus service will replace it, no questions asked »