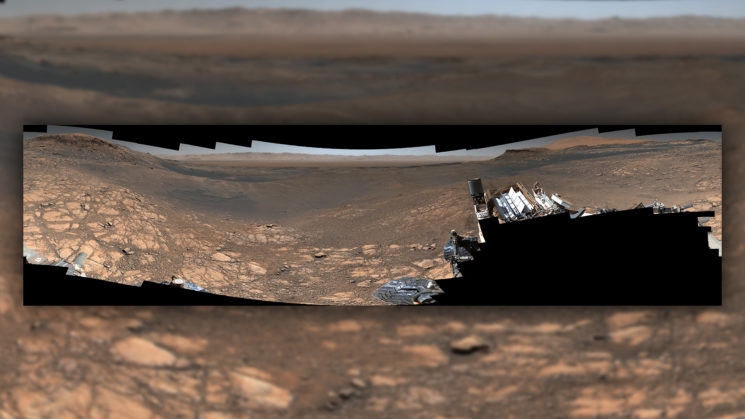 NASA’s Curiosity rover on Mars has created some wonderful imagery since it landed on the planet’s surface back in December 2012. Its original two-year mission has been extended indefinitely and it continues to pump back a lot of data and gorgeous photography to earth. It’s even shot its own selfies.

Now, though, it’s really outdone itself, by capturing almost 1,200 individual images over four days to create this stunning 1.8 billion pixel panorama. This beats its previous record by a whole half a gigapixel, and boy is it a beautiful image.

It might be difficult to believe when seeing the image that we’re actually looking at the surface of another planet. It just looks like a desert wasteland of rock, sand and dust. But as mentioned in the video, when you start to see details of things like 3-mile wide Slangpos crater, you’re soon reminded that this definitely isn’t on earth.

NASA explains that between November 24th and December 1st, 2019, while many of the mission team were away for Thanksgiving, Curiosity was tasked with a number of things to do. But these things meant that the rover was essentially stationary. This gave it the rare opportunity to shoot the almost 1,200 images needed to create such a huge panorama. And it actually created two!

The image above was captured using the “Right Eye” telephoto lens (equivalent to 100mm full-frame field of view) atop its Mastcam. It shows Glen Torridon, a region that Curiosity is currently exploring on the side of Mount Sharp. The telephoto lens on this camera allowed for some great detailed images, despite only being a 2-megapixel camera capable of producing 1600×1200 images.

But this lens wouldn’t allow Curiosity itself to appear much in the shot. So, a second image was created. A 650-megapixel view, using the “Left Eye” camera with its 34mm full-frame equivalent field of view lens. It’s also 2-megapixels.

Over the four days, NASA says Curiosity required more than six and a half hours to capture all the individual shots, which had been pre-programmed by the Mastcam operators to ensure they were all pointing in the right away and that they focus was accurate. The images were shot between noon and 2pm “local Mars time” each day.

You can find out more about it and download the original full-size images over on the NASA website.