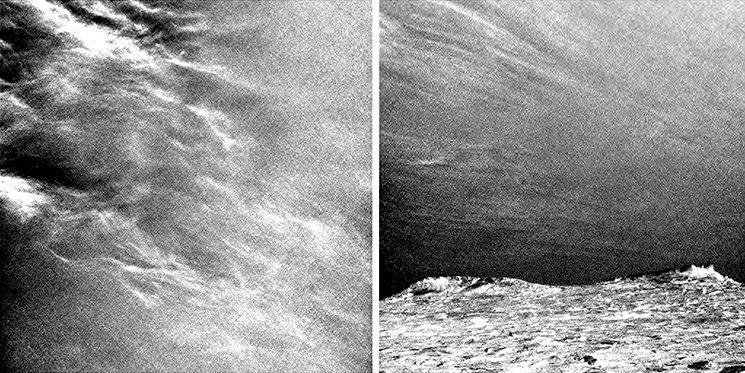 Last month, NASA’s Curiosity Rover captured a remarkable sight in the sky above Mars. It shot clear images of wispy cirrus clouds that look like those we have on Earth. While they’re common on our planet, they are very rare on the Red Planet, which is one of the things that make these images so important. What’s more, they reveal Mars’ distant past, when these clouds may have enabled the water to flow on the surface.

The first set of eight photos shows the sky with the camera pointed straight at it. For the second one, Curiosity lowered the camera and got some shots of the sky with the mountains in the foreground. Later on, there was the third set of shots of the sky, but the clouds had vanished by then. Charissa Campbell of York University, Canada enhanced the images. They show frame-to-frame changes in the sky for all three sets of photos:

According to NASA, “these clouds are the most clearly visible so far from Curiosity.” John Moores of York University, Canada explained that the clouds are likely “composed of crystals of water ice that condense out onto dust grains where it is cold in the atmosphere.” He adds that “the wisps are created as those crystals fall and evaporate in patterns known as ‘fall streaks’ or ‘mare’s tails.’” On Earth, clouds like this appear on high altitudes, but the rover doesn’t have a way to determine the altitude of the clouds on Mars.

Curiosity rover first landed on Mars on August 5, 2012. Since then, it has been exploring the environmental conditions of both modern and ancient Mars. The latest images of the clouds could tell scientists more about Mars’ ancient history, since they used to be more common on this planet, according to a study. And for us regular mortals, these images can connect something so familiar to us with an unknown, distant and cold planet. It makes your imagination more colorful, doesn’t it?

« How I see the world differently since switching from amateur to professional photographer
Your Microsoft Surface device could break within two years, according to Consumer Reports »