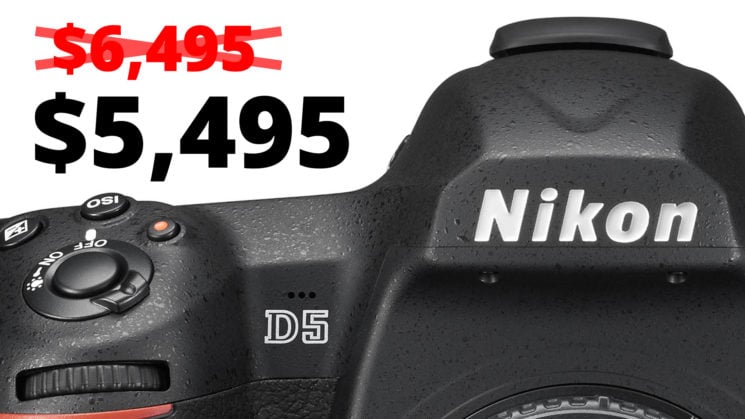 There’s no word on exactly when Nikon will officially announce that the D6 is done, dusted and going to be shipping, although it’s expected sometime in early 2020, possibly around February. They have so far made a “development announcement” stating that they’re working on it, and that it’s going to be coming at some point, but that’s about it.

Ahead of an official release announcement, though, it looks like B&H are already trying to clear their shelves of Nikon D5 bodies. Now you can pick one up for $5,495, a sizeable $1,000 discount off the regular price.

Naturally, the Nikon D6 should be a pretty significant upgrade over the D5 if the history of Nikon’s flagship DSLRs is anything to go by. But the release of the D6 won’t make the D5 any less capable than it is today. So, it’s still a pretty solid investment if you need that kind of body.

The Nikon D5 features probably the most advanced autofocus system available in a DSLR with 153 autofocus points, a 20.8-megapixel full-frame sensor, expanded ISO up to an insane 3,280,000 and 4K UHD video. It also has a 3.2″ 2.36m-dot touchscreen LCD, easy autofocus lens calibration, and a bunch of other features to make your shooting life easier and your workflow more efficient.

« Is it time we disclosed image edits with universal symbols?
How to modify an Ikea clock to turn it into a red light darkroom timer »