Although the darkroom isn’t quite as common as it once was, it seems to be gaining a resurgence of late. Every day I see people buying and selling darkroom equipment in Facebook groups and various online classifies. But a lot of the older electronics kit just doesn’t work anymore, and repairing it isn’t always easy, or even possible.

But, now we have plenty of other options to replace some of those electronic items, even if they need to be modified. Ikea’s Klockis, for example, is potentially an ideal little darkroom timer, but it needs modifications in order to make it safe. In this video, photographer Markus Hofstätter shows us how he modified his Klockis for use in the darkroom.

The Klockis is great because it has a minimum amount of buttons and hassle. To switch between modes you just rotate the whole unit. The problem is, as you rotate the unit through each of the functions, the display cycles through red, gree and blue illumination in order to give you an easy way to instantly see which mode you’re in. 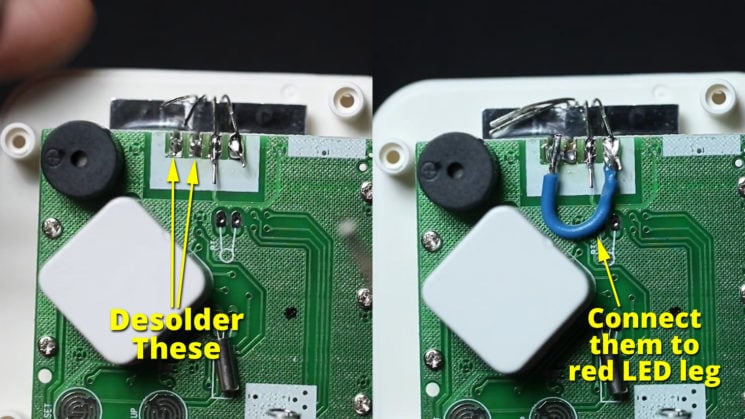 Markus’ modification gets rid of the green and blue, making sure that the display stays red, and darkroom safe, no matter which mode you’re in. It’s pretty simple to do. Just remove the front cover (make sure to remember which symbol is at the top), unscrew the faceplate to reveal the insides. Then it’s simply a case of desoldering the legs to the blue and green LEDs and tying them both to the leg of the red LED with a small piece of wire.

This way, no matter which LED the little clock tries to light up, the only one that can get any power is the red one. Problem solved. Now just screw it back together, stick on the front cover, and you’re good to go.

It’s a very simple modification for an inexpensive timer, that only takes a few minutes to perform, and now your darkroom is safe from that pesky green and blue light.

If you want to grab your own Klockis and do this for yourself, they’re available for less than $10.

Maya is “the only darkroom timer you’ll ever need”

« B&H has knocked $1,000 off the price of the Nikon D5, ahead of the D6 release
Winning photos of 2019 Environmental Photographer of the Year show devastating impact of climate change »