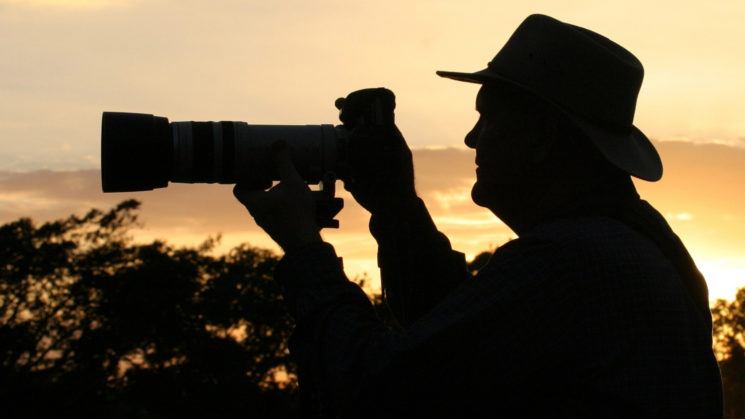 The practise of using bait to attract owls and other wildlife is a controversial topic. On the one hand, it can remove the fear of humans from rare and protected species, putting them at risk. On the other, how is it any different to putting out a feeder for wild birds in your garden? Then there’s also the chance that the humans can put themselves and others at risk as more dangerous species lose their fear of people.

NPR reports that earlier this winter, photographer Michael Furtman was driving along the North Shore of Lake Superior. He was looking for Great Grey Owls. Several of them had flown down from Canada in search of food. When he pulled off onto a dirt road where he’d seen them the previous night, he saw one, along with a pair of people recording video of it.

Furtman told NPR that he backed off initially, to let them have their time with the bird. Then when he saw one put out a mouse to bait the bird for the video. Naturally, the bird did as expected and dove onto the mouse in front of the camera. Furman drove off in anger, but then returned shortly after to confront them. He filmed the conversation and posted it to Facebook.

It’s understandable why Furtman was upset. Like many others, he sees it as unethical. It doesn’t capture the animals behaving naturally, and it can actually do them more harm to owls and other species than good.

James Duncan is a Canadian biologist, owl expert and director of Manitoba’s wildlife and fisheries branch. He told NPR that the main concern is that the animals can become habituated to humans.

You’re essentialy training the owl to lose its fear of humans and associate food with humans, so then they become bolder

This can lead to owls and other animals being attacked by humans when those people mistake a request for food as an attack. And it can also make the animals dependent upon humans, because it’s less effort than having to hunt. This can lead actually lead to them starving when the people quit coming and they’re not fit enough to fend for themselves.

The other side of the debate are those that don’t really see it as being any different to feeding birds in your garden from a feeder. The difference, though, is that you’re usually not sat out by the feeder 24 hours a day. The birds aren’t associating you with the food, they’re just finding the food. If you walk out of your back door and into the garden, the birds will fly away.And most of those birds aren’t hunters, they’re scavengers, looking for whatever they can find wherever they can find it. They don’t associate the food with you.

Terry Crayne is one of those people on the other side who admitted to NPR that he uses mice to entice owls. He says that many of the people he knows who are against the baiting of owls will happily go out and hand feed deer and other animals. He sees it as hypocritical. How can you be against the feeding of one form of wildlife, but then actively participate in the feeding of another?

And he has a good point. I don’t agree that it’s right to bait wild owls, or any other bird of prey. But I do agree that there is kind of a double standard. Why is it ok to feed this wild animal but not that wild animal? The argument for disrupting natural behaviour still holds true.

I grew up around birds of prey, captive bred birds. I’ve flown and hunted with falconers and many different species of hawks and falcons since I was a kid. I’ve also photographed many wild birds of prey hunting over the years, too. There is a world of difference in the attitude, strength and fitness between a bird that’s used to being fed by humans and one that’s hunted in the wild all of its life.

We all know of peregrines and goshawks as being the fastest and most agile birds of prey. But you’ll rarely see the sights with captive bred birds they you do with those in the wild. Because they’re not out hunting, searching for food, flying and building up that muscle every single day, they’re just not strong enough. They don’t have to, because at the end of the day, whether they successfully caught anything or not, they know their keeper is going to feed them.

And this is what the wild animals learn, too. When a wild bird of prey is being constantly fed by humans, it will hunt less, and expect to be fed. Then they’re not strong enough to hunt for themselves or migrate as the weather changes. And this can have dire consequences for those animals.

And it’s not just owls and other birds of prey. This and other such practices happen all over the world with many different species.

Regardless of your opinion on the above, many wildlife photographers simply see it as cheating. It’s not really wild if you’re interacting with or training the animal to get the photograph. And I really can’t disagree with this.

I still photograph many birds of prey and other unusual animals. But, these days they’re all captive bred and raised. I don’t claim them to be wildlife. But as they’re generally in the studio anyway, to do so would be difficult to say the least.

I tend steer clear of shooting wildlife photography these days for many of the reasons mentioned in this post. Baiting and other practices seem to have become so prevalent now, that it just doesn’t feel worth it any more. And with cameras being in the hands of more people than ever, it just seems to be getting worse. Shots that have been created through baiting can be difficult to compete with. You just normally don’t get that close to them.

On the rare occasions you do get those special shots of wildlife, people often just accuse you of baiting anyway.

How to shoot Bokeh Panorama for animals and wildlife photography

How to photograph dangerous animals from up close without approaching them