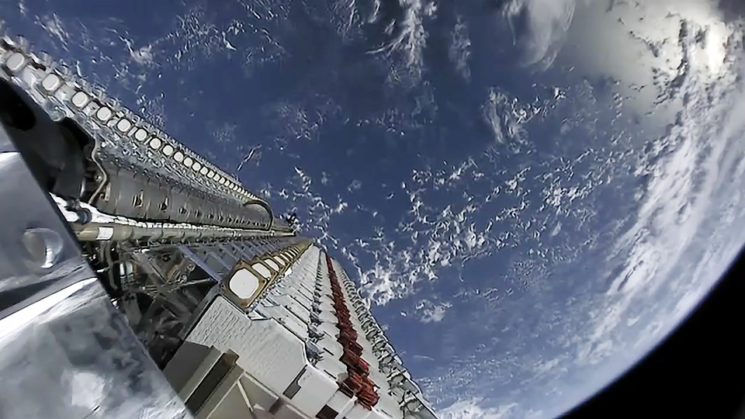 On 23 May, the first 60 SpaceX’s Starlink satellites were successfully launched into orbit. They were caught on camera and they look spectacular while orbiting around the Earth together. However, the ultimate plan is to launch nearly 12,000 of these satellites. Have you wondered how it will affect the night skies? Astronomers are concerned that they will pollute the night sky, and astrophotography is only one of the areas that could be hindered by this many satellites in the orbit.

While they were gliding together around the Earth, the satellites were bright and clearly visible to the naked eye. However, astronomers are concerned that 11,943 of satellites this bright will change the view on the universe. Darren Baskill, an outreach officer of physics and astronomy at the University of Sussex, told The Verge:

“It’s going to become increasingly likely that the satellites will pass through the field of view and essentially contaminate your view of the Universe, and it’s going to be really difficult to remove that contamination away from our observations.”

Put simply, astronomers use very long exposures to take photos through their telescopes. This way they can gather and study light from distant galaxies. Now imagine a super-bright object going through the frame during a long exposure. It would leave a streak of light that would take up a large portion of the image. Of course, the same thing would happen even if you do astrophotography for the sake of art, not science.

Bruce Macintosh of Stanford University estimates that the Large Synoptic Survey Telescope will “likely have to deal with between one and four Starlink satellites in every image within an hour or two of twilight,” National Geographic writes. “For astronomers I think this is more of a nuisance than a disaster, but changing the sky for every human needs talking about,” he recently tweeted.

For astronomers I think this is more of a nuisance than a disaster, but changing the sky for every human needs talking about. https://t.co/H5RjFIIZz0

According to the most recent report from the European Space Agency, there are about 5,000 satellites in orbit around Earth. Around 2,000 of them are still operational, and even they occasionally pose a problem for astronomers. If that number increases for another 12,000 satellites, it could cause serious light pollution in the night skies, causing headache to both astronomers and astrophotographers.

Elon Musk has responded to these concerns, saying that he would direct his team to think about how to reduce the Starlink satellites’ reflectivity. However, as National Geographic notes (and I tend to agree) – this is something we should think about before putting the satellites into orbit.