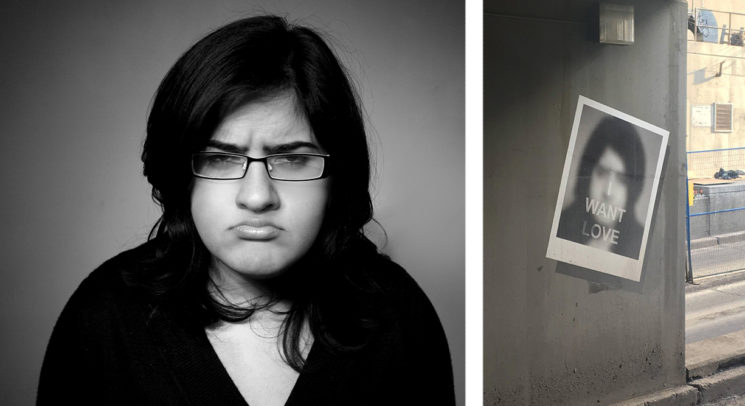 In 2015, the city of Calgary commissioned artist Derek Michael Besant $20,000 CAD (around $15,500 USD) for a public exhibit. Two years later, the exhibition has been taken down because it turns out that Besant used copyrighted images without permission.

A traveler to Calgary noticed that one of the images in the installation resembled UK Comedian Bisha Ali. After Ali was notified, the deception began to unravel and the artist was exposed for fraud.

As DPReview writes, the exhibition titled Snapshots was a part of Calgary’s 4th Street S.W. Underpass Enhancement Project. The project features large Polaroid-like photos placed on both sides of the underpass. All the photos show blurred faces in black and white, with short titles printed over them. The concept of the installation is described on Calgary’s official website:

The portraits represent a cross-section of what any downtown core of a big city reveals and conceals as the flow of occupants. The reference to Polaroid SNAPSHOTS invites an immediacy… an intimacy, to what is a high traffic public art context. And between the hundred steps it takes to traverse this corridor, we might just come face-to-face with ourselves…

The website also publicly states that the budget for the project is over $15,500 USD. As Avenue Calgary reported back in 2015, this expensive project required Besant to visit the underpass “with a camera, recorder and notepad.” He allegedly observed those who walked through it and interacted with them to get an idea who they were. However, all this turned out not to be true.

Bisha Ali wrote on Twitter that a friend had messaged her to say that he had seen a photo of her included as part of a public installation in Calgary, together with a snapshot of it. The blurred image of her was originally a photo taken by Jayde Adams.

While Besant claimed that the photos were taken during his interaction with the passenger, Ali states that she has never been there. Furthermore, Ali recognizes the photos of other comedians included in the installation: Hardeep Singh Kohli, Chris Betts and Sofie Hagen, to name a few.

As Maclean’s reports, it turns out that all the photos were lifted from the 2015 Edinburgh Fringe Festival program. Most of the photos were altered slightly before being blurred.

Maclean’s also writes that Besant didn’t reply to multiple requests for comment. Still, he responded to an investigation that Calgary Mayor Naheed Nenshi requested in response to the public outcry. Head of Community Services, Kurt Hanson, reportedly issued a statement, saying that the artist advised officials to remove the installation. Judging from Ali’s last tweet in the saga, the installation has indeed been taken down:

In addition to the exhibition being taken down, both Besant’s website and social media pages are also unavailable.

Watch: Monkey steals a man’s phone and takes a bunch of photos