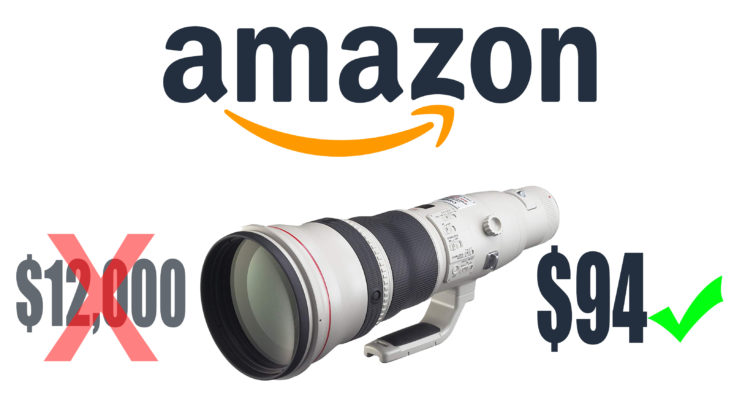 Amazon offered some pretty nifty deals on Prime Day earlier this week. But thanks to several pricing mistakes, some users were able to score deals one can only dream of. There were a few cameras, lenses and kits were sold for around $100, some retailing at a regular price of whopping $12,000!

The first “deal” is pretty neat: it included a $548 Sony Alpha a6000 with a 16-50mm lens was listed at only $94.50. A user noticed it and posted it to Slickdeals, and it only got crazier from here. Users started noticing other “deals,” or better to say mistakes, and posted them to the website. All of them listed otherwise pricey gear at slightly more or less than $100.

“Bunch of canon lenses and camera, including EOS R or RF 28-70,” one user wrote. Another added that he found a $2,500 Canon camera also marked $94. Reading through comments, it turned out that it was the Canon EOS 5D Mark IV. One user wrote that he placed an order for this camera for $101.59 after tax. “Says it should be here tomorrow,” he added. In addition to the Slickdeals users, there was also this guy who scored a $1,000 Fujifilm X100F for $102.

Judging from the comments, the mistakes have been corrected now and all the gear is back to its regular prices. After all, even the official Amazon Prime Day deals are over. After this bunch of glitches, some lucky photographers ended up with tons of pricey gear they paid under $1,000. When the craze was over, one user wrote the comment that probably reflects the feelings of all of us who have missed these “deals:”

“After years of lurking around on this website, I made an account today just to post this very comment to state my depression of missing this deal. I will now go back to my corner and attempt to live vicariously through everyone else’s purchase wins.”