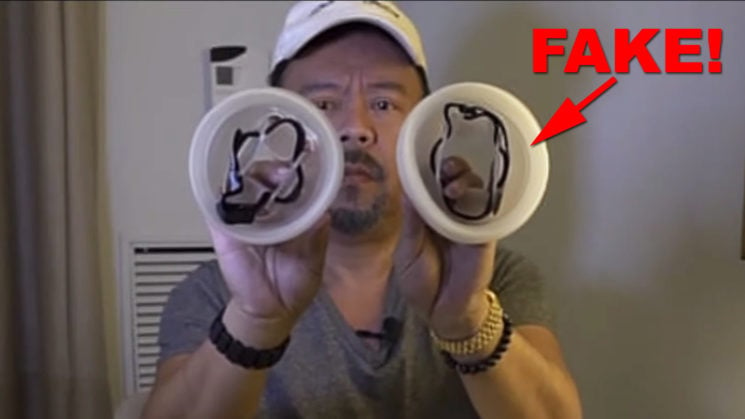 The Gary Fong Lightsphere has been a staple of wedding and event photography for years. And no matter how much some photographers wish they would just disappear, they insist on persevering. It seems demand for them is pretty high, too, as counterfeit Lightspheres, along with full Gary Fong branding are not only being made but even sold on Amazon.

Gary Fong himself bought one of the fakes from Amazon in order to make a video calling out these counterfeit products and showing the differences between the originals and the fakes.

The immediate sign that you’ve received the fake is the packaging – which is simply produced from a bad scan of the original of the artwork on the original box. You can see that the two example portraits differ dramatically in contrast and brightness compared to the originals.

But when you open the box, the differences become immediately apparent. For a start, the dome itself that goes onto the end of the unit doesn’t even fit and just falls out, and while it is still using a translucent white material, it’s much more opaque than the genuine article, which eats up a lot of light. This is something that Gary specifically avoided and says he carefully formulated the material used in his products to avoid this opacity and make them as clear as possible. 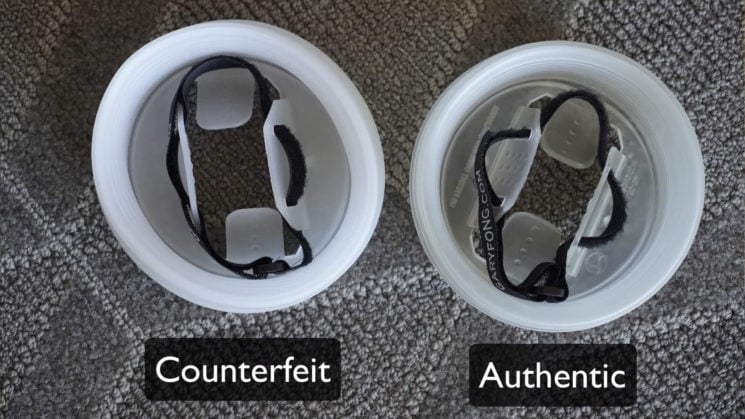 And if the box didn’t give it away already, these aren’t just clones, these are pretending to be the real thing, right down to having Gary’s website printed on the velcro strap which holds the Lightsphere onto your speedlight. 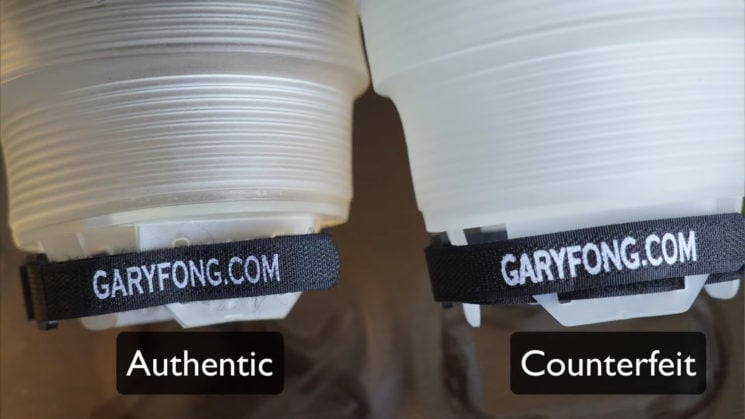 “Fulfilled by Amazon” doesn’t mean that you will necessarily get the real thing – as evidenced by the number of fake memory cards still often sold on sites like Amazon – just that the 3rd party seller you’re buying from is using Amazon’s order-fulfilment services. According to Consumerist…

Part of the problem is with Amazon’s inventory system, critics say. Third-party sellers sign up to shill stuff through Amazon’s order-fulfillment services. All those products often get pooled together by bar code, regardless of whether they come from the brands themselves or other distributors. That way, Amazon can grab whichever product that’s ordered at the nearest warehouse to the customer.

This means that if the fake packaging shows a duplicate of a genuine barcode, it’s just thrown into Amazon’s inventory, regardless of the source of the product. And this is something that is completely out of the hands of those manufacturing the products – which is extremely frustrating to folks like Gary.

It’s also something that the 3rd party sellers (except the one putting fakes in Amazon’s inventory) will have little or no control over, either, because when they’re all lumped together in the warehouse and Amazon just ships from the nearest one to the customer, those stores really have no idea whose inventory the item that ships to their customer will come from.

If you believe you have received a fake product from Amazon, regardless of whether it’s a Gary Fong Lightsphere or not, Amazon will take them back. Amazon’s A-to-z Guarantee covers this. So, contact them.