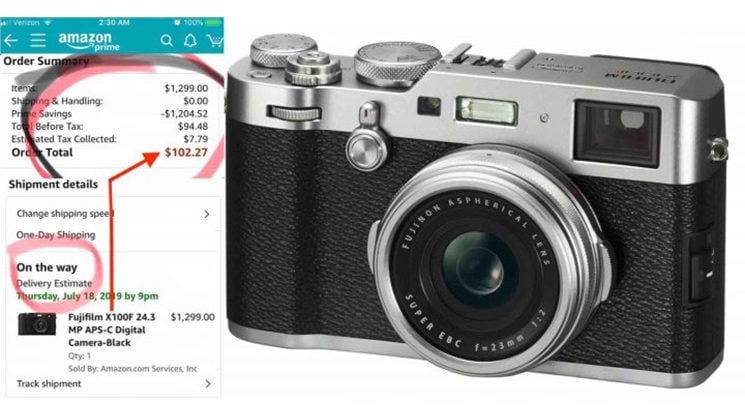 If there’s one certainty about Amazon’s Prime Day… uhh, Days? It’s that it’s pretty hectic. Everybody’s rushing to pick up the deals before they rush out, and staffers are trying to get listings up as quickly as possible. It seems that somebody was a little too eager to get a listing live without properly checking it, though.

According to Fuji Rumors, a member of the Fujifilm X100 Facebook group managed to pick up a Fujifilm X100F for $102. And it was sold and shipped by Amazon themselves. The regular price is $1,299, making for a pretty massive 92% discount, and according to the group member, the order is marked as “On the way” and is currently in the hands of UPS.

Today is the second and final day of the Amazon Prime deals, and for those of us in the UK, there are only a few hours left to go. For US members, you’ve still got much of the day left to pick up a bargain. But if you think you’ll be able to take advantage of this particular deal, think again. The price has already been bumped back up to its usual $1,299.

With many Amazon warehouse workers on strike during Prime Day as a protest against the “inhumane working conditions”, it’s not surprising that those who have gone into work today are stressing and screwing up.

But even when Amazon is running smoothly, there has been no shortage of pricing screw-ups in the past. This time, though, they seem to have honoured the price.

What Prime Day deals have you picked up this year?

The king of compacts: Ricoh GR III vs. Fuji X100F