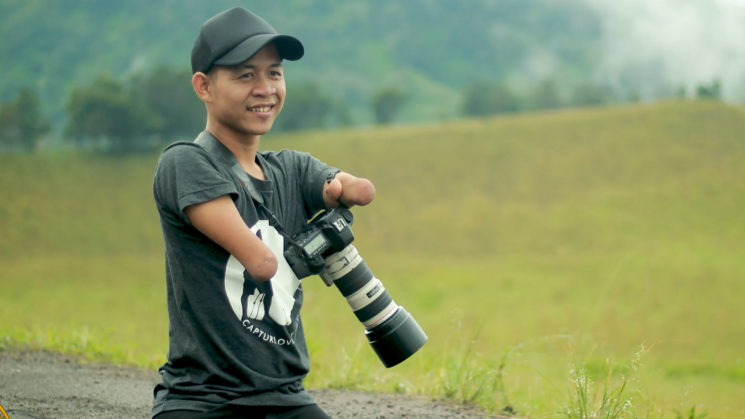 Sometimes, you come across people that just make you go “wow” and completely rethink your whole outlook life and passion. One such person is 24 year old Indonesian photographer, Achmad Zulkarnain. Born with no legs or hands, he doesn’t let it stop him from pursuing his dreams.

Achmad, who also goes by Dzoel, doesn’t see himself as disabled. He adapts his world to suit him, designed his own car, which friends helped him to build. He shoots better photographs than many of us and does his own retouching. After falling from a cliff while trying to photograph a waterfall, his first thought was for the condition of his camera. He also plays piano.

Dzoel has no hands or legs but he doesn’t let that get in the way of his photography.

Achmad is an incredibly inspiring guy. He makes no excuses, knows what he wants to do, and finds a way to do it. Not only does he not see himself as disabled, he thinks it’s “ridiculous” when others see him that way. And when you look at his work, it definitely doesn’t suggest that he might be at any kind of disadvantage.

He used to work in an Internet cafe, which offered a photography service. It caught his interested and he eventually bought a camera on credit. He just kept learning more and more about photography until he became known as a photographer.

To get around, Achmad actually designed his own vehicle. Which was built with the help of family and friends. “This is my legs”, he says while introducing us to his transportation.

Shooting with what appears to be a Canon 60D and 5D Mark II, Achmad’s work is very good. He says that he doesn’t use a tripod to help stabilise his camera, and he does all his own retouching.

Achmad just proves that it’s rarely our body holding us back. Simply our mindset. Thankfully, inspirational people like Achmad are there to remind us to keep pushing ourselves and our passions, and to stop making excuses.