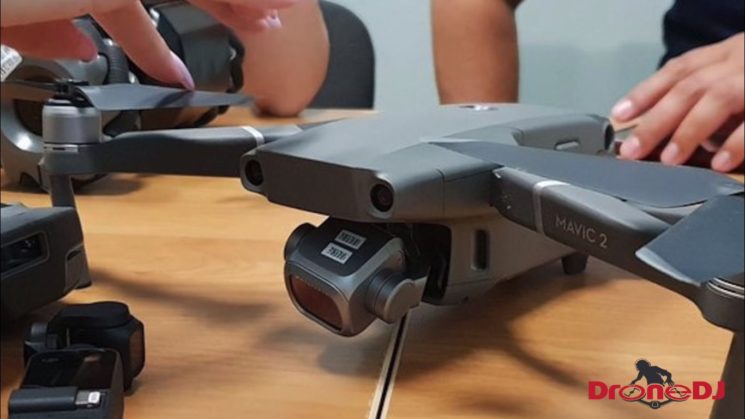 DJI Mavic II has been rumored for a while, and DJI recently announced an event in New York where they would present the drone to the public. However, a photo of the new DJI Mavic Pro II has leaked online, and it suggests that the drone will have 360-degree obstacle avoidance and a removable gimbal.

The new drone will officially be named “Mavic II” instead of “Mavic Pro II.” This may indicate that this is the basic, and not the Pro model, so it can possibly leave room for another DJI Mavic drone. It was supposed to be presented at the event on 18 July, but DJI recently postponed it for unknown reasons.

In the leaked image, you can see a couple of things. First, that the battery is mounted on the back and the top of the drone. When it comes to the gimbal, the photo suggests that there will be a removable gimbal (like on the GoPro Karma), giving you at least two options. A larger, gray one is mounted on the drone, and pay attention to the smaller, black one lying next to the drone.

“Quiet” propellers were rumored before, but judging from the latest update, it seems the Mavic II won’t feature the quiet propeller type.

Here are some more DJI Mavic II specs that have been rumored so far:

As for the camera, these are some specs speculated before, with a larger sensor being among the most significant upgrades:

The previously rumored price was at least $1299 for DJI Mavic II, maybe more. They will also offer “The FlyMore combo” which will obviously be more expensive. Since the official DJI event has been delayed, I guess we’ll have to wait some more before all this is confirmed. But until then, you can analyze the photo and the specs that have leaked so far and think whether you’d upgrade your gear with this drone.