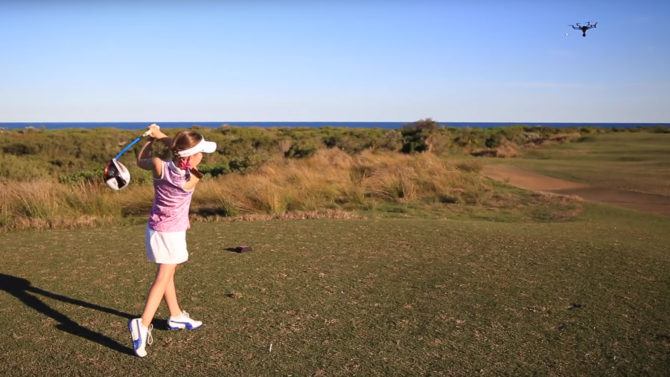 Drones are usually pretty good at staying stable. Especially when they have 6 or 8 props rather than the traditional 4 of a quadcopter. With Hexacopters and Octocopters you can even lose a blade, and it’ll still fly relatively well. At least long enough for you to land it. Apparently, though, not when hit by a flying golf ball.

The story goes that 8 year old up and coming golfer Ruby Kavanagh swung and accidentally hit the Yuneec Typhoon H drone that was filming her. Video of the incident shows parts flying off the drone, after which it banks then crashes into the ground.

On the face of it, it’s quite an amusing video. Even if it does involve a little schadenfreude. After watching it over a couple of times, though, I’m going to call bullshit.

I will give the young lady the benefit of the doubt and say that she may very well have hit the drone with the golf ball. Given that word class professionals required many practise swings, they proved it was doable. So, either she also had many practise swings or got very lucky, but this was definitely staged.

But there’s a couple of things that stick out to me. First, there’s the impact itself.

We see the ball hit, then something small falling off, followed by a piece of landing gear, NOT a propeller as many seem to have assumed. Presumably, the bit that fell of first was whatever was holding the landing gear in place. A good hit, but you can see that all 6 motors and props are still on the drone. 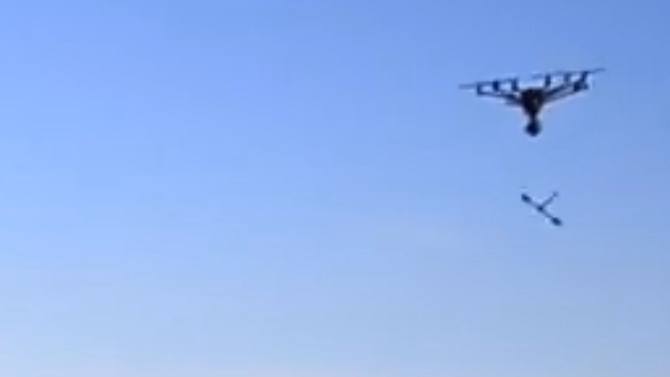 Then the drone sits there for a good couple of seconds before it randomly banks off to the side and straight into the ground. Even if it had lost a prop, it’s a hexacopter. They can fly with a motor down. That’s a big part of why they’re so appealing to filmmakers.

It seems very odd to me that it appears to instantly recover, then go wildly “out of control”.

There’s also the fact that the Typhoon H shoots the most beautiful 4K footage. I know several people that own one, and love seeing the footage they produce with them. So, why, then, does the footage of the ball flying towards the drone look like it was shot on a mid 90s webcam? 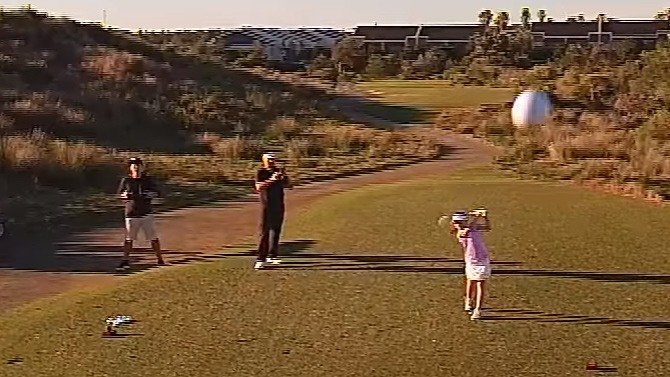 And, please, don’t even try to tell me that the drone falling from the sky must have corrupted the footage. It doesn’t work like that.

Again, I’ll give the young lady the benefit of the doubt on the shot. There’s no obvious fakery, although it’s so easy to make shots look genuine these days with little effort. Although, perhaps it is fake, which may be why the drone footage was downgraded so badly, too.

Ruby’s definitely very skilled, qualifying for the US Kids Golf World Championship. But, I still think this video is just an attempt to make her go viral, and reignite her gofundme campaign.

What do you think? Genuine accident? Or staged and faked in the hopes of going viral? Why does the drone footage look so low quality? Let us know your thoughts in the comments.

US Marshal Appears To Attack Pedestrian Photographer; Knocks Phone From Hands, Smashes It With Foot