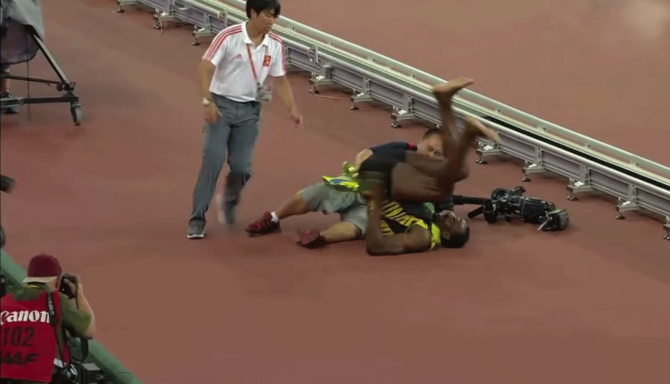 He may be the world’s fastest man, but he’s no match for a segway riding photographer. After winning the 200 meter dash at the World Athletics Championships, Jamaican athlete Usain Bolt was taking a celebratory barefooted stroll down the sidelines as he waved to the throng of cheering fans in the arena stands–it was a pretty standard series of events for the champion sprinter.

That is until this cameraman loses control of his segway and topples into an unsuspecting Bolt. It appears the cameraman was too distracted grabbing video footage to notice he was about to run into some railing. The photographer was bucked off the segway as it rolled into the back of Bolt’s legs, sending both men to ground.

Here’s a couple clips of the crash:

Fortunately, no one was injured in the incident (camera excluded), which makes it easier to enjoy the humor in it. And, speaking of humor, Bolt took the ordeal in stride. He quickly regained his composure and went about what he was doing. It appears there are no hard feelings towards the reckless cameraman as Bolt was cracking jokes about the incident soon after, “The rumor I’m trying to start right now is that Justin Gatlin paid him off,” Bolt said jokingly.

Justin Gatlin, the American runner who came in second place behind Bolt in the 200 meter dash, brilliantly responded, “I want my money back.”

I guess the moral of the story is to watch where you’re going when you’re taking photos and video. Hopefully, this photographer learned his lesson!