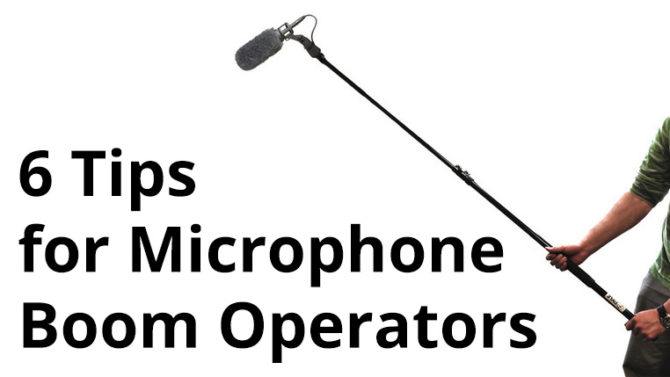 If you’ve been shooting video on your DSLRs for any length of time, you’ve realised that in-camera sound is awful. Perhaps you want to branch out to an externally boomed mic. Sounds simple, but there are some things you’ll want to keep in mind.

In this video from Aputure’s series 4 Minute Film School, we get some valuable tips from boom operator Stephen Harrod. Even if you’re not operating the mic yourself, it’s good information to know. Many start out having friends hold the mic, and you can help direct them with these tips.

When working as a boom operator, you’re in pretty close quarters to the crew and talent in your scene. Whether it’s actors or an interview, you don’t want to distract them from doing their jobs.

Keep a low profile, avoid distracting clothes bearing text or graphics. Wear dark black colours is especially useful so that you don’t reflect unwanted light or colours back into the shot.

2. Go to rehearsals and understand the blocking

Rehearsed scenes are like a dance. Where the talent and cameras will move is often highly choreographed to tell the story. Know where the cameras and talent are going to be moving so that you can move with them in a way that doesn’t interfere.

We’ve all seen a TV show where a camera is following an actor and a microphone creeps into the top of the shot. Don’t be that guy.

3. Be aware of the light

As well as knowing where the cameras and talent are, you need to pay attention to the lighting. The thing with light is that it casts shadows.

You need to know where the light is, whether it’s hard or soft, and where your shadow is going to be cast. You don’t want it appearing in the shot.

4. Pay attention to the camera

While the camera movements may be well rehearsed, people improvise. With handheld cameras and gimbals becoming more popular, the shot can rapidly change.

You need to keep an eye out for these movements, so you can adapt and adjust.

The focal length of the lens will give the boom operator an idea of how wide the shot is. This tells them how much range of motion they will have in front of the camera.

As somebody who’s held boom mics for many hours, I can tell you that my arms much prefer a shorter boom arm. Knowing that you’re shooting with a 105mm lens and not a wide angle makes their life much easier.

6. Be in sync with other departments

Having the entire crew work as a single cohesive unit is vital. There’s more to being a boom operator than simply getting good audio. Keeping good relationships with all departments is essential to ensuring everybody can do their job.

Are props or lighting equipment in your way? Will you get in their way as you move around to follow the action? Are certain clothing fabrics noisy? All these are issues that need to be dealt with respectfully.

What other sound recording tips can you offer? Let us know in the comments.

« Slow Mo Guys push it to the extreme with glass explosions at over 343,000fps
Faces of Foxes: Every Fox Has Different Personality »