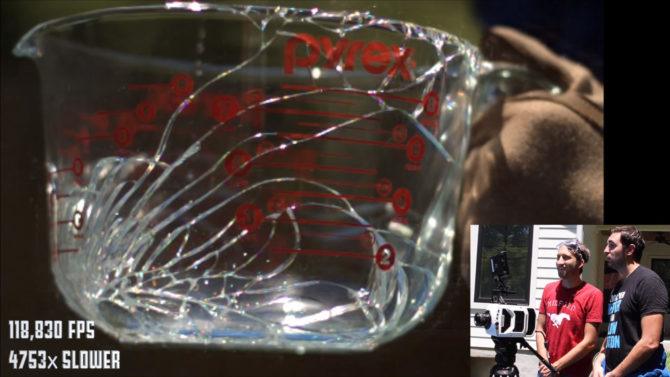 In the photography world, we’re used to the megapixel and high ISO races. When it comes to video, the race seems to be about frames per second. With frame rates getting ever faster, Vision Research are usually in the lead with their Phantom cameras.

It’s just a regular day at the office for the Slow Mo Guys, making things explode. In this case, Pyrex glass. Using a Phantom V2511, they begin filming at 28,000fps. They soon realised they weren’t anywhere near fast enough and knocked it up to an insane 343,915fps.

To give you an idea of just how much time gets slowed down at 343,915fps, 5.1 seconds generates over nineteen and a half hours of footage when played back at normal speed. For most subjects, time would appear to stand still.

For exploding glass, even this frame rate might be too slow. Despite the low resolution, we’re not going to complain. It still looks pretty impressive. It’ll be interesting to see how this footage might look recorded with the latest equipment 5 or 10 years from now.

How to record slow-motion sound for a tomato exploding at 60,000fps