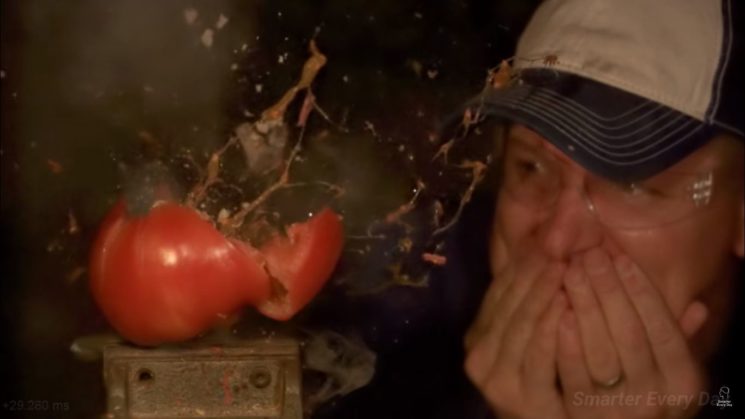 Have you ever wondered how ultra slow motion videos get their sound recorded? They don’t just record the real sound and slow it down along with the footage. In this video, Destin Sandlin from Smarter Every Day walks you through the process of recording sounds for slow-motion videos. Particularly, for a tomato exploding at 60,000 fps and a few other fun slo-mo videos.

To record his slow motion video, Destin uses a Phantom v2511 camera, which is capable of capturing 2/3 of a million frames per second. It doesn’t capture the sound, and a question people often ask him is how the sound is recorded.

This is where Gordon (a.k.a. A Shell in the Pit) steps in. This fun guy stands behind the sound effects of every slow motion video from Smarter Every Day. At the beginning of the video, Destin challenges him to create the sound for slo-mo footage of a rifle trying to blow out a candle. Then, they move to recording a tomato stuffed with an M-90 firecracker. “It’s like a birthday tomato,” Gordon notices. 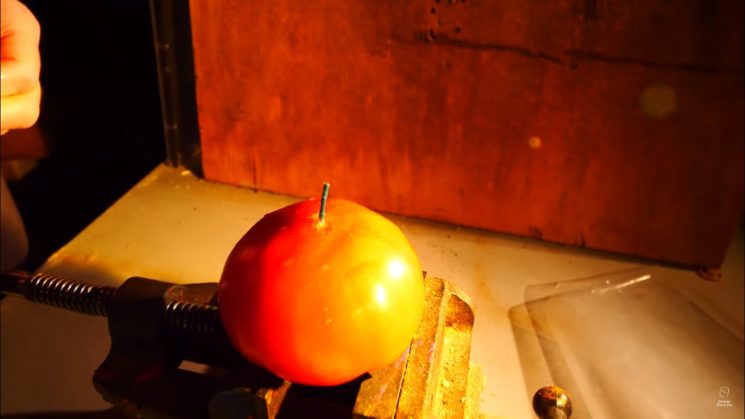 The explosion video looks pretty awesome with this light inside the tomato. When shooting is done, Destin sends the videos to Gordon so he can work out his audio magic. He makes the sounds for both the candle and the tomato video.

For the candle video, Gordon has all the sounds he needs in his library, so he just watches the video and lays them down on the track as he sees fit. However, when he does new stuff, such as exploding tomato in slow motion, he needs to record new sounds. So, he guides us through his recording process.

First of all, instead of a tomato – he uses an orange. He says there’s a technical reason for that: he didn’t have any tomatoes and all the grocery shops were closed. I’d say it’s a pretty good reason. Still, oranges are juicy like tomatoes, so he squished them and squeezed them in front of the microphones. 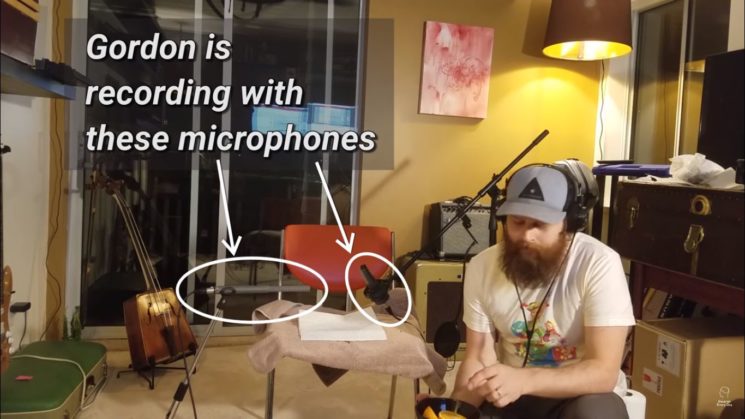 After recording the sounds of oranges being squished, he edits them and cleans them from imperfections. Then he brings them into the session and processes them over the video. You can hear the final results for the candle here and for the exploding tomato here.

Destin announces a Part two video, where he will tell us a bit more about the process and feature a banana and a bottle. In the meantime, watch the video above and enjoy.

Slow motion sound in videos is fake… Well, most of it is

Slow Mo Guys push it to the extreme with glass explosions at over 343,000fps

« Google Drive offers unlimited storage to students and alumni
Do NASA astronauts shoot raw? The challenges of photography in space »