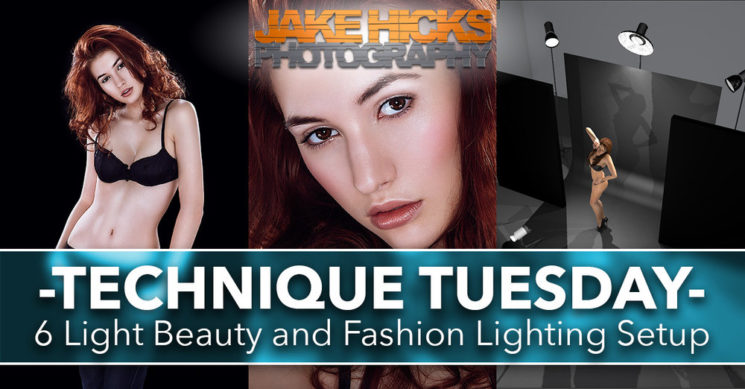 I know it’s extremely trendy right now to say that ‘one light is all you need’, and although in certain situations this is true, a of the time extra lights will likely look better, or at the very least make your life easier.

Now before you rush to the comments section to proclaim the purity and simplicity of a black and white headshot being lit by a single light as being the very essence of great photography, I’ll just add that I agree. Sometimes, complicated lighting and over-lit portraits can certainly get in the way of a subject but conversely, a more visually interesting shot can also be achieved with the addition of more lights to draw in and engage a viewer. 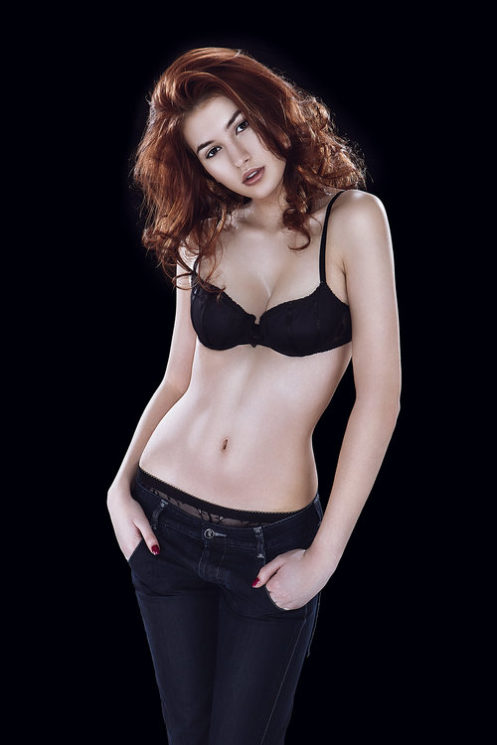 A six light beauty and fashion setup. What are some of the pitfalls of ‘too many lights’?

This setup and shoot was done way back in 2009 and although I don’t create imagery like this anymore due to my new found love of gels, I’ve recently received a few messages asking how it was done after a shared an image from this shoot in last weeks article.

I originally shared the results of this shoot all those years ago but like with any great lightning setup, it doesn’t age and this setup is just as relevant now as it was almost a decade ago.

All those years ago I was heavily influenced by the great lighting masters like Jill Greenberg and this setup is very heavily inspired by her ‘crying baby’ portraits that were so incredibly popular back then. I’ll get onto what I believe makes this lighting so visually interesting later on, plus I’ll also speak about how I would improve this shoot were I to shoot it again today. But for now, let’s take a look at the setup. 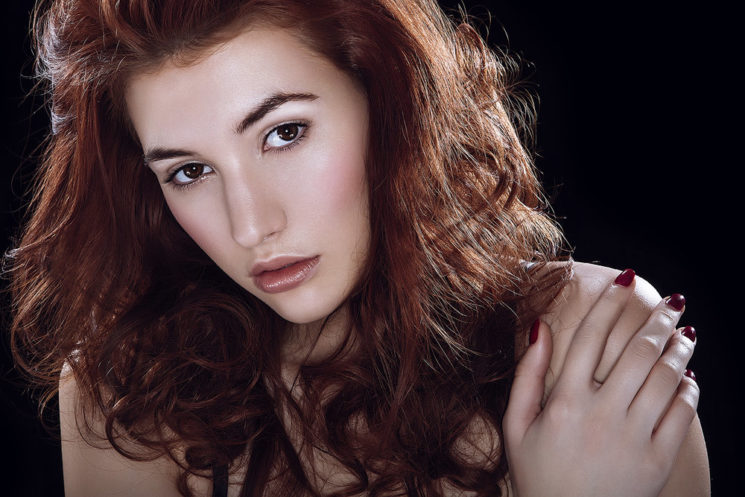 Sometimes, one light is all you need but there are times when you want to make your image stand out or if you’re trying to make a person or product look their absolute best. In this instance, more lights will certainly help you achieve that but how much light is too much light?

Let’s just rip the bandaid off this and say that you’ll need a significant about of kit for this one. First and foremost of course is the 6 lights which I appreciate wont be an option for most, but even if you don’t get chance to test the lighting itself, you can certainly learn how the lighting setup is built and what lighting objectives I had in mind at the time.

Take a look at the diagram below to see how it all comes together. 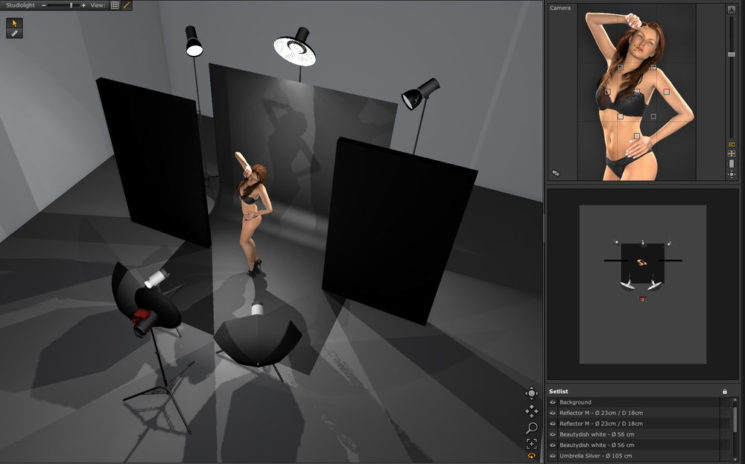 In the diagram above we can see how the 6 lights are placed.

In the image above you should be able to see how all the lights come together.

It’s worth noting now that this lighting software does not currently contain a ring light, so instead I have placed a beauty dish in front of the camera to signify it. The resulting light in the top right final image will be a little off due to this though.

Let’s now break this down to see what each light is doing and why.

First off let’s look at those back reflectors that are acting as hair lights. 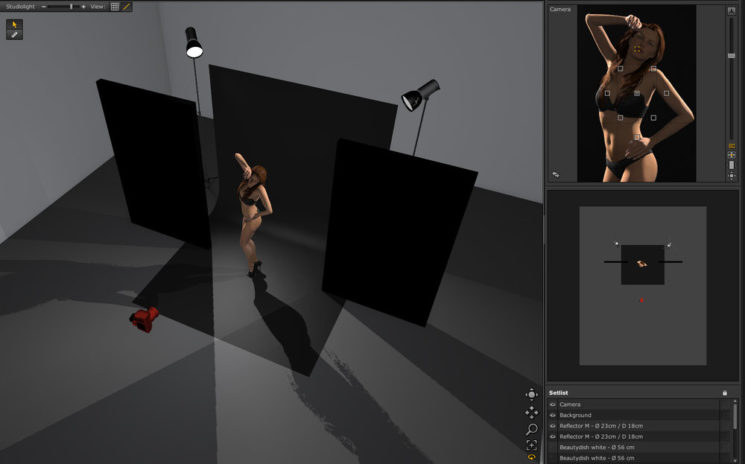 In the diagram above we can see the gridded lights and what they are doing to models skin. Their purpose is to create a rim of light around the edge of the model to maintain a visual separation from model to background. When placing these lights there are things you should be looking for. Firstly, they should be high enough so as to light the tops of the shoulders and as much of the top of the head as possible. They should also be far enough back behind the model so as to not start lighting the tips of the models nose.

This could be argued as not needed but this final third hair light ensures a complete coverage of all of the skin on the model.

In the image above you should see that this third hair light reaches the areas that the other two heads do not. For example on the very top of the head as well as the inside of the models left arm.

When setting this up, it is advised to use a boom if possible. I’d have loved this light almost directly above the models head compared to very much behind her like we see here. Having the light directly above would add a much needed shine to the hair in the crown area of the head. This extra shine adds more depth to a shot and is crucial in doing hair work. As this was not a hair focused shoot we got away with it but the threat of severe lens flare was always an issue as well.

Again the addition of these lights might seem minimal but all of these elements add up to a final, complete look. 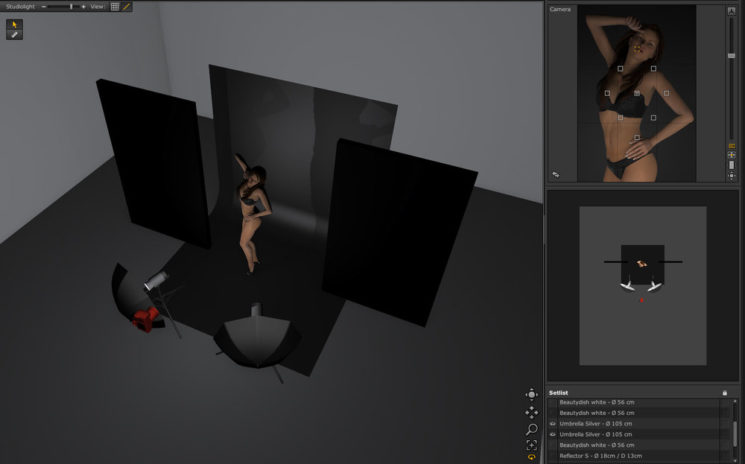 These fill lights are just small silver umbrellas but small softboxes could have also been used instead. In fact, in hindsight the softer light of softboxes is preferable as these are just to add a very subtle amount of light to the underneath shadow areas like chin and eyebrows etc. To make this work, they need to be very low in power to avoid them casting any additional shadows of their own.

Like I mentioned before, this lighting software does not support the use of a ring flash so I have substituted it for a beauty dish here to illustrate the lighting. As a result, the final lighting appears a little odd due to its size. 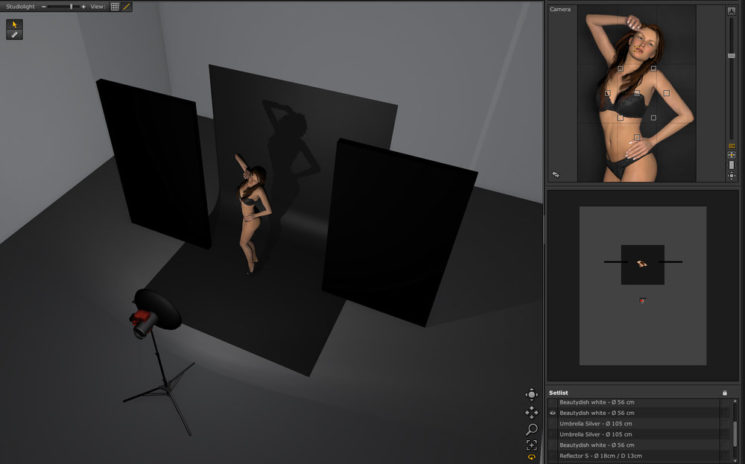 A ring flash is strangely one of the easiest, yet simultaneously the hardest modifier to use. If you’re using a ring flash on its own then it excels in its simplicity and all you have to do is expose the shot for that one light. When you start combining it with other lights in a scene it fast becomes a little trickier as the light starts to stack on top of one another which is never recommended. I advise playing with your distance to the subject as well as with your height to the subject. If you’re finding it tricky to make work then turn off all the other lights and experiment with variations in exposure to see what’s working.

Thankfully, as the years whizz by I feel that I am getting better and better at reading the light and lighting in general. When I shot this nearly a decade ago, I was ‘winging-it’ a little. Sure I knew the premise of what I wanted but at that time I hadn’t developed the ability to read the light like I can now, so with a little more experience under my belt now there are many things about these shots that I cringe about. 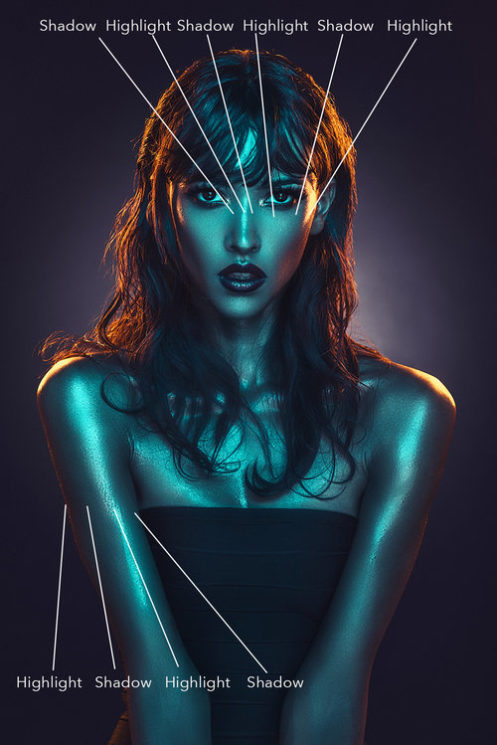 Take a look at the image above to see what I mean by sculpting shape and form through shadow and highlights. Without this, images can look a little flat and ultimately ‘over-lit’.

The main area that is making me wince in the images is that these shots are ‘over-lit’. This means that I feel the light is overlapping in too many areas resulting in a shot that looks a little visually flat and lacking in contrast. If we look at my more recent work you’ll notice that I’m striving for a continued variation from highlight to shadow to illustrate shape and form whereas in these shots, that shape and form is being lost into one continuous exposure.

What I’d Do Differently

So what could I have done differently? Well first and foremost I’d have advised a makeup artist of the exact idea to this shoot and explained that the lighting would be very bright. I’d ask if it would be possible to have a subtle shine to the skin rather then the skin being too matte. This skin shine would help the models facial features like cheek bones, chin and nose stand out giving them that extra dimension. With regards to the lighting; firstly I’d do my best to secure a boom. With this I could have gotten that beauty dish more overhead rather than behind the model, this would have in turn added more shape to the models hair and head. Secondly, I would also have spent more time tweaking the exposure of the ringflash in conjunction with the fill lights. At the moment I feel the fill lights are still a touch too strong which is largely why I feel the images are flat and looking over-lit. Lastly I’d also like to adjust my position with the ring flash, in hindsight I think I was too far away from the model which results in this overpowered lighting effect we see here. Had I come a little closer, I’d have had to turn the power of the ring light down a little which in turn would introduce more shadows towards the edges of the model and thereby bringing back that shape and form I was referring too.

Like I said at the start of this article, there are going to be times when one light will work but if you want to achieve a more flattering portrait or a more engaging shot in general, multiple lights will be the way to go. But how much light is too much light? This all depends on the situation but we need to be careful that too much light doesn’t visually flatten out a shot which results in you losing shape and depth in the subject. As a guide, constantly look for significant variances in highlight and shadow, look for multiple transitions in contrast to help add shape and definition to your subject and as soon as you start to lose this is when you’ve gone too far.

Thanks once again for taking the time to read my articles, I certainly appreciate it and feel free to share this with anybody who you think could benefit from it. I see a growing stigma around at the moment that says ‘true photographers only need one light’ and it’s frankly laughable. There’s a time and place for multiple lights and it’s usually only those that swear by one light who can’t light effectively with more.