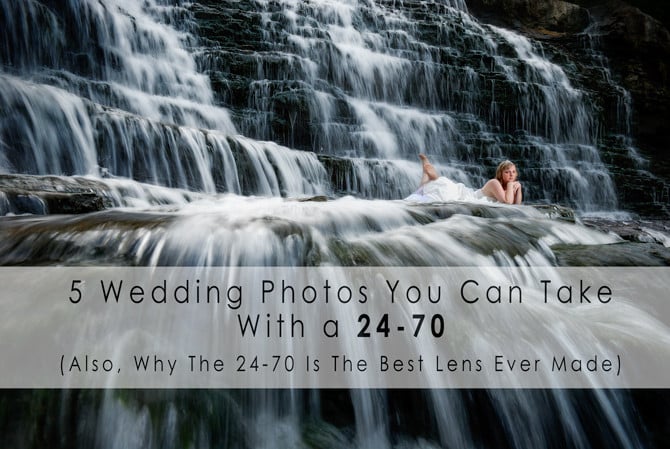 I don’t really have an emotional attachment to my gear.

I shoot Nikon and Canon, I have a few lenses that are my primary choices, I’m not devoted to primes or zooms, I have a mishmash of DIY and name brand mods and grip, and I’m not really that fussy about technical specs.

I am also not too fixated on the cost of gear.

Photography equipment is expensive and there’s not much I can do about that.  If there is a specific piece of equipment that I think I need, I build it into my business plan.  If the cost cannot be justified then I have to figure out a way to work without it.

My goal as an artist is, and has always been to create the most interesting work I can with the equipment that is available to me.

I guess what I’m trying to say is: If you have a visceral emotional attachment to your gear or need justification of your purchase decisions from the internet, you might want to skip this article (and definitely don’t read last week’s post).

So, if you’re choosing to use a 24-70, you need to understand that while it does many things quite well – its not particularly great at anything – like a Swiss Army knife.

And what is the one photography genre where speed and versatility are critical to success?

On the versatility side of the equation, f/2.8 is fast enough to capture most low light settings, like the bride preparing indoors and the ceremony (although many churches are still way too dark to use only available light).

Having a lens with a constant aperture through its entire focal range is also critical.

It is practically impossible to get a consistent look to your work if you are constantly fighting with the changing apertures of a lower cost f/3.5-5.6 lens.  It is also a major headache for anything besides full automatic and TTL.

And speaking of f/2.8 – with a 24-70 f/2.8 you’re never going to get that creamy bokeh that f/1.4’s offer, but again for most weddings and events you can get close enough that your clients probably wouldn’t know the difference.

The zoom focal range covers both 35mm and 50mm – in of themselves probably the two most popular focal ranges.

And, on the telephoto zoom side, 70mm is close enough to photograph details and portraits without too much lens distortion (again, at least within limits that most wedding and event clients wouldn’t notice).

On the speed side of the equation, a focal range of 24-70 is incredibly useful.

There is nothing better than the ability to shoot a wide angle scene, a full length portrait and a head and shoulders portrait in the span of 3 seconds without moving. 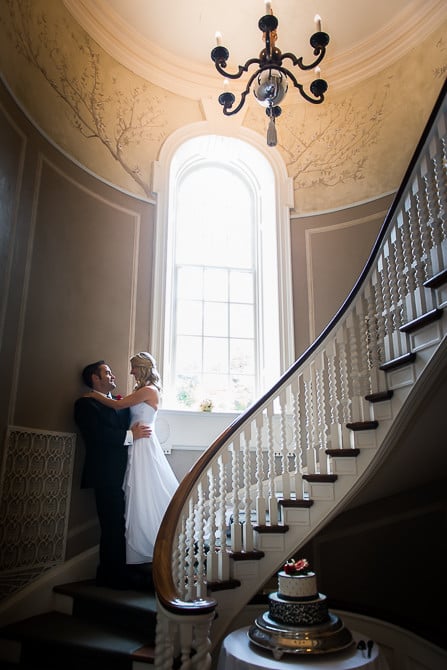 This was taken at 24mm and is an example of a wedding scene where the 24-70 really excels: indoors, low light, tight space.

This hallway may look rather large and grand in this photo, but in reality it was actually a very tight space.

I had to frame this shot to get the full chandelier and the full cake in the frame, and I was able to just make it work at 24mm.  I also needed to photograph this scene wide open at 2.8 to grab enough window light and light from the chandelier without having to resort to an extreme ISO (I was at ISO 1250 as it was). 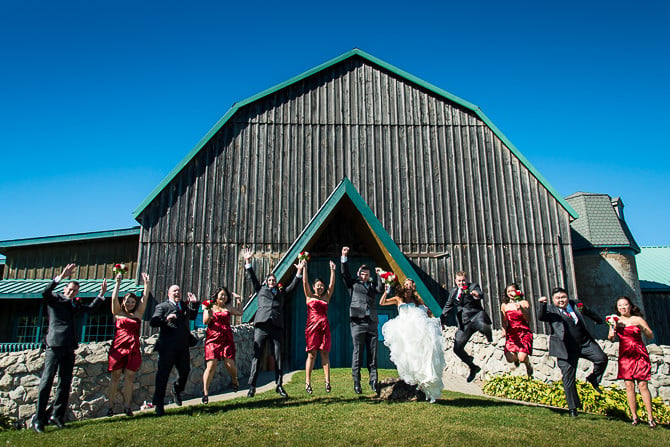 Shooting this photo as wide as I could from up close adds to the drama of the image.

Sure, in this case I could have moved further back and used a longer lens, but the scene would have looked much more compressed and less dramatic.  I also had my flash on full power for this shot – and its not nearly powerful enough to fill all the shadows on this bright sunny day.  Moving further away would have made the flash even less effective (of course the opposite is also true). 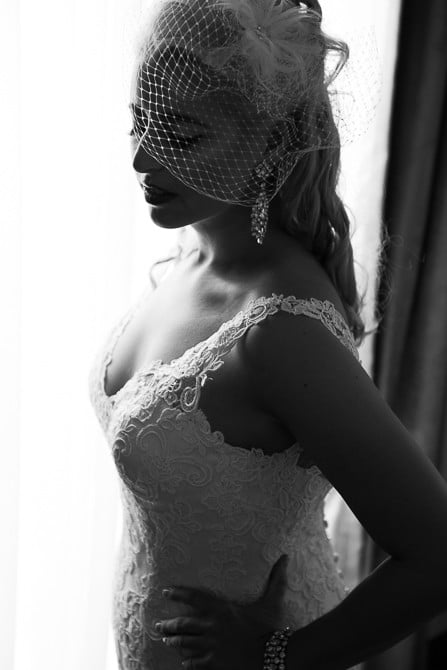 This natural window light portrait was taken at 58mm and wide open at f/2.8.

You can clearly see the lens distortion in this image that results from shooting close up at 58mm (her near shoulder is disproportionately large compared to her head, which is disproportionately large compared to her waist).  However, with a lens profile correction in Lightroom, the distortion isn’t something that many wedding clients would ever notice.

This is a great example of how using a 24-70 allowed me to get the shot I needed with a minimal amount of hassle.  In this case, I was standing on a chair looking down, and from there I just zoomed in an out to frame the image as best as I could.  Without a ladder, a 10 foot ceiling and a whole lot more time, it wasn’t really an option to shoot this same image with a longer lens. 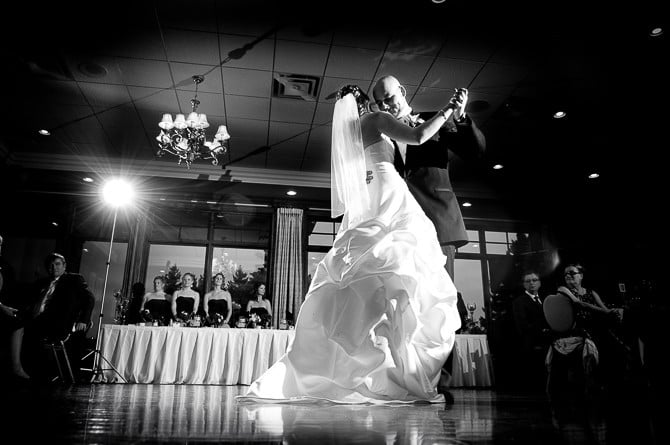 The first dance is probably the one single event that is nearly impossible to photograph without a 24-70 f/2.8.

You are working within a timeframe of 3 or 4 minutes and you need to get a range of wide and tight shots from relatively close range – 95% of which will be rejects.  A 24-70 is really the only way to do it.

You’ll also notice that I’m cross lighting the dance floor with off camera flash.  Using a lens with a constant f/2.8 aperture through its entire focal range is critical because it allows you to use the same lighting settings for the entire dance – as opposed to a less expensive lens that is at f/3.5 at wide angle and f/5.6 at full zoom. 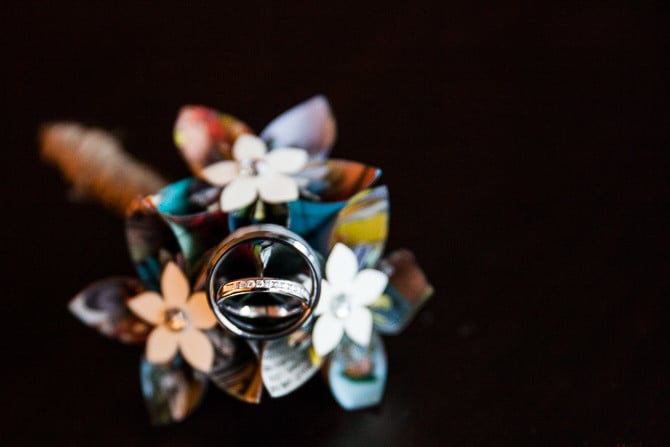 This ring shot was taken at 70mm f/2.8.  I had to crop way in to make it look like I shot this with a specialty macro lens.  Its still not really tight enough and its not very sharp either – but the fact that you can get that close to a macro look with a 24-70 is pretty amazing.

Speed and Versatility vs. Image Quality

Hopefully the photos above demonstrate the incredible versatility of the 24-70 f/2.8 and why it is often the workhorse that professional photographers rely on to get the job done.

No other lens will let you go from wide angle to portraits to rings – and that speed and versatility is often indispensable.

However, from a purely artistic standpoint, it should also be clear there are some compromises involved.

Or, do you prefer specialty lenses that might be better suited for specific images?

What is you ideal wedding lens setup?

Why a 24-70mm lens is perfect for wedding photography

« Candidate for Prime Minister Sued Due to Alleged Copyright Infringement
The Battle of the Nifty Fifty: Canon’s 50mm1.8 vs. Yongnuo 50mm1.8 »