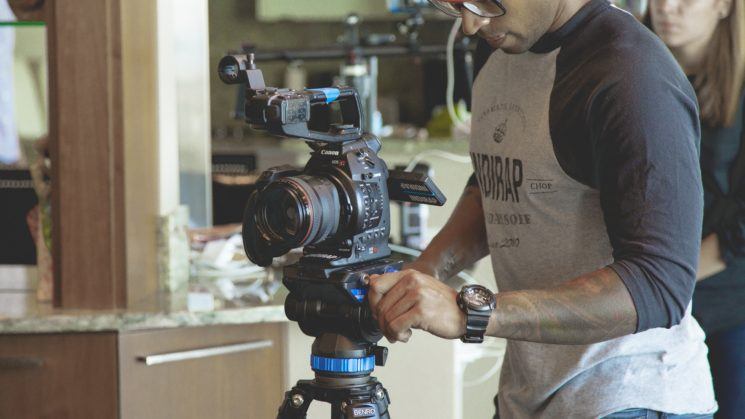 Filmmaking involves a whole lot of knowledge, and if you ask me – filmmakers also use some magic to achieve certain results. Sometimes they use special effects, but on a number of occasions clever filming and lighting are just enough. Ryan Connolly from Film Riot brings you five tricks every filmmaker should know. They are simple, yet very clever ways to achieve great results with minimal investment and post-production.

Sometimes you have no other choice but film in a tiny space. This can often make the scene feel claustrophobic. But the solution for this is creating the illusion of a larger room. When filming a dialog in over the shoulder scene, move the actors and the camera to one side of the room. When shooting the other speaker in the dialog, move the camera and the actors to the opposite side. This creates the illusion of a more spacious room. Just pay attention not to have any identifiers (such as posters in this scene), which could give away that the room is actually small.

This is also useful for filming dialogs. When you need to film the second actor, it includes moving the gear and the lighting. If you’re lazy or have any other reason not to do it, you can cheat the turnaround and more your actors instead of the gear.

This can be done when the background isn’t too prominent, so it’s not obvious. And this is easier when you shoot close-ups, so the background is not too big of a factor. When you’re done with shooting the first actor, have them switch places. Then shoot the second actor, but move the camera so you shoot him over the opposite shoulder.

3. Shoot for the reverse

Sometimes you want a prop to land in a specific spot in the frame. But on a number of occasions, it takes several shots before you make it land exactly where you want it. It can even be dangerous, like with hitting or smashing objects and people. Sometimes it’s not easy to control the prop and stop it in the right place. This is where another simple trick comes to the scene: shoot for reverse.

For example, if you want an actor to “smash” the lens of the camera, make him place the bat near the lens and then move it back fast. When you reverse the shot, you’ll get just the right result, and your lens will remain whole.

Okay, sweat is basically water, but water only doesn’t really work when filming. It runs too quickly and usually isn’t visible enough. There are a few ways to fix this.

First, you can add some glycerin to water, and it will make it stay longer. However, make sure that the actors aren’t allergic to glycerin. Second, you can mix baby oil with water and spray it onto the skin. It’s a much better solution for those with sensitive skin. And if you want that “straight-out-of-the-gym” sweat, let your actor add some Vaseline onto their skin and then spray it with water and baby oil mixture. I believe these could also work for photographers who take fitness shots, so feel free to try them out.

Here’s one trick I especially loved. Whip pan can be a great way to make a transition from one scene to the next, but you can also use it for special effects. Ryan gives an example of performing a whip pan from right to left – starting from the actor throwing an axe. Then he performs another one, again from right to left, but this time he ends on an actor pretending to catch the axe. When he cuts these two shots together, this is the result:

Did you know about these tricks? Do you use them? Are there any other simple tricks you’d like to share? I’d love to hear them.

« Crash drones as much as you like with Microsoft’s new real world simulator
How to turn off that annoying grid in Photoshop when you zoom in. »