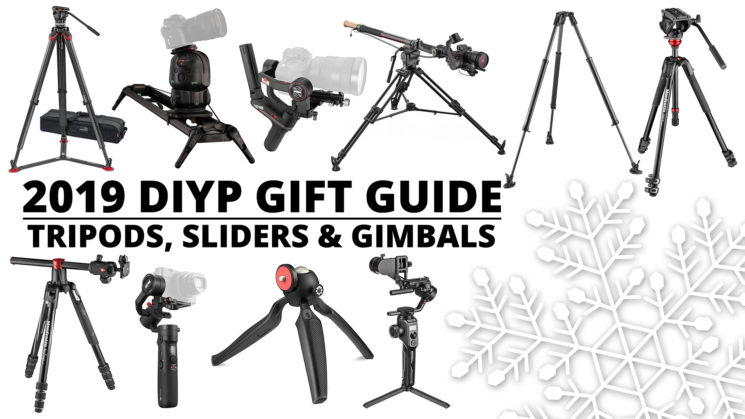 So far in this year’s DIYP gift guides, we’ve covered cameras, lenses, lights and bags. But whether you shoot stills or video, at some point you’ll likely need something to mount your camera to. So here are some of the new ones that have come out over the last year or so and the ones that we use the most. 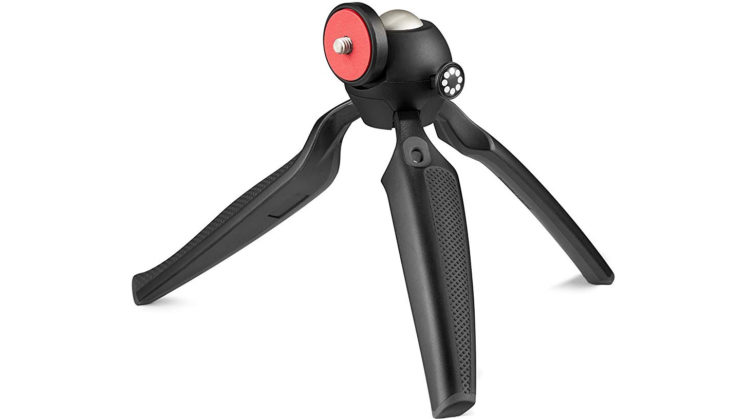 The Joby Handypod is the new reigning champion of mini tripods for me. It usurps the popular Manfrotto PIXI (Amazon / B&H) due to the more ergonomic grip handle which makes it ideal for vlogging, and the fact that you can rotate the ball head on top vertically – perhaps not so useful for most video or photos, but great for Instagram Stories. They’re super handy (the clue’s in the name), and I think everybody should have one of these in their bag, ready to go at a moment’s notice, even if they own bigger tripods. 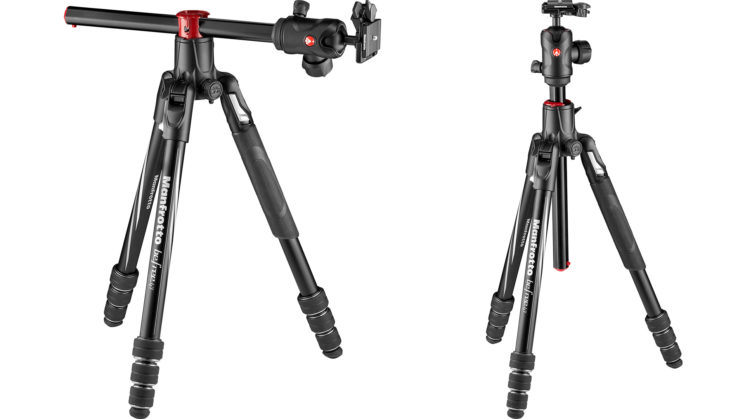 The Manfrotto Befree GT XPro is somewhat unique amongst travel tripods as it offers a centre column that can be rotated 90 degrees, allowing you to align it horizontally. This makes it ideal for both traditional photography as well as things like macro, letting you get closer to the subject without the legs getting in the way. Despite being in Manfrotto’s “travel” tripod category, it works very well as an everyday tripod, too, and has been my go-to lately. There’s a carbon fibre version (Amazon / B&H) of the Befree GT XPro available, too, which is a little lighter, but just as solid. 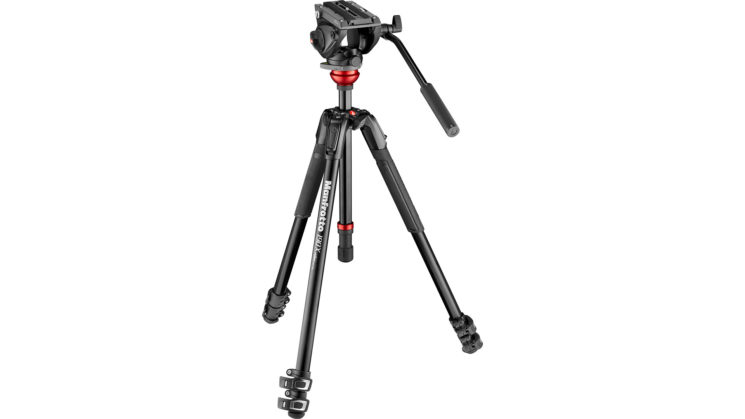 As video tripods go, this is one of my favourites of 2019. It’s based on Manfrotto’s popular 190x legs, but with a centre column that features a levelling base. This means that the head you put on top of it (and your camera) stays level when you pan or tilt. It comes with the Manfrotto 500 fluid head, which offers pretty smooth pans and tilts for a lower budget head and I found it to be fantastic for shooting landscapes, video and timelapse while I was exploring Arizona earlier this year. 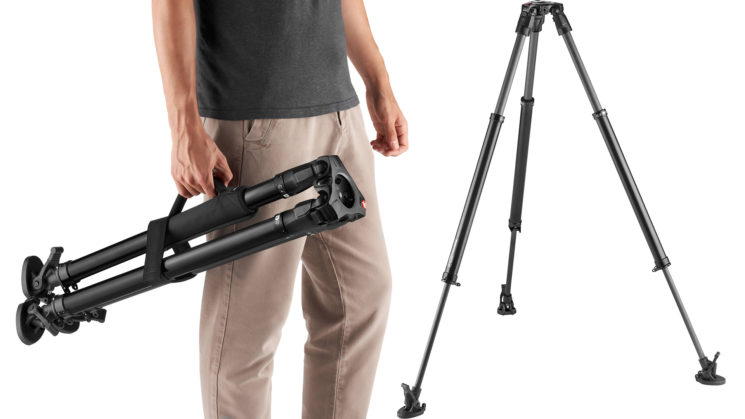 If you’re serious about video, you need a serious tripod. And the Manfrotto 635 Fast Single Leg is a serious tripod. It’s designed for use with Manfrotto’s Nitrotech Fluid Heads and will also be available in a kit that includes the Manfrotto Nitrotech 608 head (Amazon / B&H). The big advantage of the 635 Fast Single Leg tripod is that it can be set up and taken down quickly, keeping you mobile. It requires just a twist of the middle segment on each leg to lock and unlock the entire leg. It also features a built-in carry handle, which makes life on location so much easier when you have to move around a lot. 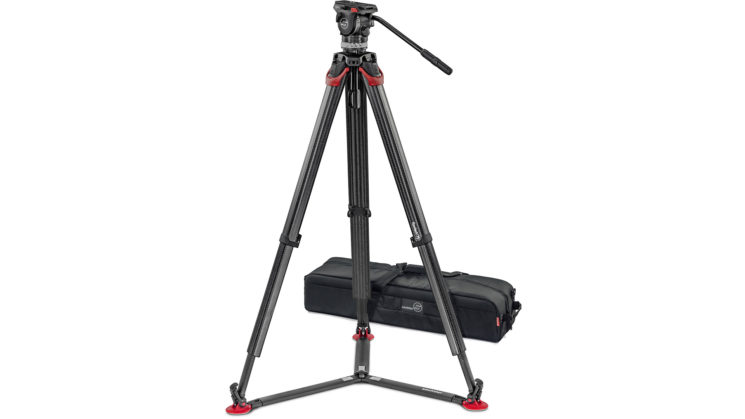 Speaking of serious tripods, the Sachtler Flowtech 75 legs and Ace XL Fluid Head are going to be overkill for a lot of people out there. But as camera rigs get bigger and heavier, with monitors, lights, HDMI transmitters, microphone receivers, V-Mount batteries and all kinds of things attached to them, you need a solid tripod that can hold them. When you buy a tripod like this, you’re buying a tripod for life, that will serve you very well with pretty much anything you choose to mount on it. 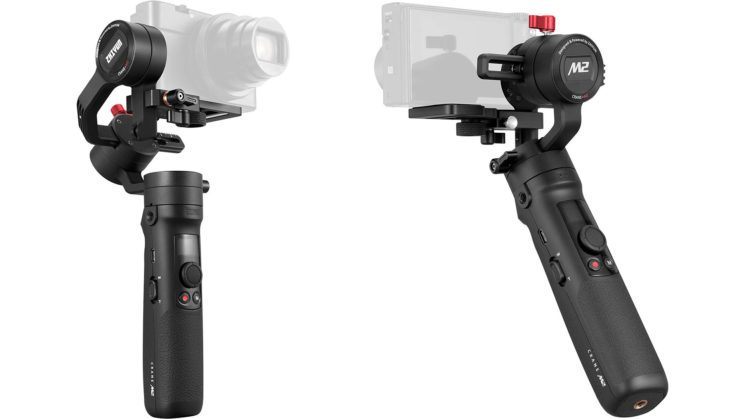 Let’s kick off the gimbals with Zhiyun’s recently released Crane M2. It’s a very small gimbal designed for use with compact and very small mirrorless cameras, although it can also work with smartphones and action cameras, too. It’s a super small gimbal for what it can carry that easily slips into your bag and makes you more inclined to actually use it. I’ve lost track of the number of times I’ve taken a gimbal with me somewhere, but then not used it because it’s too big and unwieldy. The Crane M2 is a breeze to set up and use, though. 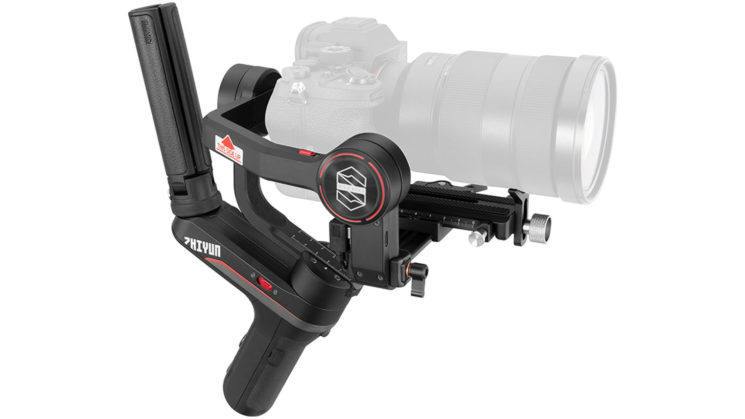 The Zhiyun Weebill-S is an update to the popular Weebill LAB for mirrorless cameras and small DSLRs. It has an updated algorithm, stronger motors, ultra-low latency HD image transition and a new axis-locking mechanism similar to that found in the Crane 3 LAB (Amazon / B&H). It’s a little larger than the Crane M2 shown above, but also features the underslung mode of the Crane 3 LAB, too, which makes for much more comfortable low angle shooting as well as an easier way to switch between high and low quickly. 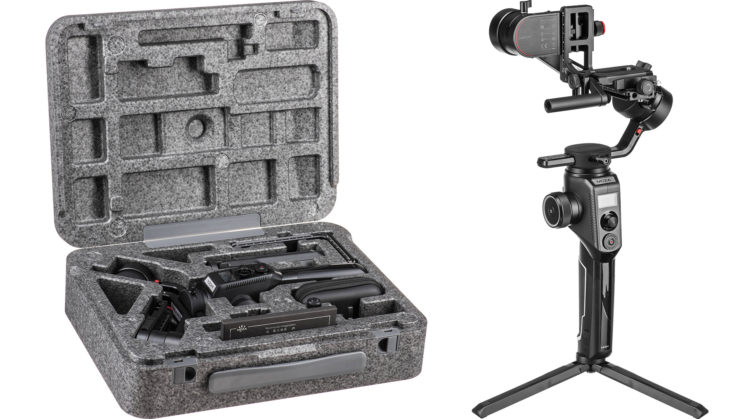 The Moza AirCross 2 is a fairly small gimbal with big ambitions. It can handle loads up to a whopping 3.2kg. Sure, there are gimbals out there that can handle higher loads, but few at this relatively small size. It can also hold cameras like the Blackmagic Pocket 4K (Amazon / B&H) without having to use a cage or offset adapter plates and it will even let you mount the camera vertically, for when you want to be a little “extra” with your Instagram Story production value. 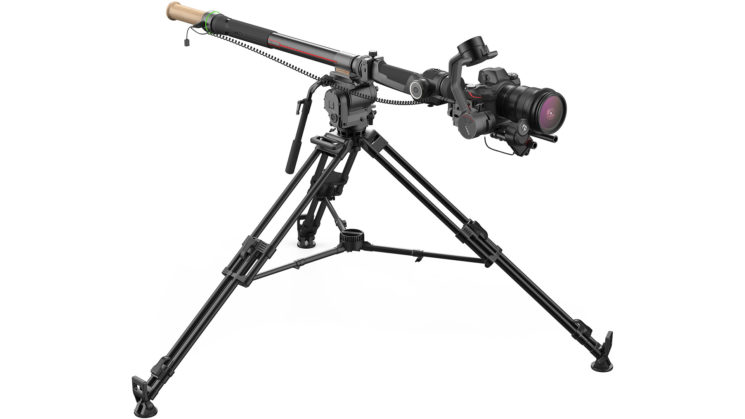 We might as well start on the sliders with the weirdest looking one to be released this year. That’s the Moza Slypod. It’s a “2-in-1” slider and monopod, but it looks like no slider we’ve ever seen before. Instead of a carriage and a standard dual-rail arrangement, this has one tube inside another that moves in and out to move your camera. It’s a slider you just have to really try in order to understand the benefits, but it allows you to get some unique shots that would be difficult or impossible with other types of slider, especially when used in conjunction with a gimbal, like the AirCross 2 mentioned above. 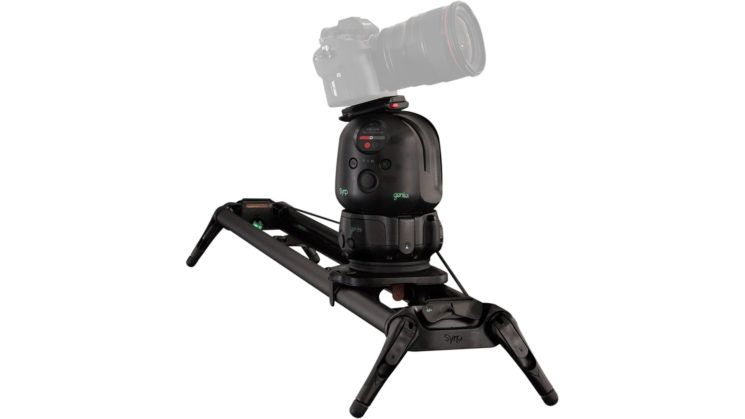 Syrp exploded onto the slider and motion control scene a few years ago and quickly established themselves as a leader in the field. The Syrp Genie II 3-axis kit allows for full movement along the 39″ rail, 180° of tilt and 360° of pan. This isn’t the only kit Syrp makes, but it is one of the most complete. You can always start your Syrp motion control journey with something like the Genie Mini II (Amazon / B&H) and then expand as you go one piece of gear at a time. But it’s a system that’s well worth looking into.

There are so many options for supporting and stabilising your camera these days that it’s almost impossible to settle on just one for all of our needs. Sometimes we need rock-solid stability above all else. Sometimes we need portability. Sometimes we need to move the camera while we’re shooting. And sometimes it needs to move itself and just be left alone to do its thing.

If you haven’t checked them out already, don’t forget to look at our gift guides for cameras, lenses, lighting and bags. Tomorrow, we’ll finish off our gift guide series with those invaluable accessories that make our lives easier and can sometimes be impossible to live without!