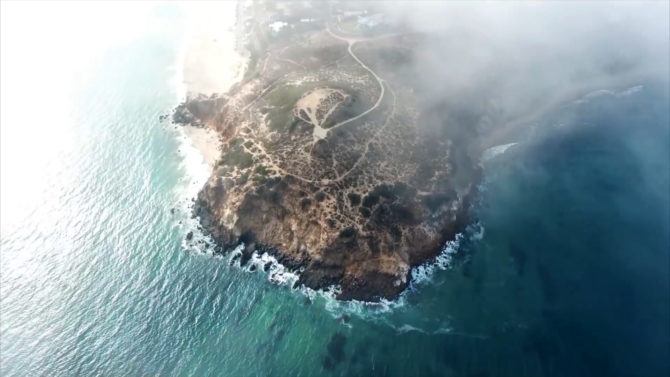 Shooting stills and video with drones is ridiculously popular, and shows no signs of slowing down. A lot of drone shots, though, are very much just the same old thing everybody else is doing. Occasionally, though, you come across something special and interesting. The work of 20-year old Gabriel Scanu is such a thing.

Looking at Gabriel’s Instagram feed, you can’t help but constantly catch yourself saying “wow!”. Based in Sydney, Australia, Gabriel has art running through his veins. The son of a cinematographer, Gabriel was introduced to capturing life on film at the age of 12 and he’s been hooked ever since. While his Instagram does contain locations all over the world, his images of Australia are particularly amazing.

In an interview with From Where I Drone, Gabriel said that since leaving school at 18, he’s worked part time jobs while pursuing his creative passion.

The top-down view of much of his work is like an ultra-high resolution version of Google maps, but captured at the perfect moment. Waiting for just the right light and finding fantastic compositions.

The drone scene in Australia seems to be growing very quickly, and is producing some of the best imagery out there. With deserts, beaches, ocean , snow, and amazing cities, it’s easy to see why.

Gabriel also told FWID that he is inspired by the reaction people have to his work. The positive response and support he gets pushes him to keep challenging his abilities and ideas. The potential to inspire others also plays a big part in driving him and his work.

Gabriel uses a DJI Phantom 3 Pro, shoots raw and processes the images through Lightroom, using several presets and looks he has created. These help to speed up his workflow, but often finds himself making adjustments. For his regular ground based work, Gabriel shoots a Canon 5D Mark III with 16-35mm, 24-70mm and 70-200mm lenses.

We may not all have access to the same types of locations that Gabriel does, but it offers a great inspiration for looking at things differently. We’ve all seen countless photographs of Australia from the ground, just as we may have for our own areas. But seeing this perspective shot so beautifully helps us to view our own surroundings with a fresh pair of eyes.

I’ll certainly be thinking about some of my favourite shooting locations with a different mindset the next time I get to revisit them with a drone.

Gabrial has also started posting some of his footage to YouTube. His editing skills are as good as his photography. There’s a few transition techniques here that I’ve seen used quite a few times with hyperlapse but never before with drone footage. There’s also a little hitchcock zoom in there, too.

Hopefully, Gabriel will produce some much longer video sequences in the future.

You can find out more about Gabriel on his website. You can also follow his drone adventures on Instagram, and it’s an feed well worth following.

Portrait Photography In The Eyes Of 5 Years Olds