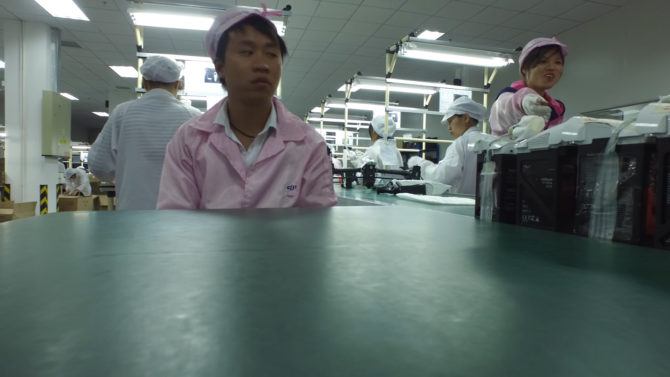 Like most manufacturers, DJI tests its products before they go out the door to ensure as much as possible that they’ll work as intended. They can’t find every fault, but if they do spot an issue, they can remedy it before it’s sold. Unlike most products, most of DJIs can record video. Testing those recording features, and drone gimbals means they have to shoot footage.

Occasionally, some of that footage slips through the cracks and gets shipped out to users. I’ve built drones before, but I think if I had to build them all day long, and only be involved in one small step of the process, I’d probably end up as bored as this guy.

It’s not the first time that snippets of life inside the DJI factory have slipped out into the world. While they’re not exactly the most enthralling of viewing, they sure do illustrate just how mundane the daily life of a production line employee can be.

The production line may be the most efficient way to manufacture products, but the monotony of daily working life doesn’t seem fun.

But, at least now you’ve had a little peek into how they’re made.

It would be interesting to see an overview of the whole process from design to delivery. I’m sure DJI could figure out a way to do it without giving away too many secrets.

What do you think? Would a tour of the production line be cool? Or would it ruin the magic for you? Have you received any accidental footage upon delivery of a DJI drone or any other product? Have you ever bought a “new” camera to find out it was a used or returned camera due to shots included on the memory card from the previous owner? Let us know and share some of them in the comments.

This DIY 90mm f/2.8 Petzval lens looks like it came straight off the production line