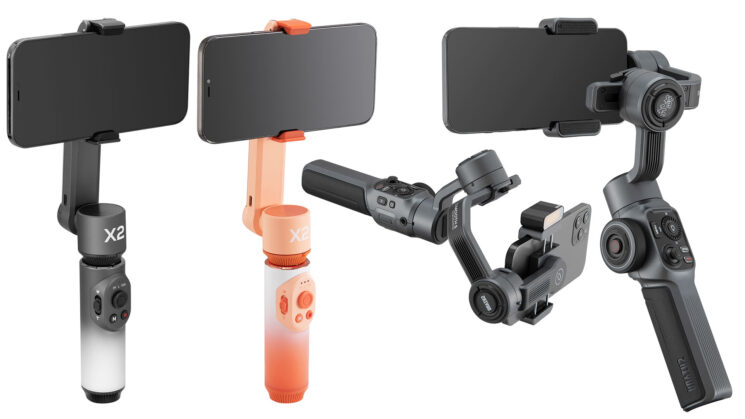 Zhiyun has launched two new smartphone gimbals today. The Zhiyun Smooth 5 and the Zhiyun Smooth X2. The Smooth X2 is the follow-up to the popular Smooth X (review here), a 2-axis gimbal with a built-in selfie stick aimed at social media shooters and consumers who generally want smoother videos from their smartphones.

The Smooth 5, on the other hand, is targeted towards more serious smartphone filmmakers, offering a number of features found in Zhiyun’s higher-end range, like a multi-function focus wheel, exposure control, and various different shooting modes, including the “GO” (Sport) and Vortex modes.

The Zhiyun Smooth 5 is smaller than its Smooth 4 predecessor, but comes with increased performance thanks to stronger motors and a new algorithm to improve stabilisation performance. It has a 3-axis design, allowing for movements on pan, tilt and roll axes. It supports shooting in both landscape and portrait orientation, and can handle large devices such as the iPhone 13 Pro Max, Xiaomi Mi Mix Fold and Samsung Galaxy S21 Ultra.

The all-in-one control panel of the Smooth 5 makes it easy to switch things up and adjust settings with just one hand, without the need to fire up the app. Of course, the Zhiyun app does offer a few extra features, like face tracking, but it means you can still access a lot of the settings and easily switch modes while recording in apps such as Filmic Pro. 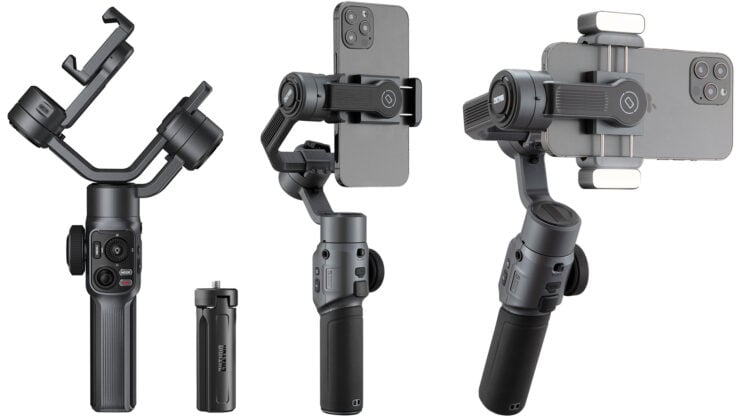 Like Zhiyun’s recently announced Crane M3, the Smooth 5 features a new built-in magnetic LED light, which puts out 580 lumens. Nope, it won’t compete with daylight, but it will offer a little fill light in harsh conditions or light you or your subject up when it’s dark.  It offers stepless dimming controls and can be attached to either side of the phone, depending on whether you want to shoot horizontal or vertical.

The Smooth 5 also works with Zhiyun’s ZY Cami app, letting you edit your footage right from within your phone using the Smart Editor’s templates to produce videos in just a few clicks. Of course, there’s nothing to stop you using your footage with something that offers a little more control, like Adobe Premiere Rush, either.

The Zhiyun Smooth 5 is available to buy now for $169 on its own or in a combo package for $219 that also includes a mini tripod, carrying case and the magnetic fill light.

The Zhiyun Smooth X2 is a small folding gimbal that can easily slip into your pocket when not in use, just like the original Smooth X. It’s a 2-axis gimbal that’s designed to be as small and lightweight as possible. Like its predecessor, it features a built-in selfie stick allowing you to film yourself while giving you plenty of room in the frame to include much of your environment behind you. Ideal for travel vlogs. 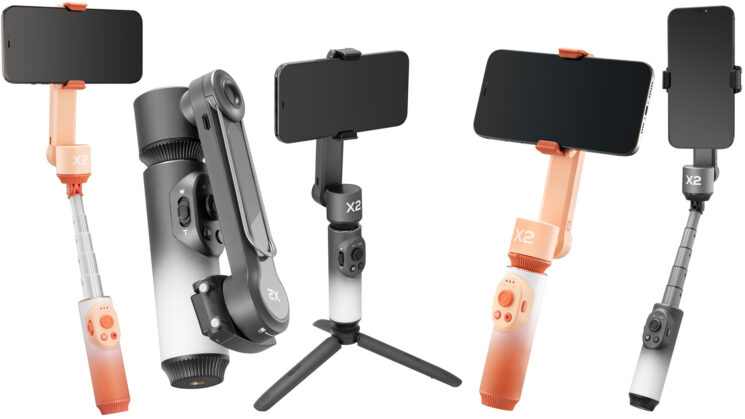 While the physical design of the gimbal appears largely unchanged from the original, it comes in a couple of new paint jobs, with either a black or pink (it looks more peach/orange to me, though) gradient. It does feature new magnetic attachment points, though, for attaching magnetic fill lights. The Smooth X2 can now also lock – something new over the Smooth X – turning it into a small fixed tripod (or essentially a monopod with feet if you have the selfie stick extended).

The Zhiyun Smooth X2 is available to buy now for $89 on its own and is also available in a combo package for $219 that also includes a mini tripod, carrying case and the magnetic fill light.

« Instagram pays creators $35,000 to get off TikTok and use Reels instead
Follow these five tips to take more striking photos »