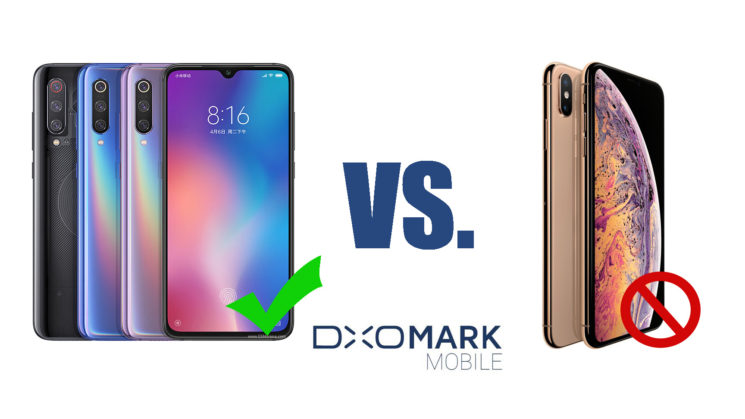 Xiaomi, a Chinese iPhone competitor, has beat out iPhone in the latest round of camera comparison. Well, at least according to the DxOMark tests. Comparing the new Xiaomi Mi9 and the iPhone XS Max, DxOMark ranked the Xiaomi higher, with the 107 overall score compared to the iPhone’s score of 105.

According to the tests, the Mi9 beats the iPhone X Max in flash and zoom with a pretty big difference in points. It’s also better when it comes to exposure, color rendering, noise, and bokeh. On the other hand, the iPhone X Max was scored as better at autofocusing, as well as texture and artifacts. The overall photo score is 112 for the Mi9 and 100 for the iPhone XS Max.

When it comes to the video score, color, autofocus, and texture were rated as better in the Xiaomi Mi9. But, the iPhone XS Max won the categories of exposure, texture, noise, and artifacts. Still, the overall video score is 112 for the Mi9 and 96 for the iPhone XS Max.

Interestingly enough, the DxOMark didn’t specify the “selfie score” of the Xiaomi Mi9, but the iPhone X Max’s is 82. Yes, DxOMark tests that now, too.

Here are the key specs of both phones’ cameras:

You can check out the details on DxOMark’s website, for the iPhone XS Max here and the Xiaomi Mi9 here. Although the score isn’t much higher for the Mi9, it still beats up the latest iPhone in terms of camera. And considering that the iPhone XS Max costs $1,100 and the Mi9 will likely be around $450… Well, I think we have a winner. Well, at least in my opinion, since I would never buy an expensive smartphone.

[via Cult of Mac]

« Light is teaming up with Sony for the next generation of multi-camera smartphone
Should you follow or break the rules in photography? »