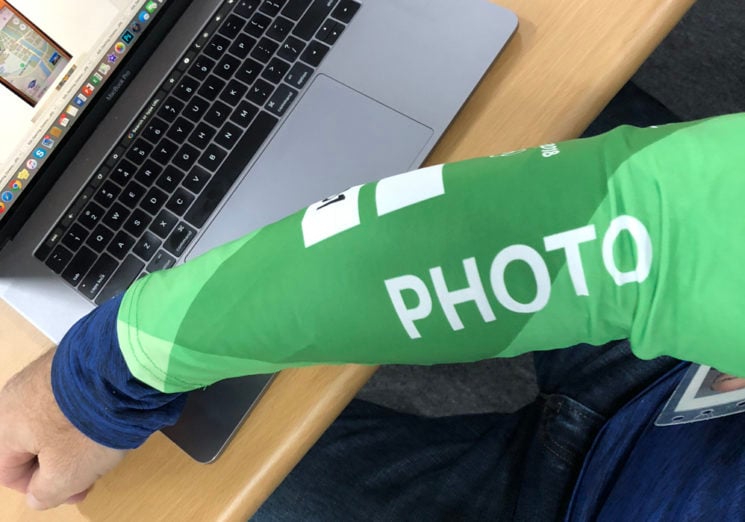 Yesterday was a really horrible day for me. But before I tell you all the story, I should preface this by saying that even though yesterday was brutal, I know that I am at the Olympics and lucky to be here.

OK, I got that out the way, so here it goes.

After staying up until 2am on the day of Opening Ceremonies, editing photos and writing blogs, I was exhausted and went to bed. I had a free day with no hockey commitments and was hoping to sleep in a little before heading up to the mountains to shoot some images for a client.

Around 8am, I was woken up by my roommate (I am sharing a 3 bedroom in the media village). I met him a couple of days ago when he arrived from the East Coast. He told me that he had locked his keys inside his room.. He asked if he could use my keys to get in and out of the building to get his replacements. My keys are hanging off of my credentials, as well as my green photographer’s sleeve. I handed this to him and he was off to get his replacement key.

He returned about 10 minutes later happy to have his new key. He handed me my credentials back, but the green sleeve was not there. I freaked out and said “Where is the green sleeve?” And he said “I am not sure” and went outside looking for it. He searched everywhere but the sleeve was nowhere to be found. Since he is not a photographer, he had no idea how important this sleeve was.

Now, at this point, you might be thinking “what is the big deal about the sleeve?” Well…the shooting sleeve is what allows us photographers to get into our photo positions to shoot. No sleeve, no shooting!

Here is a photo of my green sleeve (with the number not shown).

I asked him to go out and look again. He did, along with a couple of other people, and he could not find the sleeve. Needless to say, I was not happy.

The good news is that I did not have any contractual obligations yesterday, other than shooting the team photo for the men of USA Hockey. So, I made the 40 minute bus ride up the Main Press Center to get a replacement sleeve, only to be told that this would not happen. They told me that I would have to leave the Olympic grounds and head to the police station downtown and file a police report. All I could say was “ARE YOU SERIOUS?” And then I asked the people how I was supposed to find this police station. She pulled up the location on her iPhone and said “you should go here.” 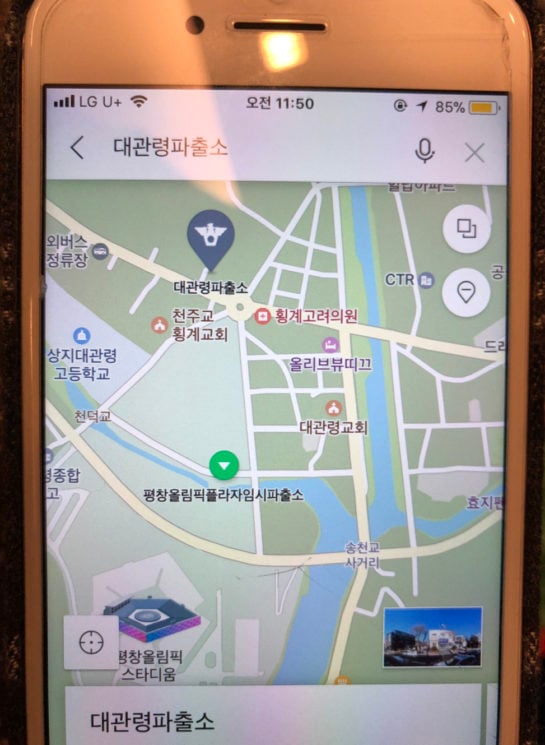 Now, I don’t know how many of you have traveled outside your home country, but with the language (and characters) being completely different from English, I was really concerned. But I navigated a couple of press buses, walked for 15 minutes and found the police station. And the whole time all I could think about was, “I should be shooting some events right now!”

I walked into the police station, assuming that someone there would speak english but that was not the case. Using hand signals and then switching the Google Translate on our iPhones, I explained the situation. They were very nice and said that they would create a police report. I tried to tell them that time was of the essence since I had to get to the hockey arena by 4pm. This was now 1:30pm. 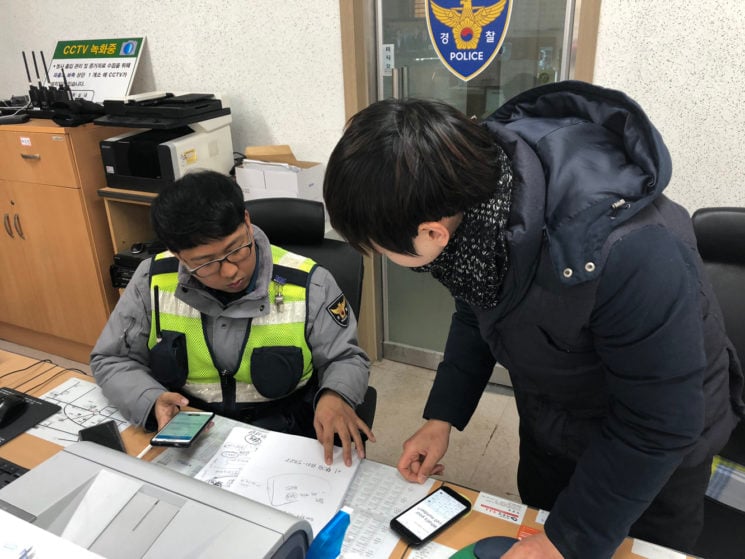 Here are the police officers working on my report.

The officers told me that it would take at least 15 minutes to write up the report, so I got my laptop out and started editing photos from the Opening Ceremonies the night before. A couple of the police officers stood behind me and loved seeing what I captured. I told them that if they could write the report faster I would send them some photos (which I will). They cranked out the report. And then I said to one of my new police friends “How can I get back to the Main Press Center quickly?” and they were so nice, they said “we will take you in one of our police cars – hop in.” 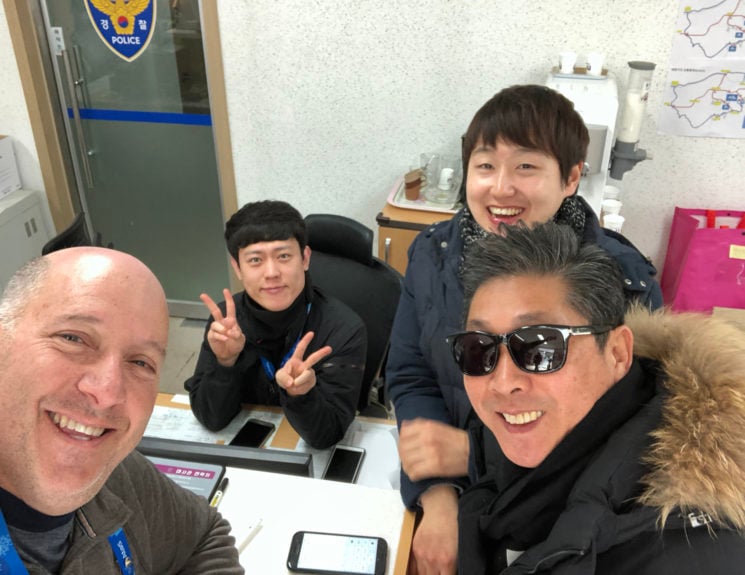 But not before I took a photo with these awesome guys!

So I walked out with one of the officers and we got in one of their police cars, and he drove me right to the MPC. At this point, I was so relieved and thankful for their help, that I thought I was home free. I ran into the press center and handed the photo desk my police report and asked for a replacement sleeve. Their answer was “we will let you know if this is approved in the next 24 hours.”

I was trying to stay calm, since I knew that these lovely ladies were doing their job, but inside I was in full blown panic mode. I said to them “So you are telling me that I can not take any photos for the next couple of days?????” And they told me that getting a new sleeve was like starting my application as an Olympic photographer over again.

The Manager of the photo desk told me that there was absolutely nothing that they could do about it, and that I would have to make the bus ride back the next day if this was approved. She was kind enough to give me her cell phone number and said that I could check in with her the next day.

Knowing that I was in time crunch, and hoping that I could get on the ice without my sleeve (since this was a team photo and not an Olympic event), I high-tailed it to the bus stop. It was now 2:30pm. I had to wait 25 minutes for the first bus, take a 40 minute ride to the Media Village, and then hop on another bus to the rink. This whole process took a really long time and I arrived at the rink as the team was grouping up for the shot. I literally made it with 2 minutes to spare (skipping much needed food and a bathroom break). An hour and a half later I had the team photos and photos of the practice.

But I knew that I was unable to shoot anything else at the Olympics if the sleeve was not replaced!

That evening, I sent a text message to the manager of the photo desk and she wrote back telling me that she was pulling strings for me and that she hoped to have it resolved in the morning. That was a HUGE relief, since I probably would not have slept last night without knowing that this saint of a lady was helping me out. Late last night she sent me another message saying that we should be all set in the morning.

Last night, I went to dinner with some of my friends from USA Hockey and had Korean BBQ and a couple of large beers to calm the nerves. That helped!

The lovely lady started work at 7:30am this morning and I sent her a text at 7:45am. The news was good; she had my replacement sleeve. 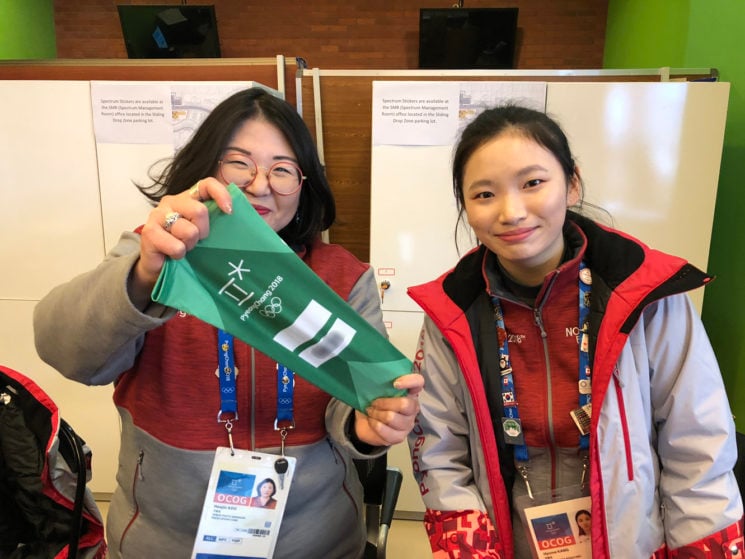 The bad news is that I had to make the hour and a half round trip to the MPC and would miss most of figure skating, but at this point I was just happy to be back in business, and be ready to shoot the first hockey game for the women of Team USA. When I got to the photo desk and filled out the forms, she pulled out my new sleeve and I gave her the biggest hug in the world!!!!

This was definitely the most stressful thing I have ever had to deal with at any Olympics. But I have to tell you all that EVERYONE I dealt with was amazing. The photo volunteers, the police, and countless other people who helped direct me to where I needed to go.

I wanted to share this story with you all because, most people probably think that we show up to events like this, take photos and have a great time. The Olympics is the most stressful month of my life under normal conditions. Adding something like this was beyond stressful. I tried calling home to talk with my wife, but was too upset and stressed to have a conversation with her. Shooting the Olympics is awesome, but it sure isn’t a walk in the park. And now you know a little more about my experience here, and you will look at your TV, see all those people wearing the green or blue sleeves (blue sleeves allow us to get down on the Field of Play) and think “those are important!”

It was a brutal day, but it is over now. My new roommate felt really bad and even offered to compensate me for the lost time. But I know it was not malicious and heck, I ended up with a good story to tell. Onward and upward – time to get shooting!

Jeff Cable is a world-renowned, five-time Olympic photographer having covered Beijing, Vancouver, London, Sochi and Rio. He is one of the most sought-after presenters and educators in the photography space. You can find out more about Jeff on his website, follow his adventures on his blog, or reach out to him through Facebook. This article was also published here and shared with permission.

Photographer gets hit with the worst first pitch ever

Is losing your camera the worst end to a trip ever?

The 2017 Karma reviews are coming in – “The second worst drone I’ve ever flown”
« Photographer: 1, Cheap wedding dress: 0
Make your own DIY kaleidoscopic lens filter for only $20 »