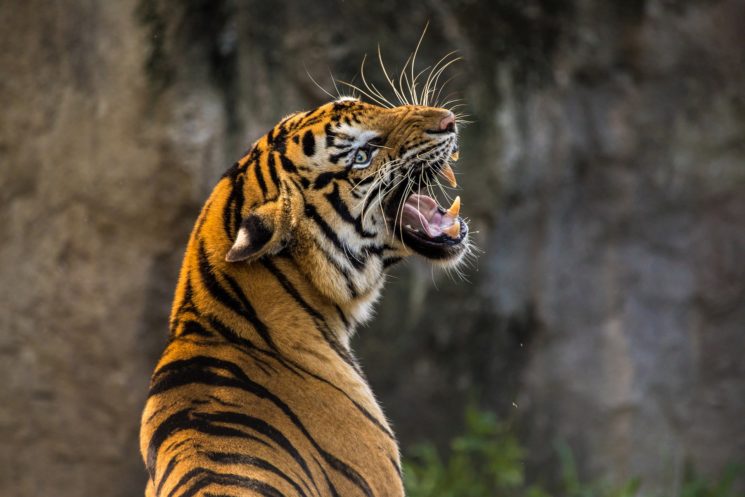 A young woman from India recently had a close encounter with a tiger, which she succeeded in fighting off with a stick. The story is impressive as it is, but what’s even more impressive is what she did right after the fight. With her face covered in blood, she took out her phone and–no, she didn’t call a doctor–she took a selfie.

Rupali Meshram, 23 told the BBC that it all started when she heard one of her goats scream outside. She ran out of the house and saw a tiger attacking the goat. She reportedly picked up a stick and hit the tiger, which then attacked her. Fortunately, she managed to scare the tiger away and then her mother dragged her back inside the house.

Covered in blood, Rupali didn’t seek medical help immediately. She took her phone and took a couple of selfies first, which she posted on Facebook. It happened last week, but the selfies and the bizarre fight came to light only a day ago.

As the BBC reports, Rupali suffered superficial injuries to her head, waist, legs, and hands. Her mother was also injured, but they have both made full recoveries. As for the goat, it didn’t survive the attack.

A doctor who treated Rupali said that she was courageous to fight off a tiger with nothing but a stick. He added, however, that she was lucky that the animal didn’t bite her. Indeed, it’s insanely luck that both Rupali and her mother suffered only superficial injuries.

Personally, I find the entire story incredible, both the fight with the tiger and taking a selfie after it. I remember a report from 2016 stating that half of all selfie-related deaths occurred in India. According to India Today, taking selfies is no less popular in 2018. Also, I can’t help but think about “selfitis,” a mental disorder related to excessive selfie-taking.

I’m not sure taking a selfie would be the first thing I’d do after chasing off a tiger with a stick and getting scratched by the huge animal. Heck, I don’t think I’d be brave enough to get out and try to fight the animal in the first place. No matter how crazy this may seem, I’m glad that the girl at least didn’t try to take a selfie with the tiger.

Woman shoots herself while posing with a shotgun for a selfie