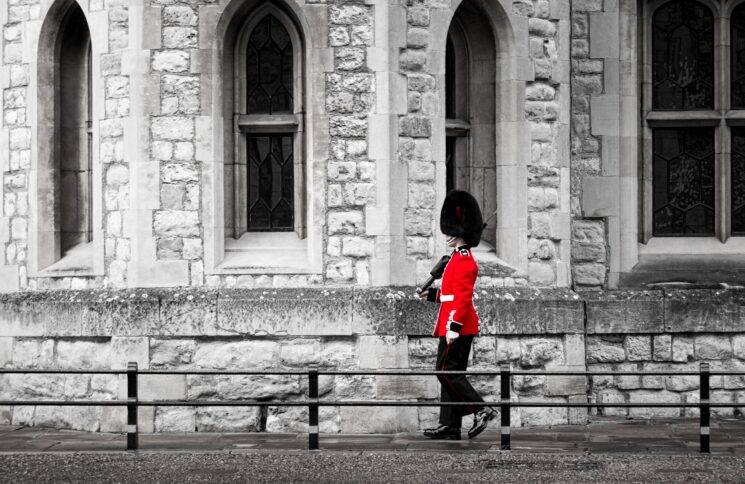 A group of ten world-renowned wildlife photographers have teamed up with animal activists PETA to send a letter to Britain’s Ministry of Defence (MOD). The letter requests that the Queen’s Guard no longer use real black bearskins in their uniform, particularly in the ceremonial helmets.

The letter states that “the only way bears should be shot is through a lens”, and asks Secretary of State for Defence Ben Wallace to change to using sustainable faux fur for the uniform instead.

According to the letter, a single helmet takes the skin of one black bear to create and the photographers argue that many of these bears that are killed could be mothers with young cubs, leaving them orphaned. It’s not just a case of killing one bear if that’s the case, but a whole family.

Currently, five regiments of Queen’s Guards have the privilege of wearing the bearskins, commonly referred to as ‘caps’. They were first worn in 1815 following the Battle of Waterloo with Napoleon. The tall hats were said to make the soldiers look taller, and therefore more intimidating. A single cap if looked after well can last around 80 years.

According to the MOD, 110 individual caps were purchased in 2020, at a cost of £145,000. This source continues to deny the previously given excuse of the bearskins being a part of the Canadian Government’s annual bear cull to control numbers. The photographers and PETA had already refuted this saying that there was no evidence of this in Canada.

“The MOD receives the final product from our contracted suppliers and is not involved with the licensed cull sanctioned by
the Canadian government,” says the MOD.

The document also states that currently “no suitable faux alternative is currently available” with trials having found that the faux fur became quickly waterlogged in rain and didn’t stand up to wind. PETA however, say that in conjunction with luxury faux furrier Ecopel they have developed a fur substitute that doesn’t require the killing of any wildlife.

An independent fabric technologist examined the faux fur and has stated that it actually outperforms the real skins in five different areas of testing, including water resistance. PETA say that there are no excuses left, saying that “we are urging the prime minister to bring faux-fur caps into service immediately”. The fabric has been offered to the MoD completely free of charge until 2030 saving taxpayers money if adopted.

As wildlife photographers who have spent our lives documenting the beauty and fragility of the natural world, we are acutely aware of the need to protect – not pillage – the living planet, which includes the animals we share it with. It is for this reason that we ask you to stop funding the slaughter of black bears for the Queen’s Guard’s caps.

A parliament petition has been created in support of PETA and the wildlife photographer’s campaign that currently has over 100,000 signatures which means that the issue will be debated in Parliament.

The UK government responded to the petition on 11 February 2022 stating: “Currently we have no plans to end the use of bearskins. Bear pelts that are used are the by-products of a licensed cull by the Canadian authorities to manage the wild bear population.”

This is somewhat confusing since according to the MOD itself in the document released under the Freedom of information Act, the procurement of the skins from a government cull is denied.